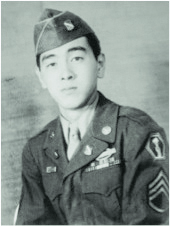 Ninety-nine years ago, on January 3, 1924, Asa Asami Higuchi was born in Honolulu to Sadami and Chie (Matsushita) Higuchi, who emigrated from Kumamoto Prefecture, Japan in 1910 and 1914, respectively. Sadami worked for the OR&L Company and later retired as a gardener from Mid-Pacific Institute.

Asami (or “Ace” as he was known) attended McKinley High School and graduated in 1942. He immediately registered for the draft on June 30, while working at Hawaiian Pineapple Company. He enlisted in the Army a year later on March 24, 1943. He was sent to Schofield Barracks with other new volunteers and housed at the tent city nicknamed Boom Town. They were destined for the newly formed 442nd Regimental Combat Team, which on Jan. 22 had been authorized by the War Department as consisting of loyal American citizens of Japanese descent.

On March 28, the men were given an aloha farewell ceremony at ‘Iolani Palace before leaving for San Francisco on April 4 on the S.S. Lurline. Ace and the other new soldiers were then sent for training at Camp Shelby, Mississippi.

The 442nd left the states on May 2, 1944, in a convoy of 100 ships bound to Naples, Italy. After nearly a month of seasickness, they arrived on May 28 and were soon sent from Anzio and around the recently liberated city of Rome to their bivouac at Civitavecchia. There, they met up with the famous 100th Infantry Battalion who had been fighting in Italy for eight grueling months.

The combined 100th/442nd entered combat together on June 26 near Suvereto in the Rome-Arno Campaign. During the summer, while the Combat Team was in the town of Vada on a break from the front lines, Ace was one of eleven 442nd men chosen to represent the Fifth Army at the Allied Swimming Championships held in Rome. The 442nd team won the Mediterranean Theater title against competition that included former Olympic and national champions from all the Allied armed forces in the theater.

Higuchi was present for all the action seen by the 442nd in Italy. The Combat Team left for France on Sept. 27, where they fought in the Rhineland-Vosges Campaign. The 442nd liberated the important road junction of Bruyères, followed by Biffontaine and the famous “Rescue of the Lost Battalion” – the 1st Battalion of the 141st (Texas) Infantry that had advanced beyond its support and was unable to extricate itself.

Following the Vosges, Ace went with the 442nd for participation in the Rhineland-Maritime Alps Campaign in Southern France beginning in late November.

By January 1945 – 78 years ago – the 442nd was in the area of Nice, Menton, and Sospel. This part of the war was nicknamed the “Champagne Campaign” as the men were able to visit the bars and cafes of the French Riviera as their mission in the Maritime Alps was a defensive one to protect the Franco-Italian border.

During the occupation of Italy, Ace again participated in the 442nd swim team – giving an exhibition at the British troop’s “swanky” Kingfisher Club in Milan.

Ace returned home to Hawai‘i on Dec. 17, 1945, on the troop ship USAT Aconcagua, one of 551 American personnel aboard the ship. Hundreds gathered to greet the soldiers before they were taken to the Army Separation Center at Fort Kamehameha, given passes and told to return in a few days for their discharge from the Army. He returned to his studies at the University of Hawai‘i where he rose to the rank of Major in the ROTC program. He graduated in 1949 with a degree in sociology and psychology, and began working for Hawaii Department of Public Welfare. He later earned a graduate degree in social work.

In 1951, Ace married Edna Imahiro in Honolulu and raised a family of two children. In the post-war years he was an active member of the 442nd Veterans Club. In 1979, he retired from UH as Associate Dean of Administrative Affairs. He then worked for the East-West Center at UH.

Asa Asami Higuchi passed away on July 22, 2021, and was buried with his wife, who predeceased him in 2008, in Diamond Head Memorial Park.