In 1932, Yoshio and Miyako Hori brought two babies into the world: their son, Richard Yasuo Hori, and their bakery. Yoshio, a former mechanic, opened his shop in the back of his Uncle Ayataro Nanbu’s hotel located in the North Kohala community of Kapa‘au on the Big Island. The sign maker mistook the name “Hori” for “Holy,” which resulted in a major typo; but the name stuck. Holy’s Bakery churned out hundreds of loaves of bread and baked goods daily for grocery stores throughout Kona and Hilo. Even through World War II, the Hori family continued to serve their baked goods to hotel patrons and even to the U.S. military.

Richard, better known as Yasu, met the love of his life, Janet Cosbodillo, at Kohala High School, before leaving school to support his father in the bakery. Yasu and Janet married and raised five children in Kohala, including their sons Joel and Richard Jr. (Dickie). Joel and Dickie fondly remember growing up around their Grandpa Yoshio, hanging out in the bakery when they weren’t supposed to and taking naps in the storeroom.

“When we were young, we lived so close to the bakery, we could hear the mixing machine going. So, I always got out of the house and went to see what my dad was doing,” said Dickie. “He was through and through a baker. Everything was about baking for him.”

In 1964, Yasu and Janet moved their family to Honolulu, where Yasu worked at various bakeries. They returned to Kohala in 1970 at Yoshio’s request to assist with the booming business. Around that time, Holy’s Bakery started selling their famous frozen butter pies. Janet contributed her talents to the family business as well. She skillfully decorated wedding cakes with her special butter icing.

Nearly a decade later, Yasu, Janet and Joel moved back to O‘ahu in 1979 to open Holy’s Bakery in Mänoa at the intersection of East Mänoa Road and Lowry Street. The Hori’s worked hard to bring their fruit pies and baked goods to neighborhood markets, convenience stores, hotels and restaurants but, unfortunately, it wasn’t enough and the family closed the store in the ’90s. Yasu and Janet decided to retire and return home to the Big Island while Joel took a job with the Federal Aviation Administration as an air traffic controller. Joel and his wife, Jan, stayed in Mänoa and raised their three children: Matt, Lindsey and Drew Chun-Hori.

Although the shop closed, the family’s love for baking never ceased. Joel and Yasu continued crafting delectable pies as gifts for friends and family. As the years went by, Matt, Lindsey and Drew, along with their parents, realized that they wanted to continue the Hori family’s legacy of baking – they wanted to open a new shop.

With Yasu’s help, the family began experimenting with recipes and flavors in their home kitchen. Jan recalls how she and her father-in-law worked together to bring the Strawberry Guava pie to life. As for Drew, he’ll always have a special place in his heart for the Hawaiian Passion Pear pie with the Hawaiian topping – a buttery, soft coconut crust that Yasu learned how to make from his relative Tokuo.

“I just remember the first time I tried it. It was the first time we ever put on a different topping instead of having just a double-crusted pie. It was something new and something I couldn’t get over … It was perfect.”

Just as he had done for his father, Yoshio, 40 years prior, Yasu moved back to O‘ahu to help Joel’s family with the opening of the new store. Dickie came down from Kohala to help his younger brother as well. The Hawaiian Pie Company officially opened its doors in December 2014, and it’s been a family operation ever since. 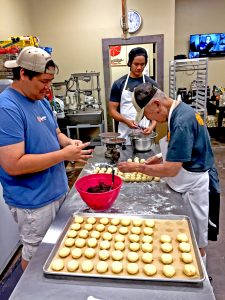 Drew, whose middle name Yoshio is attributed to his great-grandfather, is the operations manager. He works alongside Joel at the ovens, updating old recipes and innovating new flavors. Jan leads the business end, finding new opportunities and helping on the retail front. Matt and Lindsey have full-time jobs in addition to serving as the pie technology specialist and resident social media expert, respectively. Lindsey’s husband, Matty Spencer, is the retail manager.

During the bakery’s opening week, Yasu felt like making bread pudding with the ingredients lying around, just for fun. His family thought he was making it for himself, but he suggested they sell it instead. After being posted on Instagram, the bread pudding quickly sold out before closing time. Yasu continued baking his favorite specials such as manju, shortbread cookies and cornbread, with the help of Joel, Drew, Matt and Dickie. Thus, “Grandpa Yasu’s Specials” was born, a tradition that continues in the bakery today.

In addition to selling their pies from their storefront in Kalihi and shipping frozen pies to the U.S. Mainland and Alaska, the Hawaiian Pie Company sells their pies at more than 50 stores across the state, in large part thanks to the Hawaii Foodservice Alliance. You can even find their pies at the From Hawaii With Love duty-free store in Terminal 2 at the Daniel K. Inouye International Airport.

“I think a lot of people might have a notion about us that we’re a big manufacturing company. But we’re really just a small mom-and-pop shop trying to push out as much product as we can,” said Drew.

In 2020, the COVID-19 pandemic had a detrimental effect on countless mom-and-pop businesses in Hawai‘i. However, the Hawaiian Pie Company stayed afloat thanks to the loyal support of their customers.

“They’re so special to us. Even through COVID-19, they would drive all the way to our shop, and we’d do the process where they would preorder, and we’d drop it to their car. They’ve been supportive of us throughout this journey,” said Jan.

“I would see the same names pop up,” added Drew. “I always thought that was a nice thing to see – that we had people out there who were coming to us even in pandemic times. They were there the entire time. We’re more than thankful for that.”

Sadly, Janet passed away on Nov. 27, 2020, the day after Thanksgiving. A heartbroken Yasu moved back to his family’s home in Kohala a few months later in January 2021. But Yasu wouldn’t let physical distance come between his bond with Joel’s family. Yasu used FaceTime, the iPhone’s video calling application, to stay connected.

“All the times he couldn’t come in, he was in the bakery, because he was on the shelf on Facetime, always just watching over everybody. So, you could always just ask him a question. Even when he moved back to the Big Island, he was still on FaceTime until the day before he passed,” Jan said.

Yasu passed away on March 21, 2021 in Kohala. He was 88 years old. This past July, Yasu and Janet’s family scattered their ashes together at Mähukona Beach in Waimea, a place dear to Yasu’s heart.

Joel, Dickie and Drew reflected on the important lessons their beloved father and grandfather imparted on them.

“No shortcuts,” said Dickie. “For me, it was never to rush. He was always one of those ‘Haste Makes Waste’ kind of guys. And he would always tell me to try. You never know what’ll happen until you try it.”

As the Hawaiian Pie Company approaches its eighth anniversary in December, it doesn’t seem like business is slowing down any time soon. The passion for baking that inspired Great-Grandpa Yoshio to open Holy’s Bakery 90 years ago is the same passion that fueled Grandpa Yasu and Joel through decades of baking – That passion now lives in the hearts of Matt, Lindsey and Drew, as summarized on their website.

“Our purpose as the next generation is to perpetuate our parents,’ grandparents’ and great grandparents’ legacy in hopes that they may never fade. They are who we celebrate every day at the Hawaiian Pie Company, and we hope that our love for them radiates through the products we provide. With every slice, we hope to share our legacy with you.”

Jackie Kojima works as an eighth-grade Japanese teacher at ‘Iolani School and is a freelance writer. A Gosei, she developed a passion for studying Japanese in her middle school years. In her free time she enjoys singing, listening to podcasts and going on walks.