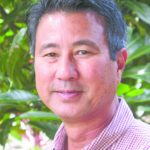 Preserving a Way of Life of Their Native Land

My curiosity was piqued by a video interview by Barbara Kawakami, author of the book “Picture Bride Stories.” It featured my aunty Matsue Shimabukuro who is originally from Wahiawä. She reflected on her shimpai (arranged) marriage with Uncle Takeo Shimabukuro from ‘Aiea. That arrangement was made by their Issei parents who were members of the Aza Yogi Doshi Kai.

How my parents met was a question that lingered in the back of my mind. My dad, Seiei Nakasone, was from Wahiawä and my mom, then Masae Miyasato, was from ‘Aiea, like Aunty Matsue and Uncle Takeo. Was that a coincidence?

I asked my uncle Satoru Nakasone, my dad’s younger brother, if they had a shimpai marriage. He said they did. My dad’s sister, Aunty Sueno Murakami, who is 93-years-old, confirmed it saying, “Baban (my grandmother, Kamei Nakasone) wanted your mom to marry your dad because her family came from the same tokoro (place) in Okinawa and same Yogi club.” She said, “Baban always had an eye on your mom to marry your dad. Back then, you listen to your parents.”

According to the book, “Uchinanchu – History of Okinawans in Hawai‘i,” marriages between residents of a different son (village) in Okinawa were “unthinkable.” Even marriages between residents of two aza (hamlets) within the same son were firmly resisted. It was based on the ground that the groom was taking away a woman, a reproductive element, from the bride’s community. That was the doctrine going back generations that Issei parents were adhering to.

The club gatherings such as the annual shinennkai (New Year’s) dinners and summer picnics were matchmaking opportunities for Issei parents. My grandfather, Jiro Nakasone, along with three Nakasone relatives; Matsukichi Nakasone (Matsue’s father), Yeiso and Yeison Nakasone, were early organizers of Aza Yogi Doshi Kai. And with my mom’s parents, Yamazou and Ushi Miyasato, being Aza Yogi club members, I understand why my parents may not have had a say. But as it turned out, my Baban could not have made a better choice, and they got married in March 1949.

My dad and Aunty Matsue were first born, their younger siblings were not subject to a shimpai marriage based on place of birth. That practice could not survive in a modern Western society.

A shimpai marriage by Issei club members was new to me. It spoke of the old ways. What else is there to learn about these clubs?

The early inhabitants of the Ryukyus (Okinawa archipelago) led a primitive lifestyle centered on fishing, hunting, and gathering. The archipelago provided an abundance of ocean resources and a hospitable subtropical environment. And the results of a study by the Zoological Society of Japan strongly suggest that the ancestral form of the Ryukyu wild boar existed on the archipelago prior to the arrival of prehistoric humans. The first Ryukyuans had the means to prosper.

Like most early societies, Ryukyuan people transitioned to cultivating crops. According to the book, “The Ryukyu Kingdom – Cornerstone of East Asia,” this marked the beginning of the gusuku (castle) period, which is estimated to be sometime in the eleventh or twelfth centuries.

It was during this period when agricultural villages started to form, each within recognized geographical boundaries and usually populated with people related by blood or marriage. A leading class known as aji (lord) emerged in every village during this period. Early on, the aji would build a gusuku (stone enclosure) to mark his political power. When the village became overpopulated, the aji would assign family groups to start a farming community in a new area within the boundary. These communities were self-sustaining and autonomous.

Interviews with Issei further revealed when they were growing up in Okinawa in the late 1800s and early 1900s, generations would live in isolation in these farming communities. There was little contact even between the nearest neighboring aza within the son. Poor roads and the lack of transportation kept the local communities isolated from one another. Long distance travel was rare and if it was necessary, it was likely by foot.

They had long-held local traditions and a culture centered on community. When a family was in need, others were there to help. Their way of life forged a deep kizuna (bond) between them. The clubs in Hawai‘i attempted to preserve that way of life from their native land. The club was like a refuge in a strange land with diverse ethnic groups and languages. It was a social support system that provided them a level of comfort and security.

The families of the three Nakasone Issei relatives, Jiro, Matsukichi and Yeiso, who settled in Wahiawä, have been members of the Wahiawa Okinawa Kyo Yu Kai for three generations.

As a contributing writer for this publication, when interviewing people, I would often be asked, what club do I belong to? (It’s like what we ask in Hawai‘i when meeting another local the first time: “What high school you went?”) I would answer: “My family belongs to the WOKYK.” I personally was not a member then but had become one out of guilt.

The book “Uchinanchu” further states that WOKYK is considered an “all-Okinawan” club as compared to a “locality” club, based on place like the Aza Yogi Doshi Kai. Wahiawa Okinawa Kyo Yu Kai was established in 1937, and back then, Wahiawä was a small pineapple plantation town and considered in the “boonies.” The Okinawan population was relatively small to establish “locality” clubs. At that time, all Okinawan clubs  that were formed in Honolulu lasted only a few years while locality clubs thrived. One might say, Wahiawä, being a small pineapple plantation community and somewhat isolated, WOKYK became their version of a locality club.

Many of the Okinawan clubs were formed in the 1920s and 1930s. They were thriving until the attack on Pearl Harbor. All clubs representing prefectures from mainland Japan as well as Okinawan clubs were shut down. Records were destroyed and financial assets were donated to support the U.S. war effort. There was fear of prosecution against the Japanese community. These actions were to demonstrate that Japanese Americans were loyal to their country.

Wahiawa Okinawa Kyo Yu Kai records were destroyed by club secretary, Tomonori Oshiro, and the club went dormant. It wasn’t until 1950, that the first organizational meeting to revive the club was held. It was hosted by Thomas Shigeru Miyashiro at his home on the grounds of the Wahiawa Botanical Garden, where he was the superintendent.

He had just relocated from Foster Gardens in Honolulu that year. His daughter, Mildred Arakaki, now 85-years-old, recalled as a young girl helping to serve snacks at the meeting. She said, “the district representatives were there.” She recalls that Raymond Inafuku, Jiro Nakasone, Sonkyu Iha, Soei Aniya, Horace Higa, Shigeru Chinen and Shigeru Nakamura all showed up. She said, “Grandpa was instrumental in reviving the club.”

The post-WWII relief effort for war-torn Okinawa accelerated the revival of some clubs. The people of Okinawa were in dire need and the motivation to send supplies was at a fever pitch. The clubs provided an established network to mobilize people on short notice.

A club was born out of the relief effort. Rev. Masao Yamada of the Holy Cross Church in Hilo recognized the effort by a group of volunteers who mobilized to collect supplies that were stored at the church. He recommended that they continue to work as a group for betterment of the community. Thus, Hui Okinawa (formerly Hui Hanalike) of Hawai‘i island was established in November 1946.

As a Sansei, I’ve heard the concern of attracting the Yonsei. Getting the younger generation interested was also a concern for the Nisei.

As quoted in the book, Sonsei Nakamura of Haebaru Sonjinkai explains: “We Nisei have had contact and communication with the Issei so we were inclined to join the club. With the Sansei, it is another story. The younger ones are drifting further and further away from the organization; however, we are trying very hard to get them interested in the club.”

One might surmise that this will be an ongoing concern with each new generation. The following points are in general terms and based on oral history published in “Uchinanchu,” feedback from club members, personal observations and data from the 2019 Okinawa Festival.

Member talent shows were a big part of the entertainment at the annual shinennkai parties. As a young boy, I fondly recall the Nakasone trio with my mom on harmonica, Uncle Yeiko Nakasone on guitar and my dad singing. They played “You are My Sunshine” to an appreciative full house at Dot’s banquet room in Wahiawä.

My dad loved to sing, and he would go on stage solo and sing songs acapella. His favorite was the iconic Irish song, “Oh Danny Boy.” I didn’t know it was a popular song of the time – I thought he was singing about me. I felt embarrassed and rushed out of the banquet room and peeked through the door to watch him sing.

If I could relive that moment today, I would join him in a father and son duet.