For as long as I can remember, the most common and repeated question I’ve been asked is: “What are you?” Referring of course to my ethnic background, a frequent and almost expected question growing up in our islands of Hawai‘i. And for just as long as the question was asked, I proudly answered with what I had overheard my parents say again and again, “I’m hapa!” With a full Portuguese father and full Japanese mother, there couldn’t be a truer statement.

As I grew up to raise my own children, I celebrated and passed on the all the things I love and admire from my two cultures, combined with the traits of uniqueness that only comes from growing up in Hawai‘i. As it’s known, we are so spoiled here in this place we call home, where ethnic backgrounds are scarcely the source of any negativity, but rather encouraged in every form and collaboration. I never could have imagined how much being “hapa” or “mixed plate” would impact my future.

At the end of September 2021, we welcomed our second beautiful, mixed-plate baby girl. Everything was perfect until just shy of three weeks, we felt propelled to take her to the emergency room when she ran a fever and seemed uncommonly ill. Despite the doctors thinking it was not anything to be concerned about, we encouraged the staff members to take a blood test. The result was shocking but proved our parental gut instincts: our daughter’s white blood cell count was extremely elevated. We then sat in disbelief as a doctor relayed a sentence we couldn’t have imagined in our darkest nightmares: “your baby has cancer.” Without enough time to fully comprehend what was happening to our newborn, we were medevaced from Kaua‘i to Kapi‘olani Medical Center for Women and Children.

After three days of testing that yielded no explanation for the elevated levels, an oncologist joined our team. It was discovered then, that our daughter had a rare and aggressive form of leukemia, and the only hope for her survival was an intensive four rounds of chemotherapy, followed by a bone marrow transplant. The intensified problem with this is that finding a match for my baby of mixed race was an even more impossible task to find a donor. Despite gathering 3,000-plus additional donors to the Be The Match registry, with people of Hawai‘i lining up to be the savior of our daughter’s life, we were unable to find a match. Luckily, science and medicine create miracles every day, and we were able to proceed with a “half match” transplant, using myself as the donor. Ten years ago, this type of transplant was little more than an idea in a science fiction novel.

In mid January, we packed up everything we could and relocated to Seattle where Seeley was scheduled to have two more rounds of chemotherapy — after her aggressive two rounds at Kapi‘olani — and her transplant of my bone marrow at Seattle Children’s Hospital. There we were, jumping head first into a world that had so many unknown factors, unsure of when we would be able to return home. One thing we knew for sure was that this next phase would be extremely difficult; the transplant was unlike any battle we had fought up to that point. We spent one beautiful week as the family of four we are meant to be with our older daughter Ainsley Jude before flying her back home to the care of my family in Kaua‘i and checking into the hospital.

In the beginning, being in a mainland hospital was difficult. The nurses in Hawai‘i have aloha in their veins, so adapting to the culture took some time. Of course all that changed when my mom sent her first omiyage box, which the staff gathered in awe and curiosity as to what everything was. Everything from arare, nori, Goteborg sausage (Kaua‘i as why), tea and lychee candy to paper fans and hashi. We offered to let them try every bit of it and so started a different and beautiful relationship with our Seattle Children’s Hospital family, and we began to feel the aloha in them too. For 170 days, every week without fail, my mom sent box after box of comfort from home. Then it wasn’t just my mom sending omiyage, we were blessed with package after package from friends and people we had yet to meet in real life! From a crazy amount of boxes of macadamia nut chocolates from our sweet Hilo friend Hi‘ilani Kuali‘i to share with the staff to celebrate Seely’s transplant, to boxes full of goodies from Honolulu Crack Seed, coolers full of lau lau, fresh fried akule and rice from the Durant family who had moved from the islands to Washington, and so much more. We know the outpouring of love, aloha and support was what helped continue to fuel our fighting spirits.

For months our tiny girl continued to defy odds, despite being the youngest to be diagnosed in our home state, and a rarity in a big hospital like Seattle Children’s Hospital. Seeley proved to be a resilient fighter who won the hearts of everyone she encountered. What her little body went through, and continues to go through just for a chance at life, is a miracle. Not only was she fighting for remission and a successful transplant, but also against the complications that came with the transplant such as the immense toll it took on her liver and kidneys and trauma from sepsis.

After nine long months, we were able to return to Honolulu and into the care of our Kapi‘olani team as an outpatient. Although Seeley won’t be considered in complete remission until she is five years old, and we will need to remain on the island of O‘ahu until next March when she’s a year post transplant, being back in our islands, reunited with Ainsley and our families has offered a type of healing no medicine could accomplish. We know that we couldn’t have fought in the war against cancer without the love and support of our family, friends and the community. They truly did all they could to ensure that we never felt alone, and we plan on doing all that we can to make every family and child fighting similar battles feel that same love and support. On Oct. 23, at St. Louis Alumni Clubhouse, we will be hosting a cancer awareness and craft fair, with proceeds donated to HUGS and Hawai‘i Children’s Cancer Foundation, while continuing to bring support and registrations to Be the Match Hawai‘i and Blood Bank of Hawai‘i. Our hope is that we can help others easily find the support so readily given to us, to fight and win the war against cancer. Together we can ensure no one fights alone. 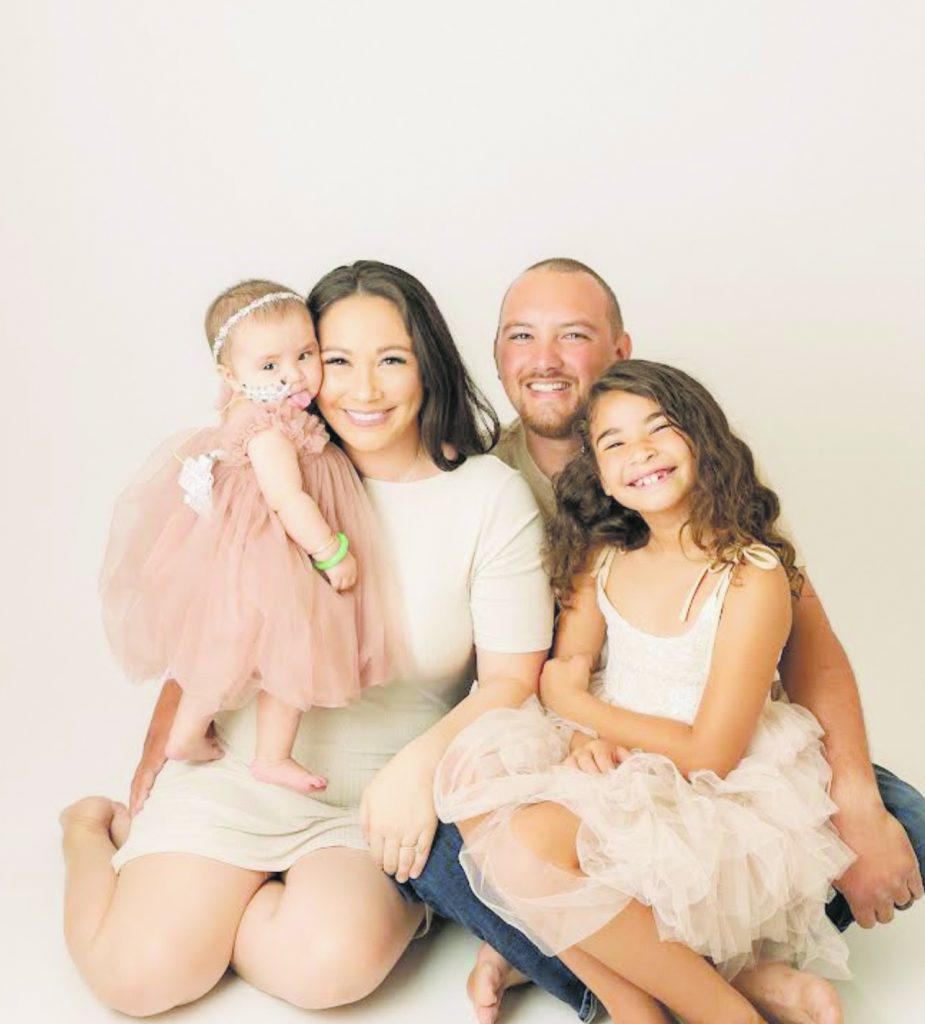 Hayley Borges, born and raised on Kaua‘i, has been a flight attendant for Hawaiian Airlines for 16 years. Her middle name is Kikuno, named after her “beautiful Nana,” which in Japanese means chrysanthemum flower and the reason why she gave both her daughters a middle name after a flower. She is grateful for the community’s support during the most trying time of her and her family’s lives and hopes to give back and pay it forward at the cancer awareness and craft fair on Oct. 23 from 10 a.m. to 4 p.m.