Cong Rong has long dreamed of becoming a lawyer, but her mother is absolutely determined to see her daughter study finance abroad. Hoping that her daughter will successfully settle down somewhere overseas, Rong’s mother won’t take “no” for an answer. However, after successfully convincing her mother that she has set off for distant lands, Rong secretly returns home to begin work as a legal intern. Her first client and case ends up being her childhood friend, Wen Shao Qing. Now a surgeon, Shao Qing is also her landlord and next-door neighbor. Tied together by the ever-tightening strings of fate, Rong and Shao Qing find themselves drawing closer, despite their best efforts.

Today’s Webtoon tells the story of On Ma-eum, a former judo athlete, who struggles to adapt to her new job as webtoon editor after retiring as an athlete due to an injury. 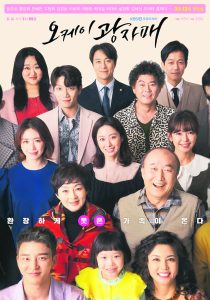 “Revolutionary Sisters,” Wednesday and Thursday at 10 p.m.; repeats Thursday and Friday at 1 p.m.

The series opens with the murder of a mother that is committed during parent’s divorce proceedings and all members of the Lee family and the extended family are suspected of murder.

Life, death and second chances take center stage in this story about three people whose intertwined destinies travel through space and time with haunting results. It’s the 1980s and Detective Cha Hyung Bin has devoted his life to criminal justice, and his heart to Ha Eun, a bookshop owner suffering from heart disease who keeps her illness a secret. But Cha Hyung Bin isn’t the only one pining after Ha Eun: serial killer Gong Ji Chul has also fallen in love with her. Their lives collide with tragic results, but 30 years later, they’re reincarnated and fate brings them together again. The more time passes, the more their new lives become tangled in the devastating web of history. Will they manage to escape the past, or be forced to come face to face with it?

Set in the Koguryo period, Moo Seol, the daughter of King Young Ryu, falls in love with Yeon Choong, the child Yeon Gaesomun had with a concubine. But Moo Young debates whether she should have her revenge, as Yeon Gaesomun is the man who killed her father.

Weather caster, Pyo Na-ri and news anchor, Lee Hwa-shin, are long-time colleagues at SBC broadcasting station. Na-ri has had a crush on Hwa-shin three years ago but things change when she meets the perfect man Go Jung-won, a close friend of Hwa-shin.

Meanwhile, Sung-sook and Ja-young, who are rivals in both love and career, get entangled with Kim Rak, a restaurant owner and landlord of the building where Na-ri lives.

“Unmasked Family,” Monday and Tuesday at 10 p.m.; repeats Tuesday and Wednesday at 1 p.m.

When Yeo-Won Kang was a university student, she dreamed of becoming a reporter. An expected pregnancy caused her to change that dream. Her life takes an expected turn, after living as a housewife and taking care of her family, in-laws and managing the family’s finances, when her husband gets into an accident and everything changes.

A day before the Korean War breaks out in 1950, a man is murdered. This event triggers repercussions in three families, as four young people struggle with love and forgiveness. Eun Hee Kim’s father was falsely accused of the murder, and dies as a result. Since then, Kim has been shunned by her fellow villagers. Sung Jae Im has always been in love with Kim, but the past threatens to tear them apart.

Chipper and optimistic orphan Sae Byeok Jang changes her life upon getting a corneal transplant from Na Yeong. To thank her late donor’s family, Sae Byeok Jang visits them, but finds that Na Yeong’s parents did not know their daughter died. She soon grows close to the dead girl’s parents.

The series revolves around an impersonator who calls herself “Yoo Gina.” The real Ji-na is a pop diva who one day meets the impersonator, which then leads to their lives becoming intertwined. The two find ways to be there for each other as Ji-na lives a glamorous life but harbors a personal tragedy while Yoo Gina works at a nightclub to make a living but wants to become a real singer herself one day.

A variety game show that features a series of games and missions that select team members must complete to win the race. As they fight to win prizes, and at the same time avoid penalties, the members show their chemistry with each other and the celebrity guests that occasionally join in on the fun.

The tale of a former teacher and student, Eun Soo Oh and Bit Na Kim, who meet again years later after they married brothers, Soo Ho Yoon and Soo Hyuan Yoon. They even become stepsisters after the remarriage of their parents.

A variety show featuring trot music — a genre of Korean popular music known for its use of repetitive rhythm and vocal inflections — will be front and center in this special program. Fantastic performances from trot legends along with the hottest up and coming new stars will join in on this music ranking TV show.

An upbeat family-oriented TV miniseries with a mishmash of different generations and attitudes towards relationships. The difficulties that arise between mother and daughter mostly due to the men they are having a relationship with becomes the central plot that illustrates the challenges that single moms and divorcees face in today’s society. Their lives and the lives of the people they are connected to are depicted in a way that viewers can relate to through a fuzzy warm feeling called love.