Ever since I had childrens, I been trying really hard for get dem as many Okinawan-themed children’s picture books written in English that I could find. My first set of reviews of da books I tracked down came out in da Jan. 3, 2014, issue of The Hawai‘i Herald. My second set of reviews came out Jan. 2, 2015. Aftah monku-ing how hard it is for find Okinawan-themed children’s picture books I said to myself, Hey I’m one writer, I should just write one. And so in 2019 I did! Of course I not going review my own, but planny more books came out too since I wrote my last batch of reviews. I also came across couple older ones I wen miss. When possible I tried for put da website wea you can get each book, but for da rest of ‘em you just might have to try your luck on top da Japan Amazon site. 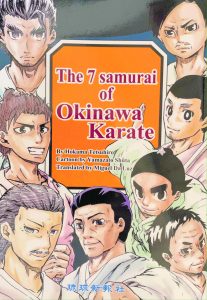 Dis one tells da history of karate but in manga form. Technically it’s not one children’s picture book, but I tink kids and even grown ups will probably enjoy reading dis eju-ma-cational comic. Though seems like da book would cover only seven important historical karate figures, it actually goes over eight. How well you know da stories of Kanga Sakugawa, Chöken Makabe, Sökon Matsumura, Kösaku Matsumora, Gichin Funakoshi, Chöki Motobu, and Kanryö Higaonna and Chöjun Miyagi? If you nevah heard of these buggahs den you should probably check dis book out. 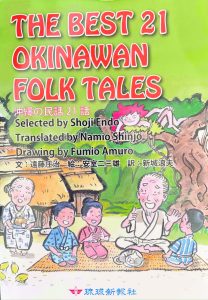 Dis da same writer/illustrator team that brought us “Folktales of Okinawa” that I reviewed in my last installment. I wuz worried dis wuz just going be 21 of da same stories from that book but just repackaged. While couple of ‘em stay da same (with different translations), da oddah ones is new. Da English translations in dis book stay little bit stilted dis time around. As with their previous book, each story get one illustration, but dis time da pictures stay in color! Da “Ryukyu Shimpo” had been running these folk tales as one regular series and when wuz pau dey asked da readers for vote for their favorites. Da top 21 made ‘em into dis collection. And why 21 stories? So these stories can be perpetuated into da 21st century! 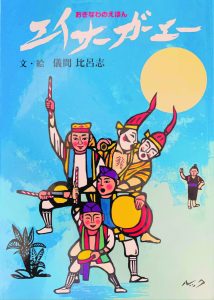 Hiroshi Gima stay one of Okinawa’s most famous and revered woodblock print artists. Born in 1923, lotta his print work dealt with da Okinawan landscape and da theme of war. Gima passed away in 2017, but during his prolific career he illustrated one number of children’s picture books winning multiple awards along da way. For dis book da title no stay translated, but luckily da story is. Da ting teaches why we get Obon and da significance of da eisä festival. 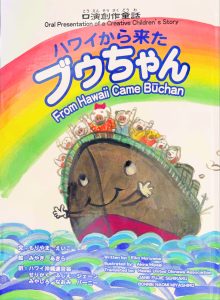 Aftah WWII had lotta devastation in Okinawa. Okinawa used to have ova 100,000 pigs, but aftah da war had less than 800. In one effort for restart da pig farming industry, Hawai‘i-Okinawans raised money for send 550 pigs for breeding purposes to Okinawa. Das da tale das told hea and it’s told from da POV of da pigs! Dis one important book for have for your keiki’s collection cuz dis da kine history dey should know. I just wish da supplemental informations in da back of da book wuz translated into English too so we would be able for learn even more. Available at shophuoa.com. 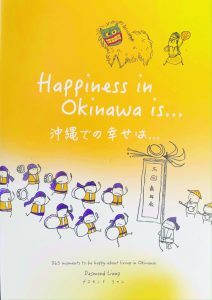 “Happiness in Okinawa is…”
Written and Illustrated by Desmond Liang
Oki Social, 2019
🦉🦉🦉🦉 ½

So cuuuute dis book! Dis book stay meant for adults, but I tink kids going like ‘em too. Liang’s drawings stay done in one stick figure-like style, but dey manage for convey so much movement and emotion. Liang get 365 illustrations with captions on tings in Okinawa that make him happy like “a traditional red top roof Okinawan home,” “fresh sea grapes” and “Sunabe seawall.” I just wish some of da general ones wuz more specific. But those wuz few and far between. Most of these little gems of observation should bring one smile to your face. Garanz ballbaranz. Available at okisocial.com 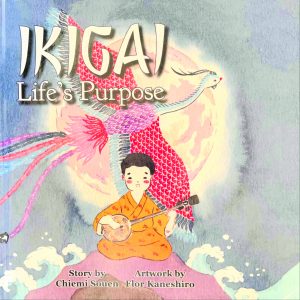 When my daughter wuz in kindergarten, da teacher Ms. Satsuma made her cry cuz she asked da class for give one presentation on what dey like be when dey grow up. When my daughter came home she wuz sobbing, “What if I don’t know what I wanna be?” Da concept of finding one’s ikigai can be one scary ting for one kid, but dis story reassures childrens that it’s okay if you don’t know. And it’s okay if you like try out different tings, cuz how else you going find out what brings you joy? Written by Chiemi Souen, she’s mo’ bettah known to us as Jodie Ching, our beloved former Hawai‘i Herald editor-in-chief. Da story stay based on one of her sanshin teachers, Choichi Terukina and his journey for sing and play sanshin music beyond Okinawa’s shores. Dis heartfelt story stay accompanied by gorgeous watercolor art by Argentinian Uchinänchu Flor Kaneshiro. What a treasure dis book truly stay. Go get ‘em at shophuoa.com. 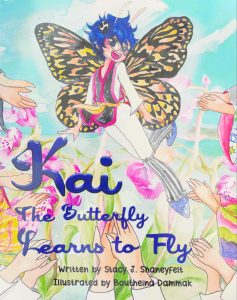 Dis one original myth about how one girl with butterfly wings learns how for fly. Da setting stay in Okinawa and some of da characters’ clothes-es in da story look kinda Okinawan-ee, oh and one shisa appears in da background for one of da pages, but if wuzn’t for those tings, da story could take place anywhere. Da story stay told in rhyme, but some really big words pop out every now an’den so I not sure what da target age is. And da art looks like stay done by somebody still learning how for draw in da manga style. Bumbye dey learn. Available on top Amazon.com. 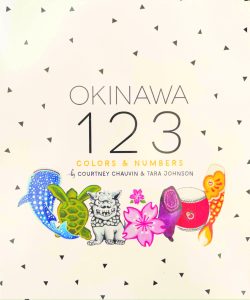 Dis self-published board book stay nicely designed with wonderful painted artwork. Da book’s bio says da creators wuz U.S. military neighbors in Okinawa who “both fell in love with Okinawa and all the beauty it holds.” With Okinawa as da theme dis board book teaches colors and numbers to infants and toddlers. For examples it tells stuff like “2 white shisas guarding at the door” and “4 purple benimo to be made into a pie.” I only wish some of da items selected wuz more specifically Okinawan. Like turtles and sea shells, cuz get those anyplace. But if you want something Okinawan themed for da three and younger age group, dis might be da only and therefore da bestest book you going find. Available at oki123.com. 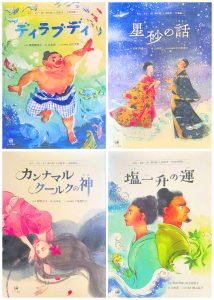 Port Language Revitalization’s Ryükyü Picture Books Project: (left to right, from top)
“Dirabudi the Fisherman” (Yonaguni)
“A Tale of the Star-Shaped Sand” (Taketomi)
“The Tale of the Beautiful Girl, Kannamaru Kuuruku” (Tarama)
“The True Value of a Sho of Salt” (Okinoerabu)
Written, illustrated and translated by various
Hituzi Shobo, 2021-2022
🦉🦉🦉🦉🦉

I said I wuz reviewing Okinawan children’s picture books, and technically these four books not “Okinawan” like from da island of Okinawa kine, but dey all stay Ryukyuan so I including ‘em. Da Port Language Revitalization organization founded in 2014 does planny projects, one of which stay dis Ryükyü picture books project where dey did one crowdfunding campaign couple few years ago for get these books published. Den da pandemic wen hit and da books got delayed. I finally got mines in da mail last month and wuz worth da wait! I asked da project leader Masahiro Yamada what his organization name means. He explains: “It’s a port called ‘Language Revitalization.’ I wanted to make this project like a port; people and resources gather, they share their experiences and some of them may become the crew of a boat that sails to the same destination. Indeed, people from different language communities, linguists, designers, artists are working together in one or more sub-projects now.” Masahiro-san says da goal for dis particular project is “to make it ‘normal’ for the language communities to have picture books written in their languages. Right now there are very few to none written in their languages.” These books stay so well done.

Outta da four books “Dirabudi the Fisherman” stay da only creative story. It’s written by Etsuko Yonaha who based ‘em on one traditional musical drama. Da oddahs is folk tales that wuz passed down on top each island from generation to generation. For each book da text stay written in Japanese, English and da native language of that island. “Dirabudi the Fisherman” stay told in Dunan munui, da native language of Yonaguni. “A Tale of Star-Shaped Sand” stay told in Teedon muni, da language of Taketomi. “The Tale of the Beautiful Girl, Kannamaru Kuuruku” stay told in Tarama futsu, da Tarama language. And “The True Value of a Sho of Salt” stay told in Shima muni, da island language of Okinoerabu. Akiko Yokoyama da researcher in charge of da Okinoerabu book tells me how dis whole project got started, “The leader of the project is Masahiro Yamada. Masa and I were working on creating picture books in the Okinoerabu language. Then, he met with Fumi Yamamoto who is an illustrator, interested in creating picture books of regional folktales in Ryükyü. Masa and Fumi researched and chose four stories in Ryükyü and Masa invited Kayoko Shimoji and Natsuko Nakagawa, both are linguists, to create four books because each island has a different language.” Akiko-san says one native speaker from one island no can understand one native speaker from one noddah island. Das how different da languages are. I asked if it’s supa-different from Uchinäguchi, da language of Okinawa, and she said “Okinoerabu language is slightly similar to Uchinäguchi because both belong to Northern Ryükyü, but still I think their mutual intelligibility is low. And the other three are very different.” Right now all these Ryükyüan languages stay endangered but still get hope. Akiko shares: “Based on our investigation, there are ‘potential speakers’ who don’t speak the regional language but can understand it in middle age. We wanted to create the opportunity which these middle age [parents] use the regional language and we thought picture books which they can read it for their children is the best tool to achieve it.” Aurite! Sounds like one plan. 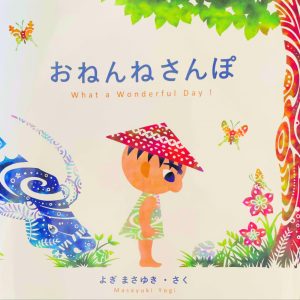 Lotta Okinawan artists might incorporate some Okinawan bingata elements into their art, but I love Yogi’s take where he paints his birds, monkeys, elephants, water buffalos and whales in one unique style that I can only describe as COSMIC BINGATA wea it looks like Okinawan stencil resist dyeing, but yet looks super otherworldly too. Yogi graduated from da Okinawa Prefectural Arts University and he says that Okinawa get one “strong life force” so he began drawing for “represent this feeling of the world.” Da basic premise of dis story is one boy goes into da natural world and adventure ensues. But da trippy ting is da story nomo words. So I love having my childrens look at da pictures an’den having dem tell da story to me. And da best part is whenevah we “read” da book, da story comes out different every time!