Shea Sakahara is your typical 17-year-old rising high school senior. When this Kailua teen isn’t busy with SAT prep, classes at Punahou School, or his part-time job in the After School Care program, he enjoys hanging out with friends at the beach, hiking and photography.

It’s an active and busy lifestyle that one doctor doubted would ever be possible.

When Shea was just 18 months old, his parents, Tim and Karisse Sakahara, visited a neurologist in Sacramento, Calif., in search of a diagnosis for their son. The neurologist determined that Shea had a relatively minor case of cerebral palsy that affects the right side of his body. According to The Centers for Disease Control and Prevention, cerebral palsy is a condition caused by abnormal brain development that affects a person’s ability to control their muscles. Although the severity of the symptoms varies in each case, CP generally has an impact on one’s posture, balance and ability to move.

Although the neurologist reassured Tim and Karisse that their son would probably grow up to be fully functional in life, he believed that Shea would never play baseball. The news left Tim, a former journalist and lifelong baseball fan, speechless. Shea was even named after William A. Shea Municipal Stadium in Queens, the former home park of the New York Mets. When Tim broke out of his shocked daze, he confronted the doctor.

“For that doctor to say, ‘He’ll never play baseball,’ in the way he broke the news to me was devastating. I remember just stopping him mid-sentence and saying, ‘You’re wrong. My son is a year and a half. I don’t wanna hear what he can’t do. No one is gonna tell him what he can’t do.”

Tim and Karisse raised Shea to never be ashamed about his condition. Shea worked tirelessly with an occupational and physical therapist, along with the help from his family and friends to develop his motor skills. Abilities that most of us take for granted, such as holding a lunch tray level, buttoning a shirt or pair of pants or tying shoelaces were celebrated achievements in the Sakahara household.

In fact, the Sakahara’s still keep a picture from a momentous achievement on their fridge. It is a picture of Shea’s first time opening a milk carton by himself, a skill that took him months to master. Dressed in a yellow hibiscus aloha shirt, a preschool-aged Shea beams up at the camera with fists clenched in a proud pose, his bright eyes glistening with joy.

Although Shea had to wear braces on both legs to support his coordination in preschool, he was able to switch to using only one brace during kindergarten. Unfortunately, his intense therapy schedule meant that he sometimes had to attend sessions during the school day. Karisse recalls that as young as he was, Shea made it known to his parents that he didn’t want to be pulled out of class.

“Shea is always determined. He didn’t want to be treated differently,” said Karisse. “I remember Shea drafting an argumentative speech in second grade to tell Dr. Pellett at Shriners why he did not need leg braces anymore. It worked; the doctor listened!”

Dr. Pellett explained to Shea that if he noticed any setbacks or didn’t see any improvements, Shea would need to go back on leg braces. Shea never wore leg braces again.

Shea started expressing an interest in playing baseball when he was six or seven years old, much to his father’s delight. In order to play to the best of his ability, Shea learned how to throw and catch with his left hand, a style he accredits to former professional Major League Baseball pitcher Jim Abbott. Despite being born without a right hand, Abbott successfully pitched for teams such as the California Angels and the New York Yankees. Shea continued to develop a passion for baseball, and he now plays on a men’s club wooden bat league with his father.

When Shea learned of what the neurologist had told his parents, it became one of his strongest motivations to work hard to defy the boundaries of cerebral palsy.

“It’s a motivator to me to prove that I can do anything that everyone else does – not only for myself, but to show other people who have a similar situation to me: There are challenges in life that may shape you into the person you are, but it doesn’t define who you are.”

Baseball isn’t Shea’s only passion; he developed a heart for community service before he was even a teen.

Shea attended Kailua Elementary School from when he was three years old in the Head Start program until the end of his fifth grade year. When Shea was a second grader, his mother Karisse became a teacher there. Shea saw many of the teachers as his “aunties” and he thrived under the school’s nurturing environment.

“[Kailua Elementary School] cultivated a lifelong love of learning and a pursuit of wanting to learn more,” Shea said.

As he got older, Shea started noticing that many of his peers didn’t have basic school supplies, such as composition books, pencils, erasers and markers, due to their families’ circumstances. Fortunately, many of the students did not have to go without thanks to the generosity of their teachers – teachers like Karisse. Shea often tagged along with his mother on her annual trips to Fisher Hawaii and watched her calculate her purchase order down to the penny. Inevitably, she would want or need supplies outside of her budget, ultimately deciding to just cover the cost on her own.

“Every teacher that I knew and continue to meet spent money out of their own pocket so that their students could receive an education they could be proud of,” Shea said.

When Shea started his sixth grade year at Punahou School in 2016, he could not ignore the vast difference in the availability of resources. He thought back to his friends and classmates at Kailua Elementary and knew he wanted to give back to the school that had provided him such a positive start. Shea founded his project, Strong Start 4 Kids, with the aim of giving students the tools and supplies they need to learn and grow in the classroom.

Shea began speaking with Punahou’s Luke Center for Public Service, the school’s hub for organizing community service efforts. He explained his initiative to the sixth grade teachers and deans and started spreading the word throughout his grade. The teachers allowed Shea to have drop off points in their classrooms and space in the courtyards where students could easily bring their supply donations, helping to expedite the process. He also provided a list of the most needed supplies, so students knew what kinds of items to donate. In May 2017, with the help of a few friends, Shea kicked off his one-week supply drive. He had no idea of what to expect or how his new school would respond.

Shea was blown away when more than a thousand supplies were donated over the course of one week. Shea’s family helped provide necessary labor and legwork. Together, they loaded the supplies in the back of the car, individually tallied it and created an inventory list. Shea presented the supplies to the Kailua Elementary teachers on their cafeteria stage, and confidently gave a speech in front of a tear-filled audience that included his parents. Karisse continued to teach first grade at Kailua Elementary for several years before joining Shea at Punahou as a third grade teacher.

At the end of his sixth-grade year, Shea was one of two recipients in the whole grade to receive the William Knowlton Award. Presented in memory of Bill Knowlton, a former supervisor at Punahou, the award is given to students who exemplify “integrity, kindness, caring, a sense of humor and commitment.” Karisse recalls that the award recipient had to be someone who was a good friend to all – someone who made an effort to include everyone. Tim and Karisse were taken aback at their son’s drive and resilience.

“Shea was a pure joy. Always was and still is such a remarkable kid. I don’t know how I got so lucky. He’s a phenomenal kid. I’m blessed,” Tim said, holding back tears.

After his great success with the supply drive in 2017, Shea did not slow down. In fact, he was motivated to ramp up his efforts and partner with more schools in need. In his seventh grade year, Shea partnered with Maunawili Elementary School in Kailua. Strong Start 4 Kids donated more than 1,700 supplies in August 2018. In December of the same year, Strong Start 4 Kids collected more than 500 donations to send to multiple schools on Boracay island in the Philippines. The donations helped 210 students from kindergarten to eighth grade. 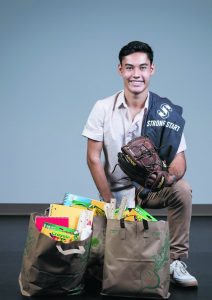 In 2020, the COVID-19 pandemic sent schools worldwide into a panic including the state of Hawai‘i. After months of online learning, students and teachers were itching to return to the classroom. Schools were in desperate need of Personal Protective Equipment in order to keep their communities safe. Punahou reached out to Shea, letting him know that they had hundreds of desk shields that were no longer going to be used in classrooms. Instead of letting this precious resource go to waste, Shea connected with several schools he partnered with in the past and found new homes for the shields in February 2021. In the same month, Strong Start 4 Kids donated more than 1,300 supplies to Pu’uhale Elementary School in Kalihi.

Shea most recently partnered with Ala Wai Elementary School in Strong Start 4 Kids’ biggest donation yet. More than 2,100 supplies were collected during the holidays and donated to the school in March of this year.

As Shea prepares to enter his senior year, he and his mentors have started to think about the future and legacy of Strong Start 4 Kids. Although Shea doesn’t know exactly what that will look like, he is committed to continuing the work of Strong Start 4 Kids’ mission beyond graduation day.

Shea is grateful for the many teachers, doctors and friends who have been there for him, and helped shape the person he is today. Most of all, he can’t thank his parents enough for their love and support.

“My parents, Tim and Karisse Sakahara, really provided me with an abundance of opportunity, and have really been my biggest supporters since day one.”

However, Shea reflected that it is not only people who impact our lives in significant ways.

“If I don’t say anything, on the surface, most people won’t notice it. However, [cerebral palsy] does have a real, tangible impact on my life. CP has truly shaped the person I am today, and I wouldn’t be the same person had I not had CP. But it doesn’t define what I can and can’t do.”

Shea’s unique perspective and experiences have led him to his life motto, which can be an inspiration to us all.

To learn more about Strong Start 4 Kids and to get involved, visit strongstart4kids.wixsite.com/strong.

Jackie Kojima works as an eighth-grade Japanese teacher at ‘Iolani School and is a freelance writer. A Gosei, she developed a passion for studying Japanese in her middle school years. In her free time she enjoys singing, listening to podcasts and going on walks.