For the students at ‘Aiea High School, mental health was the issue that stuck out to them. In their video for the 100th Infantry Battalion 2022 Challenge presentations, one of the students from ‘Aiea High explained that: “Due to the pandemic and distance learning, teenagers are dealing with mental health issues and problems with social and emotional learning. We hope the stories of the 100th Battalion will motivate teenagers to never give up, to push through adversity, and always persevere.”

To combat this issue with mental health, the students came up with a five-phase plan to share the values of the 100th Infantry Battalion. The first phase involves making sure other students know about the battalion and their values. In the presentation, the student said: “We want to educate the students here about the problems the 100th Battalion faced, what they overcame, and how they really overcame it.” Phase two will display the values from the 100th Infantry Battalion and encourage other students to follow by giving rewards or certificates every quarter.

In the next step, the students who participated in the challenge would put up messages around the campus “to encourage and inspire students,” as they said in their presentation. These quotes would include ones like “Be the change you want to see in the world” and “Hardship is strengthening you for the future.” This phase was influenced by the 100th Battalion’s use of the phrase “Go for Broke” to encourage themselves. After that, phase four will be used to focus on issues with mental health. In the students’ presentation, one of them said, “For phase four, in order to specifically target the issue at hand, we will also pass out handouts or put up posters on mental health and social-emotional learning tips. We would have two versions: one to help yourself, and how to help someone else you may know.”

The final phase to complete the peer-education program focuses on teaching students and staff members about where to get help if needed. “For our final suggested phase,” continued the student. “we would want to put up posters and handouts on where to get help and who to contact. It is very important that students, teachers, and staff alike all know who to go to if they really need help.”

The 37th annual Obon hoyo (memorial service) opened with remarks from Christine Kubota, mistress of ceremonies and past UJSH president. Kubota began by thanking the crew of JS Izumo and JS Takanami of the Japan Maritime Self-Defence Force for cleaning up the area by the yosebaka in time for the ceremony.

“Obon hoyo, or yosebaka imin, as we used to call it, is one of the reasons I joined UJSH,” Kubota said, “Thanks to the [Kanyaku Imin Centennial Committee], we are now able to pray for the gannenmono and kanyaku, who were the source of our Japanese American heritage.”

Bishop Kosen Ishikawa of Jodo Mission of Hawaii officiated the ceremony honoring the 141 gannenmono (first pioneers to migrate from Japan) who sailed to the islands in 1868, during the first year of Emperor Meiji’s reign. After Emperor Meiji and King David Kaläkaua signed a treaty in 1885, tens of thousands of contract workers followed the gannenmono to work in the sugar plantation fields, working 10-12 hours a day, six days a week, earning about $10-$15 a month. Many hoped to save money to send back to Japan, but were unable to return home. Those that stayed on the islands without descendants were buried in graves, decaying, toppled and unattended for decades until the Oahu Konyaku Imin Centennial Committee decided that something must be done.

In 1985, a hundred years after the first contract workers arrived in Hawai‘i, 289 neglected graves were placed in a 12-foot yosebaka at Makiki Cemetery to be cared for and remembered, together. The 12-foot tall granite memorial was designed and created in Okayama, Japan, delivered to O‘ahu and placed over the yosebaka. The memorial unveiled on February 8, 1986, and every year since, services were held in February to remember Hawai‘i’s first Japanese pioneers until the UJSH began organizing the Obon service to coincide with summer Obon season.

“It is the pioneering spirit and remarkable sacrifice which gave others the momentum to follow and come live in Hawai‘i to create a foundation for their children, grandchildren and great grandchildren and the generation after,” said Consul General Aoki, who noted the great cultural and language differences gannenmono must have faced.

The service also honored officers from the Japanese Imperial Navy, who died overseas between 1876 to 1899. The sailors traveled the islands to protect the interests of Japanese citizens in Hawai‘i and to promote and strengthen friendship and understanding between Japan and Hawai‘i.

Bishop Ishikawa began the ceremony with a mukaebi, or welcoming fire, by lighting a candle to guide the ancestral spirits to the living world.

“With the tradition of offering Obon, we offer cucumber and eggplant,” Bishop Ishikawa explained. “Cucumber, we regard as a horse. Riding up on the horse, the ancestor can convert quickly in this world. On the other hand, on the way back to the other world, they ride on the eggplant [symbolized] as a cow, so they can go slowly back … and carry many things to bring back to the pure land.”

Each guest offered incense as the bishops chanted a Buddhist sutra to welcome the ancestral pioneers.\

“I have always liked the word ‘pioneer’ better than ‘immigrant,’” said UJSH president Kanzo Nara, closing the ceremony. “Immigrant sounds like a status you would put on your visa application; whereas, pioneer is a person who is an adventurer.”

Nara noted that the July 16 Obon hoyo coincided with the 53rd anniversary of the Apollo 11 moon launch. By today’s standards, he said, sailing across the ocean may not seem as grand as flying into space, but in the late 1800s, the 14-day voyage was equivalent to landing on the moon.“For a young man or woman from Yamaguchi, Hiroshima, or Kumamoto in the Meiji era to embark on such a journey,” said Nara, “It must have taken true pioneer spirit.”

Visiting the yosebaka is open to the public at Makiki Cemetery, located at 1630 Pensacola St. between Pensacola St. and Wilder Ave. 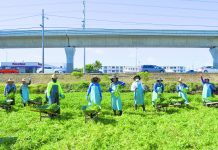