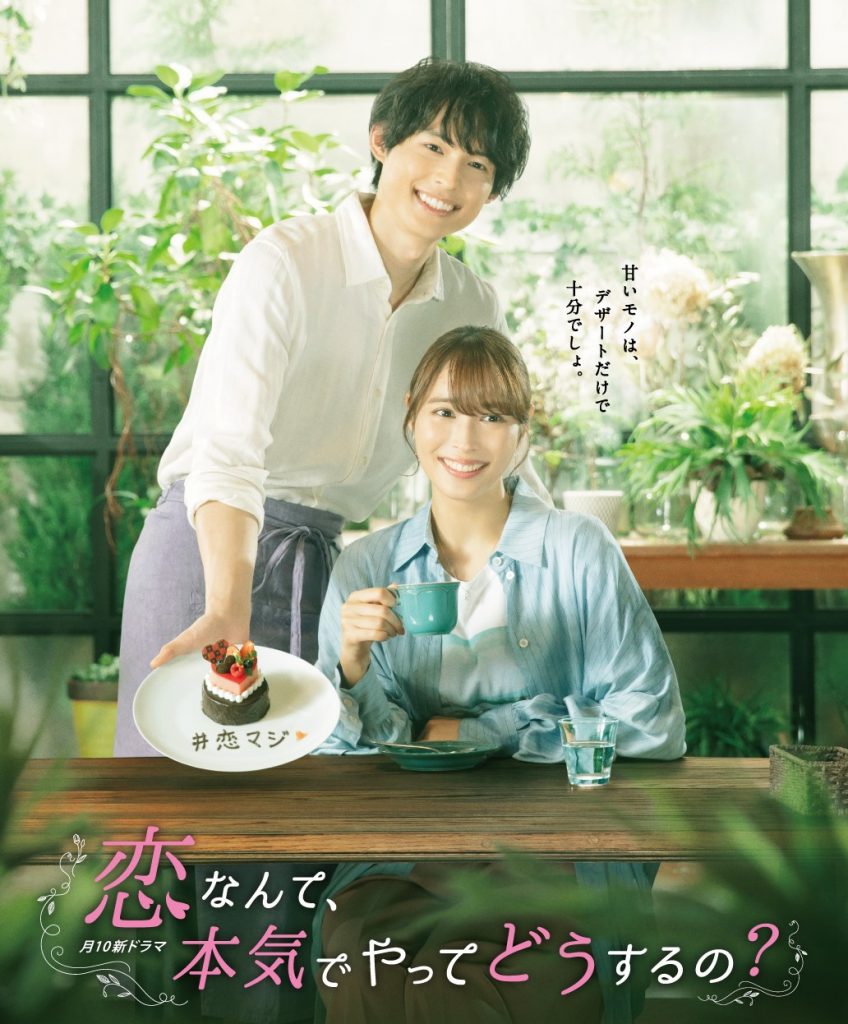 “Who Needs True Love?,” premiering Wednesday, June 1 at 7:35 p.m.
Six singles think they don’t need love. What happens when love finds them? Jun, Arisa, and Kyoko are three 27-year-olds who insist “true love” is unnecessary. Only dramas and fangirling touch their hearts and that’s enough. But when Jun, Arisa, and Kyoko meet Shuma, Katsumi, and Kaname, all bets are off. Three women who fled from love burst out of their shells and dive right into romance! What journeys await these six love-challenged people? Fully subtitled in English.

“Ketten Darake no Keiji 2 (The Eccentric Detective 2),” premiering Tuesday, June 14 at 7:35 p.m.
Fumio Hyakuno is an eccentric and awkward detective with numerous flaws who can’t break the rules of his own. However, he is highly observant and makes full use of his unique abilities to solve difficult cases. As his former partner has been promoted to head the precinct’s Criminal Affairs Division, he is ordered to investigate cases with a rookie. One day, Fumio finds the body of a dead man in the burgled home of a famous organizing consultant. Fully subtitled in English.

“Kanrikan King (Wild Card King),” premiering Tuesday, June
29 at 7:35 p.m.
Toichi Oga, the Director of the Tokyo Metropolitan Police Department’s First Investigation Division, is often called “King” for persisting in having his own way and ignoring opinions from people around him. Despite this, Toichi has the determination to solve cases. He calmly identifies the psychology and weakness of people. His only hobby? Doing card magic. Fully subtitled in English.

Premiere titles air on Friday. “Movie of the Month” premieres on the first Saturday. Movies are shown at various times. Check your digital on–screen guide for movie schedules, using either the GUIDE or INFO buttons (up to one week ahead). Or call NGN, Mon. – Fri. from 9 a.m. to 6 p.m. at (808) 538–1966 for inquiries or to request an e–mail of NGN 3 programming information. All movies are in the Japanese language with full English subtitles.

“Yowamushi Pedal (Yowamushi Pedal: Up the Road),” 2020 drama,
1 hour and 53 minutes.
Directed by Koichiro Miki. Starring Ren Nagasen and Kentaro Ito.
Sakamichi Onoda is a high school freshman nerd who loves anime. He’s not much of an athlete and doesn’t have any friends. One day, he joins the cycle racing club at school, where he unexpectedly displays talent as a bicycle racer. He finds happiness in working to exceed his limits for the friends he made for the first time and compete in the races with them. Now he must not disappoint his first friends ever and help them qualify for the national championships.

“Haikarasan ga Toru (There Goes Benio, The Smart Girl),” 1987 drama,
1 hour and 30 minutes.
Directed by Masamichi Sato. Starring Yoko Minamino and Hiroshi Abe.
Benio, a peppy tomboy, is surprised to learn that she has been secretly betrothed by her grandfather to a young officer named Shinobu Ijuin. Because of his family’s noble status, Benio must first undergo rigorous training to learn how to be a proper bride and wife before she can marry. However, because of her vivacious personality, this proves more challenging than anyone imagined.
“Hanakago Dochu (Flowers on the Road),” 1961 samurai film, 1 hour and
25 minutes.
Directed by Kudo Eiichi. Starring Misora Hibari, Azuma Chiyonosuke and Oka Satomi.
Yae and Kiku, daughters of drapers in Edo, must travel to Kyoto in place of their sickly fathers to attend to some businesses affairs. On their way to Kyoto, the two ladies are ambushed by a group of bandits. However a good Samaritan named Santaro comes to their rescue. Santaro is aiding a young samurai named Sanshiro who is on an official mission to deliver a message to a noble in Kyoto. When Yae and Kiku discover that a gang of assassins are after Sanshiro, they decide to help Sanshiro to complete his mission.
“Hashizo no Yakuza Hangan (Yakuza Official)” 1962 jidaigeki film,
1 hour and 31 minutes.
Directed by Masahiro Makino. Starring Hashizo Okawa and Satomi Oka.
Young master Fumikichi disguises himself as a yakuza in order to solve a case of a mysterious death.

“Hibari Torimonocho Kanzashi Koban (Edo Girl Detective),” 1958 samurai, 1 hour and 26 minutes.
Directed by Tadashi Sawashima. Starring Hibari Misora, Chiyonosuke Azuma, Kotaro Satomi and Junji Sakai.
Oshichi, a famous girl detective, takes it upon herself to investigate the murder of a woman which occurs during an event for the festival of Asakusa Shrine. Her investigation leads her into danger as she runs afoul of a high ranking official and his plans to find a hidden treasure.

“Kaibyo Noroi no Numa* (Bakeneko: A Vengeful Spirit),” 1968 horror, samurai film, 1 hour and 27 minutes.
Directed by Yoshihiro Ishikawa. Starring Ryohei Uchida, Kotaro Satomi and Kyoko Mikage.
Nabeshima Naoshige murders his lord, Ryuzoji Takafusa, seeking to gain power and steal his Lord’s wife. To avoid her fate, Lady Takafusa drowns herself along with her cat in a nearby marsh. A decade later, Naoshige’s efforts to steal another woman trigger a curse on him when she also commits suicide at the same marsh – forcing him to suffer the consequences of his past actions.

“Kiokuya -Anata wo Wasurenai- (The Memory Eraser),” 2020 drama,
1 hour and 45 minutes.
Directed by Yuichiro Hirakawa. Starring Ryosuke Yamada and Kyoko Yoshine.
University student Ryoichi’s happy life is shattered when his girlfriend Kyoko loses memory of him. Ryoichi is incredulous but then hears of an urban legend about a “Memory Eraser” and decides to seek help from an alumnus who is now a famous attorney. They explore the reason why Kyoko has lost her memory. Soon, they find themselves encroaching on sensitive territory: people’s memories and even deeper, closely guarded emotions. At the end of their pursuit lies a truth that will change their lives forever.

“Nihon Jokyoden Makka na Dokyobana (Bright Red Flower of Courage),” 1960 drama, 1 hour and 35 minutes.
Directed by Yasuo Furuhata. Starring Junko Fuji, Ken Takakura and Shingo Yamashiro.
Following the life of Yuki, a young woman who moves to the undeveloped countryside of Hokkaido to carry out her long alienated father’s will.

“Nihon no Don Kanketsu-hen (Japan’s Don Emerges),” 1978 action film,
2 hours and 11 minutes.
Directed by Sadao Nakajima. Starring Toshiro Mifune and Chiezo Kataoka.
Doublecrosses and backstabbings while the biggest yakuza bosses battle for the title of “Godfather of Japan” between eastern and western families. Violent story and an all-star cast, a must see!

“Sanbyaku Rokujugo-ya (365 Nights),” 1962 drama, 1 hour and
35 minutes.
Directed by Kunio Watanabe. Starring Hibari Misora, Ken Takakura and Yukiji Asaoka.
A touching drama depicting a love triangle between a young architect, Koroku, and two women, Ranko and Teruko. Ranko comes from a wealthy family and is offering to repay Kotaro’s family debts in exchange for marriage, but Kotaro is in love with his landlord’s daughter, Teruko. Things are further complicated when the wicked Tsugawa takes interest in both women, for his own marriage.

“Shinonomero Onna no Ran (In Blazing Love),” 1994 drama, 2 hours and 8 minutes.
Directed by Ikuo Sekimoto. Starring Keiko Saito, Rino Katase, Yoko Minamino and Masahiko Tsugawa.
Shortly after being sold to a geisha house at age five, Shizu is befriended by a fellow older geisha, Tsuru. After years of living and working together, Tsuru and Shizu manage to run the operations of Shinonomero as the proprietress and assistant. Despite vows to never to let their lovers come between them or Shinonomero, moments of weakness leave Tsuru and Shizu caught up in a web of betrayal and plunged into debt. With the guilt of losing Shinonomero to Udo, a yakuza who loaned them money, it is now up to young Shizu to redeem Tsuru’s honor and restore Shinonomero as their own.

“Suzuki-ke no Uso (Lying to Mom),” 2019 drama, 2 hours and
13 minutes.
Directed by Katsumi Nojiri. Starring Ittoku Kishibe and Hideko Hara.
Koichi is a son in the Suzuki family. He is a stay-at-home shut-in and decides one day to take his own life in his room and dies suddenly. The rest of Suzuki’s, father Yukio, mother Yuko and daughter Fumi, fall into confusion. The mother Yuko is shocked by her son’s death and loses her memory. Fumi lies to her mother and tells her “Koichi stopped being a stay-at-home shut-in and now works in Argentina.” But how long can father and daughter continue to deceive Yuko? What lies behind the brother’s suicide…?

“Watashi ga Motete Dousunda (Kiss Him, Not Me!),” 2020 drama, 1 hour and 30 minutes.
Directed by Norihisa Hiranuma. Starring Hokuto Yoshino and Fuju Kamio.
Kae Serinuma is a geeky girl, who loves to daydream about her favorite anime characters or her handsome classmates. One day Kae gets devastated when her favorite anime character dies. Unable to eat for a week from the shock, she loses a lot of weight. While she struggles to face her new physical self, she starts to attract more attention from those who didn’t notice her before.

“Yukinojo Henge (Handsome Disguise),” 1959 jidaigeki, 1 hour and
25 minutes.
Directed by Toshikazu Kono. Starring Hashizo Okawa and Chikage Awashima.
A period piece about an actor who gets caught up in a tale of revenge. 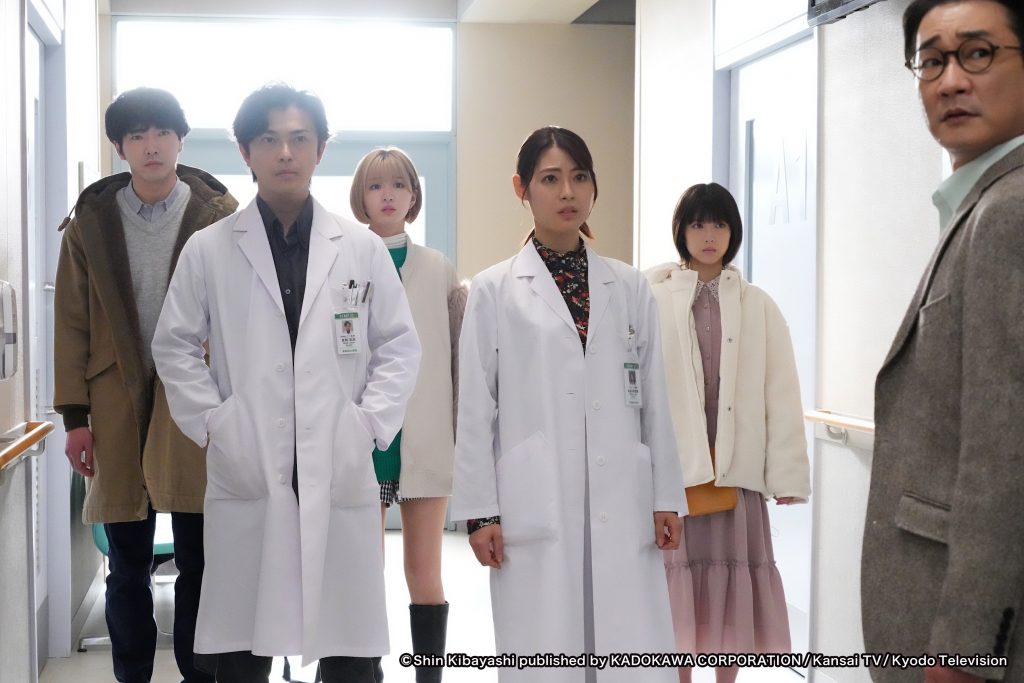