“Girls’ Generation,” Monday and Tuesday at 7:45 p.m.; repeats Tuesday and Wednesday at 2:15 p.m.
Jung Hee Lee is the second daughter of a family who owns a lingerie factory. She leads a group of teenage girls, whom they have chaotic adventures together. She meets Dong Moon Bae through a group date and Dong Moon immediately falls for her. However, Jung Hee has a crush on Son Jin who is a cute looking senior student of a boys’ school and begins to follow him around to draw his attention. Then one day Hye Joo Park, who is a transfer student from Seoul, joins their class and becomes the center of attention, creating jealousy and friction among the heroine and her friends. Despite Jung Hee’s attention, Son Jin is attracted to Hye Joo. However, Hye Joo has no romantic feelings for Son Jin as she is interested in Joo Yeong Choon who is an ex-gangster now turned to a local handy-man. It’s the story of their growing friendship, as the heroine and the new girl starts to bond despite the initial rivalry.
Starring Bona Seo Jin Chae, Jong Hyun Lee, Young Joo Seo, Hoe Hyun Yeo and Do Hee Min. 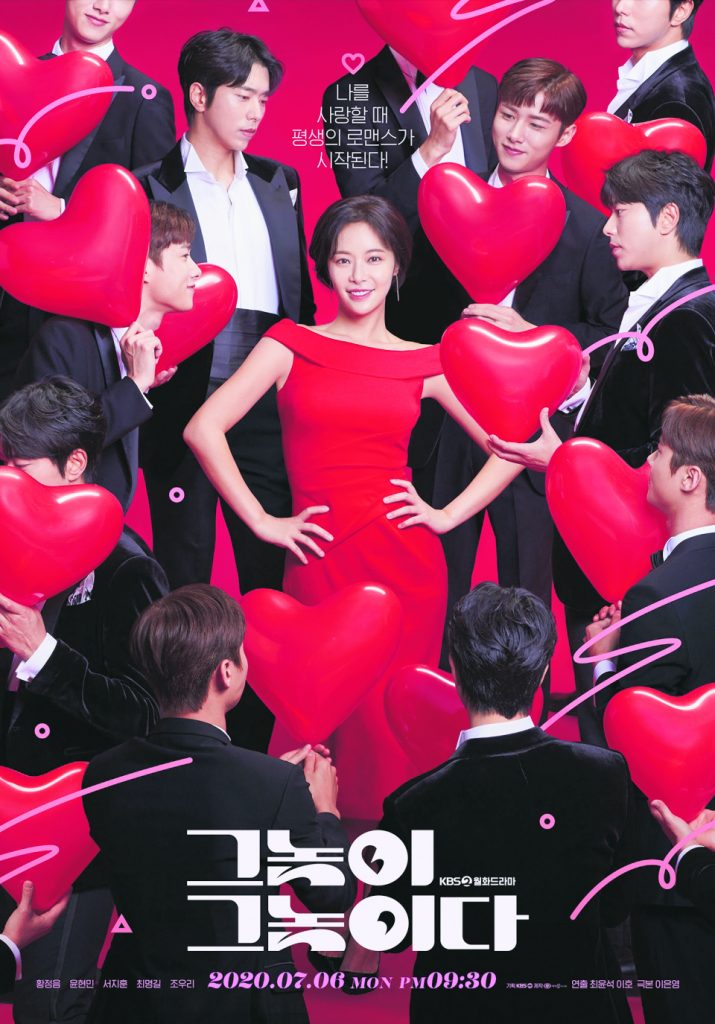 “Men are Men,” Friday at 10 p.m.
Hyun Joo Seo works as the leader of a webcomic planning team. She declares that she plans to remain single, but she receives confessions from two men: Ji Woo Hwang and Do Kyum Park. Ji Woo is the CEO of a pharmaceutical company. He has a cold personality and excellent business ability. Do Kyum is a popular webcomic writer. He is a sociable person. He and Hyun Joo grew up like siblings, but he has held a crush on Hyun Joo for a long time.
Starring Jung Eum Hwang, Hyun Min and Ji Hoon Seo.

“Still Loving You,” Saturday and Sunday at 9:20 p.m.; repeats Saturday and Sunday at 1:10 p.m.
The tale of a former teacher and student, Eun Soo Oh and Bit Na Kim, who meet again years later after they married brothers, Soo Ho Yoon and Soo Hyuan Yoon. They even become stepsisters after the remarriage of their parents.
Starring Young Eun Lee, Dong Jun Kim, Ha Na Park and Jung Won Choi.

“Dearest Lady,” Sunday at 6:30 p.m.; repeats Monday at 1 p.m.
An upbeat family-oriented TV miniseries with a mishmash of different generations and attitudes towards relationships. The difficulties that arise between mother and daughter mostly due to the men they are having a relationship with becomes the central plot that illustrates the challenges that single moms and divorcees face in today’s society. Their lives and the lives of the people they are connected to are depicted in a way that viewers can relate to through a fuzzy warm feeling called love.
Starring Min Kyeong Kang, Chang Hoon Lee, Hee Ra Ha and An Jo.

“Kim Su-ro, The Iron King,” Friday and Saturday at 7:50 p.m.; repeats Saturday and Sunday at 12 p.m.
This historical drama follows the life of Kim Su-ro, the legendary founder and ruler of Geumgwan Gaya who helped unify 12 small countries of the city-state of the Gaya confederacy, which dominated sea trade and iron working during the Three Kingdoms Period in the 5th century. Kim Su-ro also battles in competition for the throne from his half brother and rival Ijinashi, his former friend Seok Tal-hae, and the ambitions of Shingwi Ghan.
Starring Sung Ji, Jong-ok Bae and Oh-seong Yu.

“Doctors,” Saturday at 4:50 p.m. and 6:35 p.m.
Hye-Jung Yoo was a headstrong person in high school with a prickly, gangster personality. Due to her many childhood scars, Hye-Jung has learned to shut herself out from new people whom she meets. A meeting with her mentor Ji-Hong Hong changes everything as he plays a key role in transforming her life from a former delinquent to a compassionate doctor. They part ways after a report of their close relationship comes to light but meet again 13 years later when Hye-Jung becomes a successful doctor.
Starring Rae-Won Kim, Shin-Hye Park, Sung-Kyung Lee and Gyun-Sang Yoon.
“Running Man,” Saturday at 2:30 p.m.
A variety game show that features a series of games and missions that select team members must complete to win the race. As they fight to win prizes, and at the same time avoid penalties, the members show their chemistry with each other and the celebrity guests that occasionally join in on the fun.
Starring Jae-Suk Yoo, Suk-Jin Ji, Jong-Kook Kim, Ha Ha, Ji-Hyo Song and So-Min Jeon.

“The Trot Show,” Sunday at 4:30 p.m.
A variety show featuring trot music — a genre of Korean popular music known for its use of repetitive rhythm and vocal inflections — will be front and center in this special program. Fantastic performances from trot legends along with the hottest up and coming new stars will join in on this music ranking TV show.

“Enemies from the Past,” Monday through Friday at 9:20 p.m.; repeats Monday through Friday at 12:20 p.m.
After Go Ya Choi’s father had an affair ten years ago, she had to put college on hold and get a job to help support her family. She ends up meeting and dating a man named Ji Seok Min, whose Aunt turns out to be the woman her father had an affair with. Two families become entangled in secrets and try to find a way to reconcile.
Starring Yoon Young Choi, Won Gu, Na Yeon Go and Jae Mo Ahn.

“Homemade Love Story,” Wednesday and Thursday at 10 p.m.; repeats Thursday and Friday at 1 p.m.
Three families live under one roof at a boarding house called Samgwang Villa. Sun Jeong’s family lives a pure and simple life and doesn’t have a lot of money. Jung Hoo’s family is rich but is far from peaceful. Jung Won’s family looks perfect from the outside but is actually quite rocky. See how these families learn to live and love together as a family despite their differences.
Starring Jin Ki Joo and Lee Jang Woo.

“You Are Too Much,” Wednesday and Thursday at 7:45 p.m.; repeats Thursday and Friday at 2:15 p.m.
The series revolves around an impersonator who calls herself “Yoo Gina.” The real Ji-na is a pop diva who one day meets the impersonator, which then leads to their lives becoming intertwined. The two find ways to be there for each other as Ji-na lives a glamorous life but harbors a personal tragedy while Yoo Gina works at a nightclub to make a living but wants to become a real singer herself one day.
Starring Jung-hwa Uhm, Hee-jin Jang and Tae-oh Kang.

“You Are My Destiny,“ Wednesday at 6:50 p.m.
Chipper and optimistic orphan Sae Byeok Jang changes her life upon getting a corneal transplant from Na Yeong. To thank her late donor’s family, Sae Byeok Jang visits them, but finds that Na Yeong’s parents did not know their daughter died. She soon grows close to the dead girl’s parents.
Starring Yoon Ah Im, Hyun Joo Gong, Jae Jung Park, Jang Yong and Ae Ri Jeong.