Hawai‘i Uchinānchu Gail Shon Learns About Her Heritage in Okinawa

When I was in elementary school, I loved the activity books my mom bought for me, especially those dot-to-dot books where a line was drawn to join a sequential number of dots to reveal a picture. Recently, I was able to help a Hawai‘i Uchinānchu (Okinawan) connect the dots of her family history in Okinawa.

The first dot started when Hawaii United Okinawa Association 2007 President and current Nishihara Chojin Kai President David Z. Arakawa contacted me in November asking if I could help club member, Gail Shon, who would be on her first trip to Okinawa, connect with her Yonamine family and pay respects at the family haka (tomb).

I immediately called my Yomitan neighbor and Okinawa-Hawai‘i Kyokai vice president, Masaji Matsuda, to relay the request. Matsuda then called the Nishihara Chōyakuba (town office) right away. Besides the mayor’s secretary scheduling an aisatsu (greeting) meeting with Mayor Seishū Sakihara, he also called upon Kochi Kōminkan Kuchō (community center chief), Isao Onaga, who completed the picture by contacting Yoshio Yonamine, Gail’s relative, who served as a former town representative. Within several days, I passed along the great news to Gail!

Matsuda and I met Gail and her husband, Philip, who flew down from Yokosuka Naval Base a couple days later. After some mid-morning hugs and smiles, we jumped into Matsuda’s car and headed to Yōdore, the Royal Mausoleum for three Ryūkyū Chūzan kings, and Hacksaw Ridge in Urasoe. I was able to explain a little bit of what I learned about Hacksaw Ridge and showed them the spot where Private First Class Desmond Doss — who served as a medic during World War II — lowered and saved over 100 wounded soldiers.

We burned a lot of calories walking around and lunch was next on the schedule so Matsuda drove us to Yonabaruya in Yonabaru-cho (Yonabaru Town). We all ordered the nankotsu soba (pork cartilage with noodles) which had a piece of konbu (kelp) in it and a side order of inarizushi (cone sushi) each. Māsan! (“delicious” in Okinawan) 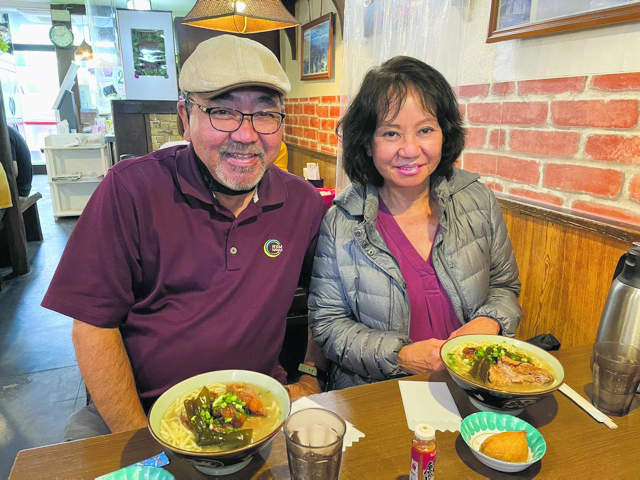 By the time we finished eating and enjoying some yuntaku (“talk-story” in Okinawan), it was time to head to the Nishihara Chōyakuba to meet relative Yoshio Yonamine in the lobby; Kuchō Onaga arrived a few minutes later. Matsuda assisted in confirming the relationship between Gail and Yoshio. It was a big help that Gail’s late relative, Mac Yonamine, mailed a family tree in rōmaji (romanized Japanese) and picture from a family party to Yoshio years ago. Mac was a founding member of HUOA’s Okinawa Genealogical Society of Hawaii and taught Hawai‘i Uchinānchu about the importance of finding their roots, paying respect to their ancestors, and establishing and maintaining kizuna (bonds) with families, friends and government agencies in Okinawa and Hawai‘i. Yoshio commented that the Hawai‘i relatives have better records than the Yonamine family in Okinawa!

We then moved to the second floor of the Nishihara Chōyakuba for the aisatsu meeting with Mayor Sakihara while flanked by reporters from the Okinawa Times and Ryūkyū Shimpo newspapers as well as a public relations staff member from the Chōyakuba. Mayor Sakihara was very personable and let Gail do her introduction and express her thanks and appreciation to everyone for their assistance in making contact with her relatives (she met another in the lobby who left early because of work).

Yoshio explained the connection with Gail, and then the three reporters obtained comments from Matsuda-san, Onaga-san, and Gail while I explained Mac’s efforts and accomplishments in Hawai‘i to Mayor Sakihara, thanks to David who had prepared me with notes ahead of time.

I explained, to the reporters, how the dots from Gail to Yoshio were connected by the great teamwork between many individuals from Hawai‘i and Okinawa. I talked about the importance of the Hawai‘i-Okinawa relationship and network and values such as yuimāru (spirit of cooperation) and icharibachōde where Okinawans believe people become family once they meet. Chōyakuba employee, Takayuki Arakawa, joined the meeting later and more dots were connected when Matsuda-san and I explained to everyone that he is David’s relative.

After snapping a few group pictures outside the mayor’s office before he had to attend another meeting, Yoshio escorted us to a family member’s haka so Gail could offer a bouquet of flowers. We continued on to the Kochi Kōminkan and then stopped by two houses. The first one is where Gail’s grandfather and siblings once lived while other Yonamine relatives, who we weren’t able to meet, still live next door.

Our last visit was to Kochigusuku (Kochi Castle). Not all castles here have stone or coral walls. Dirt hills that are built up are also referred to as castles so the area we visited and were walking around is referred to as Kochigusuku. We climbed up to a high point and visited Bïjiru which is where the Kochi people would pray for things like fertility, healthy childbirth and also trips/voyages when traveling to America or other places.

We returned to the Kochi Kōminkan to pick up copies of some family documents that Onaga made while we were checking out the Yonamine houses and Kochigusuku. Gail said her thank yous before we departed Nishihara and split up after a very productive day.

The next morning proved to also be busy as I escorted Gail and Philip to the Okinawa Prefectural Library, located near Asahibashi Eki (monorail station) on Highway 58, to introduce them to Librarian Hiroaki Hara. Hara recently spent two years at University of Hawai‘i at Mānoa, East West Center to obtain his Masters of Library Science and continues to be a great support to OGSH and to individuals conducting genealogical research.

Even though Hara wasn’t able to find much more information than Gail and Yoshio already had, they met him and toured the immigration corner. I was glad Gail could visit the library so she can also encourage other Hawai‘i Uchinānchu visiting Okinawa to utilize this great resource.

Gail sums up her experience as follows:

We were blown away with the quick planning and coordination by Colin, Matsuda-san and others. Within a short amount of time, we were scheduled to meet the mayor of Nishihara, Kochi Kōminkan Kuchō, and two relatives. I am feeling very happy and grateful to be able to visit the home where my grandfather was raised and the family haka as well as learn our yago (unique name for an Okinawan family’s house). Meeting two relatives was great, and I will be sharing the information I received with my family.

I appreciate the great amount of planning and coordination that went into scheduling and researching. It was an organized mission executed with military precision. Colin and Matsuda did a fantastic job in briefing us, translating, and providing lots of local and historical information. It’s so great to have this type of liaison that will help others find out about their ancestors.

Thank you so much. Words cannot convey my feelings of gratefulness.

A dot-to-dot children’s book is a lot of fun, but the picture drawn from connecting Hawai‘i and Okinawan families together is priceless.

Colin Sewake is a keiki o ka ‘āina from Wahiawā, who was assigned to Kadena Air Base in Okinawa in December 1994 to fulfill his U.S. Air Force ROTC commitment. There, he met his future wife, Keiko, and decided to make Okinawa his permanent home. Colin is now retired from the Air Force and the Air Force Reserves. He and Keiko have two children and live in Yomitan.