Day 1 opened with Hong, welcoming viewers in a vibrant Year of the Tiger t-shirt by Sumofish. Welcome messages from JCCH President and Executive Director Nate Gyotoku and Chair of the Board Donna Kawano was followed by an announcement of their silent auction which closes tonight (Jan. 21) at 11:59 p.m. HST. There is still time to get your bids in at the festival’s website jcch.com/nyof2022.

Following the welcome was a traditional Shintö New Year’s blessing by Rev. Akihiro Okada of the Daijingu Temple of Hawaii. To deepen the viewers’ appreciation for the New Year’s blessing ceremony, Dr. George Tanabe explained the significance of the attire, implement and items places at the altar. Then, Somei Taiko — led by its founder and director, Shuji Komagata — presented an energetic performance title “Soryu” which translates to “New Dragon.” Other highlights from Day 1 included a demonstration by the Kenshikan Kendo Club, Hanayagi Dance Academy and a vocal performance by Craig Shimizu’s student Amy Katsumoto.

Day 2’s program also included an Okinawan dance performance by Hooge Ryu Nuuzi No Kai Nakasone Dance Academy and an informative presentation of chadö (the way of tea) by Urasenke Tankokai Hawai‘i Association. Rev. Tad Iwata of the Tenrikyo Mission Headquarters of Hawaii explained the significance and symbolism of mochi in Japanese culture and the practice of mochitsuki (mochi-pounding) in Hawai‘i. And closing the day’s performance was a delicate and beautiful performance by Sawai Koto Kai Hawaii.

Finally, Day 3 started with the highly anticipated opening ceremony of the annual Honolulu Japanese Junior Chamber of Commerce Cherry Blossom Festival. The fourteen 70th Cherry Blossom Festival Queen Contestants were unveiled and you can now see them on the festival webpage cbfhawaii.com. Then, Chef Alan Wong demonstrated his version of ozoni, a mochi soup traditionally eaten on New Year’s Day.

Day 3’s program continued with a karate demonstration by Shotokan Karate-do International Federation, the history of the 101-year-old Nisshodo Candy Store, and finally, a performance by the Taiko Center of the Pacific.

Appearing throughout the three-day program were Drs. George and Willa Tanabe with interesting historical and cultural information about Japanese New Year’s practices as well as vocal performances by Craig Shimizu, the Singing Sensei’s, students. The entire program was produced by Pop Creative Media in a partnership with students of McKinley High School’s Tiger Media Productions and Roosevelt High School.

The mission of the Japanese Cultural Center of Hawai‘i is “To be a vibrant resource, strengthening our diverse community by educating present and future generations in the evolving Japanese American experience in Hawai‘i. We do this through relevant programming, meaningful community service and innovative partnerships that enhance the understanding and celebration of our heritage, culture and love of the land. To guide us in this work we draw from the values found in our Japanese American traditions and the spirit of Aloha.”

An Evening of Aloha

The 20th annual Go For Broke National Education Center’s Evening of Aloha Gala event was celebrated again virtually this year on Saturday, Nov. 13. from 3:45 to 5 p.m. PST. Known as GFBNEC’s primary fundraising event of the year, Evening of Aloha drew in a vast audience from across the nation with the intent of promoting and expanding support for the organization in order to enhance GFBNEC’s educational programming and outreach.

The event was hosted by David Ono, ABC7 News anchor and member of GFBNEC’s board of directors. He started the program by thanking all those who were watching as they paid tribute to the “remarkable legacy of the Japanese American soldiers of World War II.” He acknowledged that even though the program was being done virtually, GFBNEC still wanted to provide the personal stories of Nisei soldiers whose legacies continue to be relevant to today’s diverse and future generations.

George Henning, chair of GFBNEC’s Board of Directors, kick started the program by welcoming all those who were watching, which was proceeded by the posting of the colors by the 100th Battalion and 442nd infantry regiment color guard that took place at the National Memorial Cemetery of the Pacific in Honolulu, Hawai‘i. The National Anthem and Hawai‘i Pono‘i was sung by Staci Toji, a member of the GFBNEC board of directors and award-winning singer and musician Daniel Hall.

A hula memoriam was performed as a tribute to the 49 Nisei veterans who passed since last year’s Evening of Aloha event. Performing “Aloha O‘e” from each region that connects all the Nisei veterans to each other were Staci Toji (Los Angeles, California), Christie Kimura (Kahului, Maui), Brenda Sekigawa (Honolulu, O‘ahu), and Lux Umetani (Denver, Colorado).

Lindsey Sugimoto, GFBNEC’s torchbearer and member continued the program by stating her involvement with the organization was due to her grandfather’s participation in the Military Intelligence Service and because his legacy was now a part of her identity. It’s the reason, she states, that she wants to further expand racial tolerance towards Asian Americans especially within her generation. 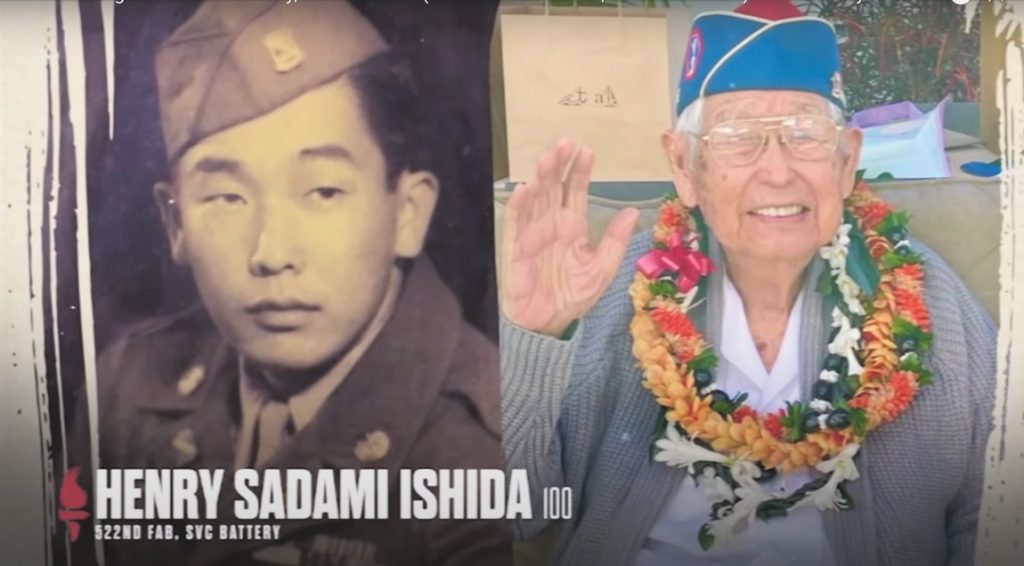 When asked why people who are not Japanese American should care about the Nisei veteran story, Craig Ishii, a member of GFBNEC’s board of directors emphasized that “it’s really an American story.” In terms of new efforts of expanding the stories of Nisei veterans, Ishii said he’s excited for GFBNEC’s Living The Nisei Dream virtual series, hosted by Sierra Katow, a comedian, television writer and descendant of a MIS Nisei veteran. Audience members learn about Nisei veterans through their descendants who are able to live the “Nisei dream,” a life in which has been made possible because of their Nisei ancestors’ fight for their country.

As a way to help continue keeping the Nisei soldiers’ story alive is a project called Letters to Home, a collection of letters and diary entries from Nisei veterans. Ono stated that since the last EOA event, the GFBNEC has received hundreds of documents that share what the Nisei veterans and their families were experiencing during World War II. Ono shared some gripping stories, tales in which showed the resilient and tragic tales from many Nisei soldiers during the most poignant part of the war and their lives.

Mitch Maki, GFBNEC’s president and CEO, then spoke about a special two part series that the organization is working on, which shares the stories of the 6,000 linguists who were intentionally hidden from the public eye in order to help the United States conquer and eventually win the war. Their contributions, said Maki, were pivotal in the success of also turning former enemies into close allies that has continued to today.

The next segment took Maki to Fairmount Cemetery in Denver, Colorado where he interviewed Nisei descendants Jon Campbell, Maddie Saito, Diane Shimamoto and Matt Shioshita. They shared how important it is for them to know their Nisei ancestors’ stories as they’ll further take with them their legacy with the life that they lead. Maki then met up with GFBNEC’s partners at the Japanese Culture Center of Hawai‘i and talked with Nate Gyotoku, executive director of JCCH, to discuss why the Nisei veteran story is important to its organization.

“This story is definitely important to the whole experience,” said Gyotoku. “Starting from the Gannenmono … to the Nisei … to the Sansei … and now to me as a Yonsei, I am here because of all of that work.”

Maki continued to the Nisei Veterans Memorial Center in Kahului, Maui, where the descendants of Nisei veterans found a related theme of being unaware of their ancestors’ contributions to the war because they wanted the next generation to have more of what they didn’t.

“They’ve made this place better,” said Deidre Tegarden, executive director of the Nisei Veterans Memorial Center. “It is now our responsibility to ensure we share that with the next generation.”

Katow then took the viewers to Far Bar in Los Angeles’ Little Tokyo district where the GFBNEC torchbearers were having breakfast and shared their feelings about being the descendants of Nisei veterans.

“As our country becomes more diverse and hopefully more accepting, [I’d like them to know] that all heroes come in all shapes and sizes, races, and gender,” said Sugimoto.

“We can take the vets as inspiration for others who might be in communities that do face racial discrimination,” said Soji.

“I found out in my uncle’s obituary that he was a veteran,” said Alan Hino as he held back tears. “I think at that moment I don’t think I’ve ever been more proud to say that I was Japanese American.”

Maki then wrapped up the Evening of Aloha program by stating his understanding for the “crazy year” and yet through it all, its audience members such as those watching, continue to support them. And for that he’s truly grateful. What the future holds for GFBNEC and its ability to share the Nisei veteran story is bright because of the collaborations with its continued supporters and various outlets such as A&E, Apple, Volkswagen, City National Bank, and Instagram influencers. The History Channel also reached out asking for the GFBNEC’s consultation in the production of a one-hour documentary special called Hidden Heroes: The Nisei Soldiers of World War II. Maki thanked the viewers and asked for their continued “help and support in maintaining [their] progress” in sharing the Nisei veterans story “with upcoming generations of all Americans.”

A plethora of food, art, crafts, and music will pop up once again on Saturday, Feb. 5 at the Kona Grill House in Kealakekua, Hawai‘i Island as the Haleki‘i Market Farmers Market and Craft Fair presents its monthly collective, which aims to promote, support and encourage its community’s small businesses and organizations.

Highlighting the Halekai‘i Market, that will take place from 9 a.m. to 2 p.m., will be keiki entrepreneur candidates who will present their offerings such as beauty aids, custom tech-art printing products, artisanal crafts, personalized home decor products, and specialized desserts. The event will also bring back the KOKUA2GETHER Donation Drive campaign for the following community awareness, sust-AINA-bility and cultural initiatives:

Established in February 2020, the Haleki‘i Market is a monthly community gathering that serves the Hawai‘i community with “local kuleana and ‘ohana-centered outreach, small business merchant offerings, sustainability focused and culturally enriched recreational programs and resources.” Haleki‘i Market is also a grassroots entity with support from KiK Ka‘eaikahelelani, Inc., a 501C3 non-profit organization. Since its start, the Haleki‘i market has grown popular within the community by collecting 101 pairs of second hand prescription glasses for the Lions Club of Kona, 2,000 feminie hygiene products for the Ma‘i Movement, and serving 75,000 meals through their partnership with the Feed Kona Program. They’ve also created a social media buzz with 1,700 Facebook and Instagram followers and continue to encourage young entrepreneurs in their individual creativity by providing mentored guidance from concept to the market floor. For more information, go to Haleki‘i Market’s facebook page at www.facebook.com/Halekii.