On Saturday, Nov. 6, the United Japanese Society of Hawaii presented its annual Nenchosha festivities with honorees that were recognized for 2020 and 2021. Since celebrations were pushed back a year for 2020 honorees because of the COVID-19 pandemic lockdown, they were combined with this year’s honorees in 2021’s first virtual, double UJSH Nenchosha. The complete program can be viewed on the United Japanese Society of Hawaii YouTube channel. 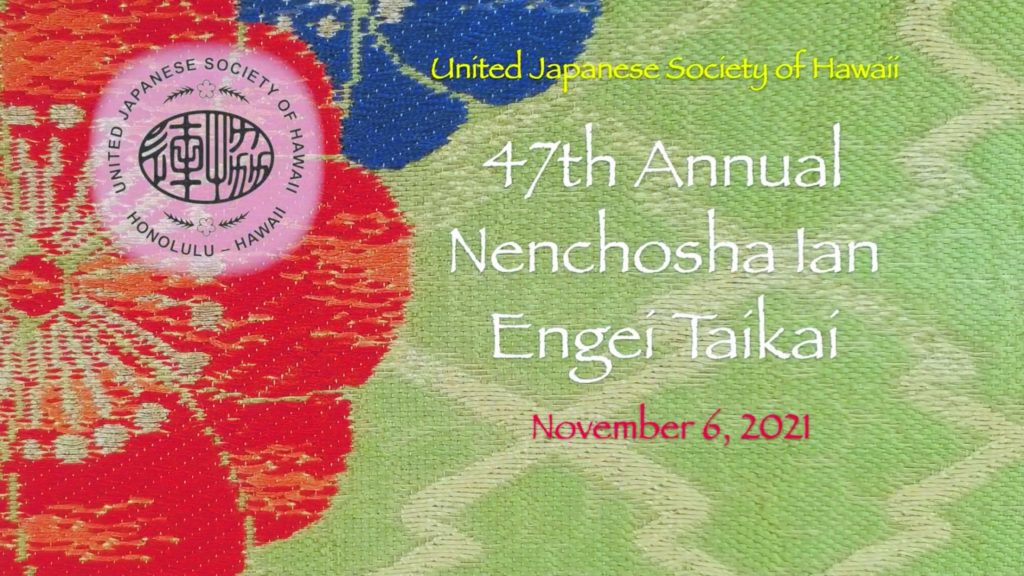 For the 46th/47th UJSH annual Nenchosha Ian Engei Taikai (Senior Citizens Festival), the organization asked various O‘ahu kenjinkai, senior citizen clubs and community centers to identify members who became octogenarians in 2020 and 2021 so that UJSH could recognize them. For this virtual Nenchosha celebration honored octogenarians were born in 1940 and 1941.

UJSH President Wendy Abe expressed gratitude to the generation that was born near the significant historical event of World War II. She said it was their spirit of gambari (perseverance) and gaman (self-restraint) that “helped the community get through a challenging time.” As part of the celebration, UJSH committee members distributed goody bags to the homes of the honored 80- and 81-year-olds.

Gov. David Ige, First Lady Dawn Amano-Ige and the Consul General of Japan Yutaka Aoki joined in virtually to congratulate the honorees. They also thanked them for their valuable contributions to the community.

According to a brief history presentation of the UJSH Nenchosha festival, the tradition began in 1962 on the grounds of the Japanese Consulate in Honolulu. It was usually held on the third or fourth Saturday in September within a week of Keiro no Hi, or Respect for the Aged Day, which falls on the third Monday of September. It is a time to reflect on how elders have paved the way for their descendants.

To close out the festivities, UJSH President-elect Kanzo Nara gave a kampai (toast), Mayor Rick Blangiardi congratulated all the honorees and UJSH Treasurer Norman Nakasone lead everyone in the tejime, a traditional Japanese rhythmic hand clapping performed at the end of a special event to bring the occasion to a peaceful, lively close.

Stated on the plaque, which was funded by the National Association of Letter Carriers veterans group, is a dedication that reads:

“On behalf of grateful State and Nation, this WWII Memorial Plaque is dedicated to the brave, valiant and self-less men and women who served in WWII who had a special tie to Hawaii and paid the ultimate sacrifice. This plaque also honors all the heroic men and women including our allied nations who fought across the globe in Europe and in the Pacific theater in defense of freedom and liberty. Our American warriors represent our “Greatest Generation” and built the United States of America into what we are so very proud to call the land of the free, and the home of the brave.”

Nisei veterans, descendants, state officials and honored guests were among those in attendance to witness the unveiling of the plaque within the World War II Memorial site. Welcome remarks were made by retired United States Air Force Col. Ronald Han, director of the State Office of Veterans’ Services, followed by a prayer from American Legion Chaplain Michele Hauser, and remarks from Gen. Kenneth S. Hara, Hawai‘i Adjutant General, retired Chief Master Sgt. and Chair of the State Advisory Board on Veterans Services Bridget Komine, and Howard Komine, representing the National Association of Letter Carriers before the unveiling of the plaque and gathering for pictures.

It’s a befitting dedication within the Memorial site; a serene space even among the hustle of Honolulu’s city life, created 77 years ago. Memorial services continued in that very spot after the bombing of Pearl Harbor, along with ceremonies and particularly when new names were added to the site’s base. The plaque is a great reminder to honor, as the Memorial site states on its monument, “… ALL AMERICANS OF HAWAI‘I WHO DIED IN THIS WORLD WAR, THAT THE BEAUTY AND FREEDOM OF OUR LAND MIGHT BE PRESERVED FOR ALL HUMANITY.”

Wednesday, Nov. 17 was “Utility Scam Awareness Day.” With the holidays approaching, there is a greater risk of people who will be targeted by scammers. Factors such as the COVID-19 pandemic, an increase in unemployment, and many people who are overworked and overstressed, causes for a ramp up in desperate people looking to take advantage of their next scam victim and, especially, more victims who fall prey to the scammers. Hawai‘i utility companies are asking customers to remain vigilant as scammers will increase their calls and outreach this holiday season.

Hawaiian Electric, Hawaiian Telcom, Hawai‘i Gas, Honolulu Board of Water Supply and Kaua‘i Island Utility Cooperative, along with the state Office of Consumer Protection and Honolulu Police Department, are working to combat scammers who target customers by posing as bill collectors and utility workers.

According to a recent press release by Hawaiian Electric, scammers will get more creative in their schemes these next few months, spoofing caller IDs so customers think the call is from a legitimate source or targeting third parties — such as real estate listing agents — to convince customers that they need to pay overdue bills in order to avoid disconnection.

In order to help the public from becoming their next victim, the utility companies offer these important red flags to watch out for:

Customers need to be on high alert and recognize these scams even though they are becoming more emboldened, elaborate, and especially when they threaten to disconnect service unless a payment is made. Bottom line, utility company’s will never call you to threaten power being shut off if you don’t pay them right away. And generally, if the call sounds uneasy or seems out of the blue to what you would normally receive from a utility company, hang up and call the company’s direct customer service line to confirm.

“Consumers should be wary of anyone threatening disconnection and pressuring you to wire money or pay with gift cards,” said Stephen Levins, executive director of the State of Hawai‘i Office of Consumer Protection. “It’s safe practice to cut the call short and contact the utility’s main office directly to verify your account status before providing any personal information or form of payment.”

For more information regarding scam awareness tips or up to date utility news, go to hawaiianelectric.com.