Underdog Champion for the Community

Editor’s note: This bimonthly series, “Honoring the Legacy,” is a partnership between The Hawai‘i Herald and the Japanese Cultural Center of Hawai‘i. It celebrates the achievements of Japanese American men and women who live the values of earlier generations and continue their proud legacy. The authors are retired physician Melvin Inamasu and Violet Harada, a professor emeritus at UH Mänoa. Both volunteer with JCCH. The complete interview with Barbara Marumoto, the subject of this month’s profile, is available at the JCCH Tokioka Heritage Resource Center. It can also be read online at jcch.soutronglobal.net/Portal/Default/en-US/RecordView/Index/9594

In 2012, Barbara Marumoto retired from the Hawai‘i House of Representatives after 34 years of service to the Wai‘alae-Kāhala-Kaimukī communities and to Hawai‘i at large. As a Republican in a Democrat-dominated legislature, Marumoto realized that she would always be fighting as an underdog. In over three decades of legislation, she challenged the status quo and persistently fought for changes to improve the quality of life in this state. She has always staunchly maintained that she was “not in the bill passing business, but the idea-launching industry.”

Raised on the West Coast

Marumoto spent her early years on the West Coast. Her dad, Takeo Okamoto, was a kibei — born in the U.S. but raised in Japan. When he returned to California, he got a business degree from University of California, Berkeley and had a successful import-export business near San Francisco’s Japan Town. Marumoto was just a tot when Executive Order 9066 forced her family into Tanforan. Even at that young age, she remembered living in a makeshift room that had been a horse stall. They were able to leave Tanforan when her father was hired to teach Japanese language at the Naval Language School in Boulder, Colorado. Her paternal grandparents, however, were not as fortunate. They spent the war years interned in Topaz, Utah.

In 1960, she married Wendell Marumoto, a lawyer, and moved to Hawai‘i. They have since divorced and Marumoto married retired CPA Richard Coons, who passed away in 2012. While she had attended classes at UC Berkeley, UCLA, and San Francisco State University, she finally earned a degree in sociology from the University of Hawai‘i at Mänoa. In addition to raising four children along with two stepchildren from her marriage to Coons, Marumoto started working for Sen. Fred Rolfing and then for Rep. John Carroll. Before long, she took a job in the Senate Minority Office, which she described as “the skeleton year-round office that services Republican Senators.” 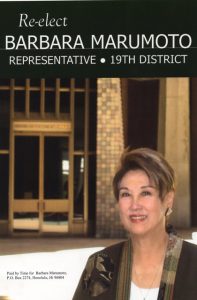 The pivotal event for Marumoto happened in 1978 when she participated in the Constitutional Convention, the watershed political event in modern Hawai‘i. It launched the careers of men and women who later became key figures in Hawaiian politics. Along with Marumoto, they included Gov. John Waihee III and Honolulu Mayor Jeremy Harris, as well as legislators like Carol Fukunaga, Helene Hale, Joseph Souki, and Les Ihara, Jr.

Her six years with the Senate Minority Office gave her an invaluable perspective on the inner workings of the legislature. She said, “I knew people and they knew me. I had helped to draft bills. I had listened to debates on the floor. I knew the issues.” According to Marumoto, the Hawai‘i State Con Con (Constitutional Convention) delegates were an eclectic mix of individuals. “There was a big block of people who wanted to enact initiatives. They were called the independents. There was another group of more establishment people, like Sen. Robert Taira and Sen. Donald Ching. And then, there were the law school students that were led by John Waihee.”

She noted that many people wanted reform in the judicial selection process because they didn’t want the governor to have wholesale control. Financial people wanted a check on spending. Unions wanted to preserve their workers’ rights. She said, “There were so many things that needed to be changed, constitutionally. Importantly, the delegates were non-partisan. There were no party lines. By going through this constitutional process, we were mandating the legislature to comply.”

Marumoto had ideas for creating a more effective and efficient government. She said, “I believed that we needed limits on our debt. The state was paying so much in interest. I had a spending ceiling passed. It was applied to the General Fund. There was also a debt ceiling enacted. At the Constitutional Convention, it was affixed to be 18.5%. So, that’s as much interest as we could pay every year. We may authorize $500 million dollars in Capital Improvement Bonds but the interest we pay would not be more than 18.5%.”

Education was also a priority for Marumoto. “I wanted to make the Board of Education a non-partisan election, not run as a Democrat or Republican. We also needed a change in the re-apportionment because legislators were drawing boat harbors around politicians’ houses. That reapportionment was also approved.”

A major change that Marumoto championed was a return to staggered senate elections. She explained, “Nadao Yoshinaga, an influential Senate leader, had changed the Senate elections to where everybody was running every four years instead of a staggered approach with half of the offices being elected every two years. He wanted a total change — the whole Senate.” She strongly believed that staggered elections would limit control of the representative majority making takeover attempts. She forwarded a proposal to change it back to staggered elections and it passed. Marumoto chuckled, “After that, Yoshinaga used to kid me. For years, he’d visit me every opening day of the legislature and say, ‘Hey you, you’re the one. You changed the Senate.’” In total, seven of her eight Con proposals passed, however, since these proposals did not carry names of the people introducing them, there was no personal recognition.

In the same year of the Con Con, Marumoto decided to run for a House seat as a Republican from the Wai‘alae-Kāhala-Kaimukï district when incumbent Steve Cobb decided to make a bid for the Senate. By then, she had been in Hawai‘i for 18 years and she no longer considered herself a mainland Japanese. She laughed, “I kind of blended in.” A tireless campaigner, Marumoto waved signs from the curbs and walked house to house in East Oahu neighborhoods. She acknowledged her wide network of supporters along with the impressive reputation of the Marumoto family. Not only was her husband a lawyer, who had campaigned for other Republican legislators, but her father-in-law was Masaji Marumoto, the first Japanese American to be appointed as a Justice to the Supreme Court of Hawai‘i. In that first race, Jack Larson, an incumbent Democrat, won one of the two seats in the district. Marumoto won the other seat.

The Challenge and the Reality

As one of the neophyte legislators, Marumoto’s goal was “serving the people, not building monuments to myself, not going for higher office, not building my resume. I just wanted to serve the people of my district.” However, she candidly recognized that making changes as a Republican in a Democrat-controlled legislature was an uphill challenge. She had to serve on numerous committees because Democrats held the leadership positions. “They heard the bills that they wanted to hear, and they passed the bills that they wanted to pass, and Republicans were always at the bottom.”

Educational reform was one of her targets, but she readily acknowledged that it was tough to enact change. Bills always got watered down. It took years just to pass a bill keeping children safe from riding to school in the beds of pickup trucks. As a minority member of the House, Marumoto said, “You were not included in certain meetings and caucuses. But it’s okay. You tended to work with chairmen who were willing to hear your bills, who were willing to pass your bills. Nothing monumental but several small bills I was happy to work on.”

As an underdog, she realized that you could “kill bills, but not ideas.” She served as Hawai‘i House Minority leader from 1984-1986 and again from 1998-2000. Throughout her service in the Legislature, Marumoto was relentless in meeting with people and speaking for or against bills.

In over 30 years as a member of the House, Marumoto championed legislation that supported small businesses, children’s safety, tax reduction and fiscal reform. Samuel Slom, a former Republican member of the Hawai‘i State Senate, said, “It is amazing how many meetings and events Barbara attended.” She garnered numerous leadership awards, among them the Presidential Leadership Award, Hawai‘i Women Lawyers President’s Award, Legislator of the Year from the National Republican Legislators Association, Legislator of the Year from the Hawai‘i Medical Association, and a Certificate for Patriotic Civilian Service from the U.S. Army.

The impact of her ideas influenced bills introduced by fellow legislators. A 2012 article published by the Hawai‘i House Minority Caucus, indicated that other legislators have imitated her brown tree snake prevention bill. The article further stated that the All-Terrain Vehicle measure picked up her ideas to prohibit passengers, ban those under 16 from using ATVs, and required helmet use. In addition, her proposals to deter irresponsible landowners from keeping messy and neglected properties were copied in both the Senate and the House.

Marumoto has also staunchly believed in the power of partnerships with community agencies. Over the years, she worked with organizations including the Honolulu Japanese Chamber of Commerce, the Junior League of Honolulu, and the Historic Hawai‘i Foundation. She also served as a state director for Women in Government and was on the advisory board for the UH College of Arts and Sciences.

Looking back on her record in the Legislature, Marumoto said, “I worked very hard for the people in my district and tried to help them with their battles. A lot of the work is unsung. If you attend hearings and you read the bills, you always have some changes you might suggest. It may be manini [small], it may be large, but you have an effect, an impact on the legislation. And I always talked. If I told them [other legislators] I didn’t like a certain bill, they were very reluctant to bring it to the floor because they knew I was going to speak against it.”

A concluding note that captures her can-do attitude: for years, Marumoto has worn a Statue of Liberty costume to July 4th parades and other civic events in the state. For someone who started her life during World War II in a horse stall, she has symbolized Miss Liberty — a torchbearer seeking a better quality of life for all people in Hawai’i.