The Staff of Life for the Okinawan People

I had an eerie feeling walking through a wooded area on a path rarely traveled. I was tracing the footsteps of my late uncle, Junichi Nakasone, to a communal well abandoned many decades ago. It was his daily responsibility to collect and haul water from the well for the boarding house where he resided. My mind traveled back in time as I lingered in the still and quiet, imagining Junichi and people young and old at this gathering place and the conversations and laughter that would fill the air.

Junichi did this chore each afternoon while attending school at the prestigious Kenritsu Daiichi Chugakkō in Shuri, Okinawa in the early 1940’s. And it was his job to boil beni imo (Okinawan sweet potato) every evening for himself, the other eight students and the obasan (aunty) who oversaw the boarding house. He also went with the obasan to the market each week to purchase beni imo. My uncle did not come from wealth; I believe those chores allowed him to offset the cost of the boarding house.

This story was told to me by Yoshishige Takaesu, who I met while on trip to Okinawa in 2017. He was 88 years old at the time. He was my uncle’s boarding roommate and close friend. He said day-after-day, the purple potato was all they had to eat.

Junichi was born in Hawai‘i and left at age 3 along with his sister Yoshino, who was 5, to live with my great grandparents in Aza Yogi in 1930. Aza Yogi, which is part of Okinawa City today, was approximately a six-hour walk to the school. The boarding house allowed Junichi the opportunity of a lifetime to attend the leading academic institution for boys at the time.

Where Did Beni Imo Come From?

According to George Kerr’s book, “Okinawa, The History of an Island People,” beni imo was brought to Okinawa in 1606 by Noguni Sōkan, who was stationed at a Ryūkyū (Okinawa) trading post in the southern coastal district of the Fukien Province, China. Noguni read Chinese texts on botanical and agricultural subjects and experimented with various plants in a garden at the trading station. He saw promise in the To-imo (Chinese sweet potato), only recently brought to the Fukien coast. He believed if it could be cultivated in Okinawa, it might prevent famine which so often affected country villages due to frequent typhoons, times of drought or crop failure. Beni imo could survive typhoons, was drought tolerant and could grow in soil not suitable for other crops.

The plant is of Central or South American origin. Spaniards took it to Europe before 1500. In 1570 the Spanish took it to the Philippines and prohibited it from being exported from Luzon. But traders took it to the China coast, where Nogumi first observed it about 1600.

Beni imo had taken root throughout Okinawa in just 15 years and it became a staple for the Okinawan people. Noguni Sōkan had demonstrated its value to Okinawa, and it would make its way to Japan. On June 19, 1615, Richard Cook, the English trader at Hirako, recorded in his diary that he planted the first potatoes from Ryūkyū in Japan. According to a document, “History of Okinawa,” prepared by Ijichi Sadaka in 1878, a Japanese named Ryuiemon brought the sweet potato from Ryūkyū to Yamakawa Village in Satsuma in southern Kyüshü between 1665 to 1675. From Satsuma, beni imo cultivation spread throughout Japan.

Noguni Sōkan came from the town of Noguni, Okinawa, in the district known today as Kaneda and Chatan towns. “Sōkan” is most likely a government title, and he worked for the central government of Shuri under King Sho Nei. Noguni Sōkan’s real name is not known. (okinawanatheart.com.)

Growing Up With Beni Imo

Ryokichi “Rick” Higashionna was born in Shioya, Gushikawa in 1935. Shioya is a small village on the eastern coast of Okinawa and had a population of roughly 300 people at the time. His ancestors had rice patties, beni imo plots, vegetable gardens and salt flats. Shioya means “house of salt” and people in the village were farmers and salt makers.

Higashionna said like other small villages, they were food self-sufficient. Families grew vegetables and raised pigs, goats and chickens. When families were experiencing hardship and were short on certain foods, other families would share to help them get through. And when a family harvested a pig, they would share what they could with other families. It was their way of life; they had a support system to sustain themselves. Issei brought that way of life with them and formed sonjinkai (clubs representing villages) throughout the Okinawan diaspora. His village was bordered on one side by a stream and that allowed his family to grow rice. Higashionna said rice was grown only in areas where streams ran through, which was primarily the northern region of the main island. The Haneji Täbukwa (or the rice field of Haneji) in the Nago area were the most notable. And because of the lack of transportation, many Okinawans in the southern portion of the island may have never eaten rice let alone having seen rice. And if rice was available, most people could not afford it.

According to “Okinawa Migrants to Hawaii” by Y. Scott Matsumoto, Ph.D., Professor of Public Health at the University of Hawai‘i, many immigrants to Hawai‘i said they never saw white rice until they arrived in Hawai‘i. Majority of the Okinawan immigrants were from the southern portion of the main island. (evols.library.manoa.hawaii.edu/bitstream/10524/476/2/JL16133.pdf)

I asked Higashionna when times were difficult prior to World War II, was beni imo the main, if not the only source of sustenance? He said his family was better off than most families. “We would have soup, we lived by the sea so we had fish, or another side dish would go with beni imo for lunch and dinner.” His family boiled the purple potatoes in the morning for the day’s meals. “For breakfast, beni imo was it. And because it was boiled in the morning it was delicious. We would sit around a basket of beni imo and we would say, kwatchï sabira (thank you for the food) before peeling the skin to eat,” he said. I believe those words were echoed at mealtime in homes across Okinawa. And when food was scarce, those words held far greater meaning.

My Aunty Yoshino, who survived the Battle of Okinawa, returned to Hawai‘i in 1948. She told her children that prior to the battle, all they ate was beni imo and kandabā (leaves and shouts of the sweet potato plant). All she took to school for lunch each day was one potato. Her classmates, whose families had the financial means to afford rice would want to trade their rice for her beni imo. 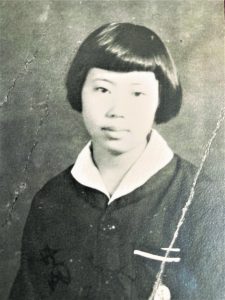 Yoshinae’s daughter, Eleanor Nakama-Mitsunaga said, “my mother’s family live in Naha and were city people with no garden to raised vegetables. As in small villages, people would share and bring them kandabā.” But during those desperate times before the war all they had to eat was kandabā jüshi (a rice porridge with beni imo leaves). That was meager fare for a family of means, which speaks to the scarcity of food. Eleanor said her mom would want to trade rice for the sweet potatoes. “My mom said beni imo was a treat.”

Liz Teruya is a Sansei living in Honolulu. Her mom, Toyoko Maeshiro Teruya, was born in Shuri and she and her family had moved to Taisho-ku, Ōsaka. Liz is not sure why they moved but they had family there and assumed it was for better opportunities. Many Okinawans had migrated to Taisho and established a community there. This was before World War II when her mom was 6 or 7 years old. Liz’s mom told her that girls at school with wealth wore pretty dresses. “My mom would say I hope to own a pretty dress one day,” said Liz. Those girls with the pretty dresses had white rice to eat. Liz recalled, “my mom would say I wish to eat fluffy white rice one day.” All Tokoyo and her family had to eat was beni imo.

In the middle of the night on March 13, 1945, the U.S. firebombed Ōsaka until early morning the next day. The bombing occurred periodically until Aug. 14. Ōsaka was devastated and more than 10,000 civilians were killed. Toyoko and her family survived the bombing. They lived on beni imo, but fresh water was hard to come by. Out of thirst, Toyoko drank dirty water and got very ill and loss function of a kidney. She and her family moved back to Okinawa in the late 1940s or early 1950s. Although much of Okinawa was destroyed by the Battle of Okinawa, they were home and had family there.

Beni Imo is a Superfood

The famous Dr. Mehmet Oz listed Okinawan sweet potato No. 1 on his list of five “superfoods.” Beni imo is listed along with gōya (bitter melon) and tofu as Blue Zones’ top three longevity foods of Okinawa (bluezones.com). Okinawans over the age of 65 enjoy one of the world’s highest life expectancies and Okinawan women are the world’s longest living. Okinawa also has the world’s most centenarians per capita. Beni imo was a major factor in the health and longevity of the Okinawan people. In 1949, 67% of the traditional Okinawan diet was sweet potato. Only 2% was fish, meat or poultry. (Wilcox et al [1] scholarly article). The American Heart Association and the American Cancer Society endorsed beni imo for its antioxidant and other nutritional properties in mitigating risk for cardiovascular disease and cancer.

Sadly, because of Western influence, the younger generations are no longer benefitting from one of the world’s healthiest diets. Fast foods and processed foods have become part of the eating habits.

Okinawans immigrated to Hawai‘i in the early 1900s. I cannot make the claim that they brought the beni imo to Hawai‘i but that is a logical conclusion. Beni imo is a popular ingredient in Hawai‘i, we see it in a range of culinary offerings. From fine dining to home cooked meals to a myriad of bake goods and even shochu, a distilled liquor.

Rick Higashionna is 86-years-young, a retired civil engineer who ran his own firm. He also was the Director of the State Department of Transportation under former Gov. George Ariyoshi. We met over lunch at his home, and he made a heart healthy meal of beni imo and gōya tofu champurü (stir fry) — the three ingredients of Blue Zones longevity foods. The beni imo and gōya came from his garden, which has a variety of vegetables and herbs found in Okinawa. I asked if there was a specific reason why he eats beni imo and the other Blue Zones longevity foods? He said, “because of its simplicity and I grew up eating those foods.” Higashionna was not aware of the Blue Zones’ rating; those are his comfort foods. As they say, “you are what you eat” and Higashionna is living proof; he is in great physical shape.

My late grandmother, Kamei Nakasone, grew beni imo in her garden in Wahiawa. And I grow beni imo in the garden that was once hers. I never look at beni imo simply as a sweet potato. It’s a heritage food with an incredible history. It was the Staff of Life for the Okinawan people. It allowed them to be resilient and to also thrive. From that historic perspective, beni imo is truly a super food.

I pledge to include more beni imo in my diet. Kwatchï sabira!