Fixed-gear bicycles. A movement that has taken hold of the recent generations, providing two-wheeled travel that boasts a different view of the world. The energizing sun, the feel of wind sweeping past your skin as you churn over asphalt impregnated with UV rays; the sensory overload that makes the journey the destination. The once-neglected sights, sounds, feelings and smells titillate as you pedal your way through life making any commute a welcomed adventure. It’s no secret that parking and traffic congestion make driving in cities next to impossible. Why sit in traffic within the confinement of a metal box when you can view the beauty of the world while bettering your health? A shrunken carbon footprint combined with exercise keeps a rider connected with the natural order of the world. Travelling by bicycle is a privilege few have taken advantage of, but thanks to the popularity of fixed-geared bikes, commuter cycling has been revitalized. 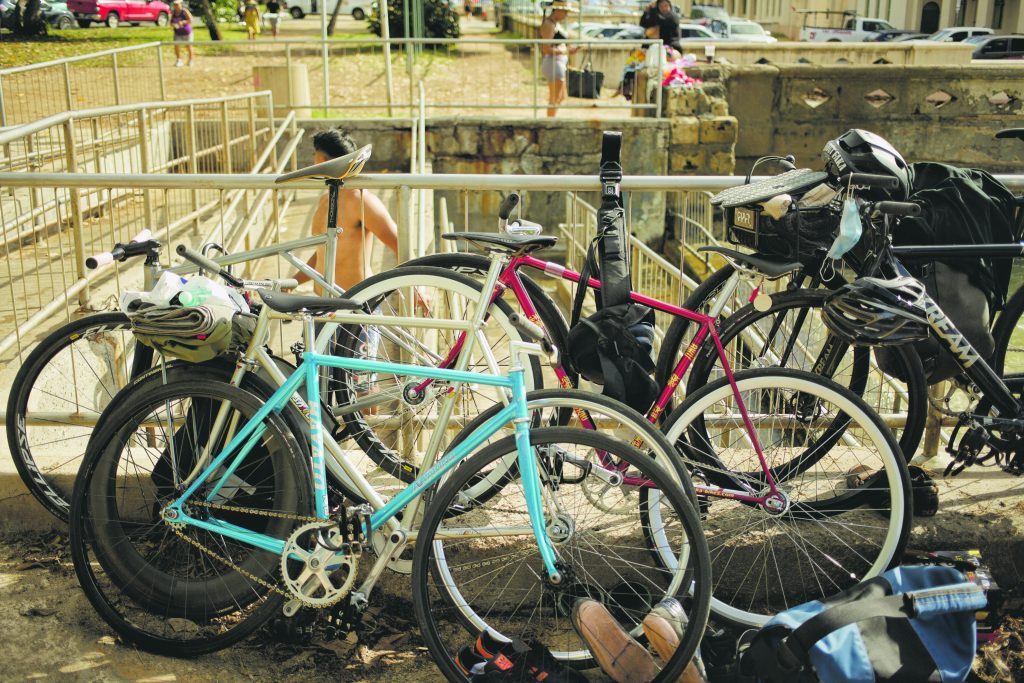 The bicycle began with the invention of a bike called the pennyfarthing, whose sustained forward motion was dependent on the rider constantly pedaling. This differs from the type of bike most are now used to, in that there was no coasting. The pennyfarthing must be pedaled constantly to keep the rider in motion. This original form of the bike made its way through history out of the hands of commoners and into competition on cycling tracks (also called velodromes); thus the term “track bike” is born.

Track cycling, now an Olympic event, has many different races riders can participate in, much like track and field. On the Olympic stage you have events like the team sprint, match sprint, keirin (cycle track racing), omnium and team pursuit. Each race has a different set of rules and procedures.

Within this world of track cycling there are two main schools of thought and practice. There are the racing traditions of the West which include the Olympics and of the Japanese. Most westernized cycle track racing is a bond between technological advancements and human will, whereas competing in a Japanese velodrome is determined solely by the strength and determination of the rider.

Whilst the West has moved on to modern materials and techniques like carbon fiber and vacuum molding, the Japanese have stuck to hand-brazing steel tubing to create their bicycle frames and the certified parts to match. A carbon-fiber frame is light and stiff, ensuring that each stroke of the pedal feels directly transferred to the road. By contrast, a steel frame flexes and manipulates, limiting power transfer but allowing comfort and durability — making the bike feel alive. There is a saying in the cycling world, “Steel is real,” and the Japanese know steel. They recall the tamahagane (Japanese-crafted steel) of a katana (traditional Japanese sword).

A Japanese artisan folds metal ore hundreds of times and compacts it onto itself purifying the metal. The Japanese extrapolated through endless trial and error that covering the rib of the blade with clay, whilst heat-treating the metal, allows the cutting edge to be hardened to become razor sharp, but also keeps the rib of the blade soft and flexible providing durability. This long-held knowledge of steel manipulation is at the base of why Japanese track-bike frames are the pinnacle of the bike world outside the velodrome. The dedication to craft and the knowledge of material is the perfect combination to create an amazing piece of machinery. The Japanese way of life is transmuted into all aspects of their culture including the work put into these bicycles.

After World War II, Japan sought ways to help stimulate their economy; thus Nihon Jitensha Shinkökai (Japan Bicycle Promotion Association) was born. Keirin, cycle track racing, was one of four major sports-betting events made legal by the Japanese government which developed a governing body to regulate everything revolving around Japanese velodromes. Eventually, NJS became the Japanese Keirin Association which is in charge of regulating all things keirin. All equipment used in events must be certified by the Japan Keirin Autorace Foundation to ensure no rider is at an advantage and more importantly that each part used is made strong and safe. The quality of endemic material, craft and tradition have ascended humble Japanese craftsmen into “artizens.“ All in all this world of racing has produced bicycles that are eye-candy workhorses fit for both the racetrack and the showroom.

Over the years keirin created an abundance of frames and parts. These bicycles are built strong enough to withstand immense amounts of punishment from world-class athletes and the horrific crashes they endure on the track. This translates to a very sturdy steed fit for any pothole-filled street across the world. As the sought-after NJS frames and parts leave Japan, the prestige of the velodrome, the energy of their original riders, stains the metal. Grounded in the dedication of their builders and the willpower imbued into the frame by keirin racers, the bikes regain new life as they are exported to corners across the world

In the United States particularly, fascination over track bikes begins in dense inner cities. New York, San Francisco and Chicago – amongst others – rely on bike messengers to deliver packages throughout their cities. This need for specialized delivery messengers has played a large part in the reintegration of fixed-geared bikes in society. The need for a dependable and durable bike, with few parts available for theft, provided a newfound affinity and home for single-geared bicycles. A bike messenger spends an entire day in the saddle pedaling, sometimes with cumbersome packages strapped to one’s back and swift delivery deadlines to meet. Active workers like these need a secure and reliable ride, and there is nothing more reliable than an NJS bike. As the bikes start to gain popularity with non-messengers the full potential of what a life outside the velodrome could be for a Japanese steed is realized.

The utility and durability of these bike frames are now accompanied by the possibility of personalization. While the frame is the heart and soul of the bike, modernized parts hung on traditional steel frames from Japan blend the best of both worlds. Although frames are still handmade, the parts that are used are mass-produced in factories to keep up with demand both on and off the track. Typically, the cost of a NJS bike built from top to bottom ranges from $1,500 to $2,000.

Here at home, Honolulu gained quite a few NJS frames over the years. The import of these bikes began in the late 1990s and early 2000s. Cycling videos made around this time by groups like Mash SF and Macaframa showcased their lifestyle and more importantly their bikes.

Local Hawaiian youth flocked to the sight of clean bikes with no cables or brakes sullying the ornate lines drawn by the simplistic set up of a track bike. The counterculture of riding with no brakes spliced with the endless customization factor fueled the want for keirin bikes across O‘ahu.

Developing young adults looking for a tribe to belong to settled on a track-bike lifestyle. Mobility at no cost drove the desire for finding the best bike that would last forever; thus, the NJS fascination began.

The connections between Hawai‘i and Japan continue to form. Japanese sensibilities have permeated life in Hawai‘i since the plantation era and the desire for NJS bikes are derivative of this influence. I am the proud owner of one of these bicycles and it has changed my life for the better. Be dedicated and work hard like the frame’s maker and original rider – a mantra repeated when laboring over asphalt. Push yourself, and use every last ounce of effort you have to get to where you need to go. We are all looking to belong, and belonging to a culture as healthy and sturdy as this one has enriched the lives of residents all over Honolulu.

Nick Kurosawa is a writer and a singer/songwriter. He was raised in Mänoa and graduated from Chaminade University with a B.A. in English. As a soul-pop artist he has written and produced several original albums and is a music instructor (see nickkurosawa.com).