THE ROAD NOT TAKEN 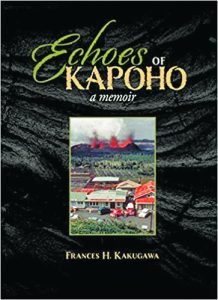 I shall be telling with a sigh

Two roads diverged in a wood, and I…

Do you ever wonder about all those “other roads” you have not traveled? There are three I can think of.

During those years as a classroom teacher, I spent my summers away from Hawai‘i, knowing I needed to return to my students, refreshed with new experiences. One summer, I sent a letter to a huge ranch in Nebraska, offering to be their summer cook. I pictured all the ranch hands around the rectangular wooden table, asking for seconds of steaks broiled in soy sauce. I’ve seen enough John Wayne westerns to know some of those ranch hands are the Marlboro man.

“My men would enjoy teriyaki steaks for a change,” the rancher called with a chuckle, and offered me the job. At the last minute, I turned into a chicken.

Another road diverged soon after. Early in my teaching career, I was a curriculum writer for the Hawai‘i State Department of Education, when a private firm contracted me to write a script for a play to be produced for high-school students. This was followed by an offer for a full-time job as a script writer.

A scriptwriter vs. a curriculum writer/teacher. It was clear which would get me to Hollywood. I began leaning toward the more glamorous, the more artsy, the less conservative. After weeks of living on a pendulum, I swung back to my mother’s voice: “Stay with the State. It’s more secure and when you retire, you’re going to need that State retirement and health insurance.”

I wonder what my life would have become, had I taken the road less traveled. Having my own “Cowboy Cuisine TV Show”? Discussing scripts over gin tonics today with Jim and Steve, as in Cameron and Spielberg?

I could have seen China on the back of a bicycle, peddled by a surgeon who, during the late ‘70’s, took out a tumored gallbladder. He was a poet surgeon, who wrote haiku, and other forms of poetry and poets often are led to each other. “I’m taking a group bicycling through China. Come with me.” An American, his parents were missionaries in China eons ago so he knew China.

I can’t ride a bicycle. We lived near a train station in Kapoho with constant traffic. My mother, the village dressmaker also had traffic leading to our porch. The train station later became a post office without any lessening of traffic and bicycles on unpaved road in all that traffic was “dangerous.”

“I’ll have a two-seater,” he encouraged. “You won’t need to peddle an inch. A bus will follow us throughout the trip. You’ll be quite safe.”  Do I dare take a leave of absence from my job from the District Office where no one would miss me? How dangerous can it be traveling with a surgeon?  Once again, I felt the clip of wings.

Where did I turn cowardly? Or was it something deeper than courage?

Abunai … abunai … dangerous. Somewhere in my memory is my mother’s voice echoing, “Abunai.” Was it a mother’s strong instinct to protect her children or was it her Nisei voice, having been raised by a single issei mother and a nisei brother? Her arranged marriage at age 19, clipped both wings to become a housewife. With abunai came that sense of deep responsibility, stability and loyalty to the workplace.

And yet, there was also that voice that said, “Go where I couldn’t go.” So, conflict was part of my Sansei history. Abunai, go…but perhaps with just one wing? Remember what happened to Icarus.

There is no fault in being who I became because there lived inside me a passion that would defy past generations of being totally Japanese, a passion that gave me 1½ pair of wings to be free. The other ½ perhaps kept me being Japanese with still an inch of gaman, shikata ga nai, and Abunai Abunai.

Today, there is another abunai-koto, dangerous thing, out there as Asians are targeted as enemies. The elderly are advised to not venture out without company. A friend in New York got a large dog and advised me to do the same.

“No one will attack you,” a haole friend said. “You walk like a very strong woman, always well-dressed. Your message is ‘Don’t fool around with me.’”

After moving to Sacramento where racism exists, and having experienced remnants from Dec. 7, I explained, “I dress even to go marketing or to the post office because I don’t want to look like an Asian right off the boat and be treated with disrespect and indignities.”

Someone recently asked how I felt being Asian during these times that it took Congress to pass the anti-Asian hate crimes bill. I am more adult now and I cower no more with my 1 ½ pair of wings.

THE ENEMY WORE MY FACE

Under the rising sun

It claws my spine,

It enters my body

To devour who I am.

So what do you do

Poems from “Echoes of Kapoho: A Memoir” (Watermark Publishing, 2019)

Frances Kakugawa was her mother’s primary caregiver during her five-year journey with Alzheimer’s disease. A native of Kapoho on Hawai‘i Island, she now lives in Sacramento. Frances has melded her professional training as a writer and educator and her personal caregiving experiences to write several books on caring for people with memory-related illnesses. She is a sought-after speaker, both in Hawai‘i and on the Mainland, sharing strategies for caregiving, as well as coping with the stresses of caregiving.