When I was 12 years old growing up in the Philippines, I was reading “Sweet Valley Twins” and playing outdoor games with my classmates. But 12-year-old Brennan Mitsuo Yamaguchi, a 6th grader at Maryknoll School, introduced a bill to the Hawai‘i State Legislature and saw it become a law!

Brennan co-created Senate Bill 936 with Sen. Glenn Wakai, a bill which allows the Department of Health to distribute information regarding seizure first aid: how to assist a person suffering from seizures.

What are a Seizure and Epilepsy?

According to the Epilepsy Foundation (epilepsy.com), a seizure is a “disruption of electrical communication between neurons.” It is a brain disorder. I picture it as a storm; like lightning flashes on our brain. The related term epilepsy comes from a Greek word that means possession, Kenda S. Fuller writes in the book “Pathology.” Ms. Fuller defines epilepsy as “a disorder of various causes characterized by recurrent seizures.”

The Epilepsy Foundation has a wealth of information on its website regarding this neurological condition. It reveals that “1 in 26 people in the U.S. will develop epilepsy at some point in their lifetime.” Often times, explains the foundation, the cause of epilepsy is unknown, but seizures can be associated with brain injury, trauma or infection. The abnormal electrical activity in the brain can manifest as changes in behavior, loss of consciousness, muscle weakness, rigidity or twitching.

Brennan’s journey with Senate Bill 936 started when a good friend whom he’s known since kindergarten was diagnosed with seizures in the second or third grade. He wanted to help her because “that’s what good friends do” and that “it feels better when kids your age want to help you.”

An avid baseball player, he initially held “seizure awareness” baseball games with the help of his parents. “We started small with grassroots events like an Annual Epilepsy and Seizure Awareness game in the Wai Kahala Athletic Club league,” Brennan’s mother, Melissa said. They handed out comic books (from Medikidz, for example) which made the concept of epilepsy accessible to kids; wore purple, the color of epilepsy awareness; gave away temporary tattoos promoting epilepsy education; put up lemonade stands and left fliers themed to this issue at equipment sheds. The reception was astounding. Some kids were even inspired to research epilepsy on their own. Then he and his family attracted local sponsors for their public-health education efforts, including Hawaiian Chip Company and Nabeya Maido.

Maryknoll School, which Brennan has been attending since kindergarten, has also been a crucial supporter of the student in his epilepsy-awareness community work. He has been influenced by Maryknoll’s motto which is “Noblesse Oblige – to whom much is given, much is expected.” Brennan breathes this motto, his father, Ryan Yamaguchi says: “He is a kid that always cares for others and looks out for his friends. Brennan realizes how fortunate he is to have what he has and wants to be able to look out for the next person.” The young boy’s caring, in turn, has made him be cared for by others within his learning community. His parents observe that “older students and players are always looking out for him as well at school.”

Brennan’s parents describe him as being a normal kid, but one who is determined to accomplish his goals. Melissa says he doesn’t need much encouragement to do his schoolwork and other activities; with a variety of interests, he possesses his own initiative and drive to see them through.

His daily routine includes going to school, doing homework and playing sports. He also takes care of his cats, Wasabi and Yuzu. Baseball is his main sport and he is on three teams. Melissa says, “In his spare time he has played several sports including Hawaii Kai Baseball, Wai Kahala Baseball, Manoa Pony 15U Baseball, Kalani Flag Football, Christian School Athletic League Basketball (Maryknoll) and Nuuanu i9 Basketball league on Oahu.” He has also dabbled in ikebana flower arrangement and paranku drums.

During the pandemic, when he couldn’t play sports, Brennan participated in virtual runs to support charities and went online for ukulele lessons. He also grew a garden in the family’s backyard. Now, however, sporting events are allowed on O‘ahu, so the Yamaguchis are finally back on the field!

“Sports makes me a better person because I have teammates to encourage me and help me work harder (on the field and for this cause). My teammates have always helped me spread awareness,” Brennan says. His parents add, “It’s great to celebrate a success yourself but better to celebrate with a team.”

It was baseball that allowed the Yamaguchis to cross paths with Sen. Glenn Wakai who had chosen Honolulu Rogue Baseball, the team Brennan belonged to, for a Friendship City agreement with Sakai-machi, a town in Ibaraki Prefecture, Japan. The team and their families travelled to Japan, where the kids played baseball and attended community activities and dinners with the senator. At one dinner, the Yamaguchis talked to Sen. Wakai about seizure awareness and came up with a mock bill. They then asked for his help in introducing a real version of this legislation; his response was “Let’s do it!” The bill was introduced in 2020 but was hampered by COVID, so it was reintroduced in February 2021 via Zoom.

For his community service, Brennan is the recipient of the Prudential Spirit of Community Award and the Presidential Service Award from the Office of the White House.

When the Yamaguchis were traveling in Japan, Brennan witnessed a teenager having a seizure on the train and helped break the boy’s fall. “It was scary because he fell suddenly,” he said. The teenager was immediately then helped by his friends and other authorities.

The Epilepsy Foundation of America’s First Aid for Seizures (epilepsy.com/living-epilepsy/seizure-first-aid-and-safety) includes the below protocols in the event of a seizure.

Melissa says “The first aid chart is free and downloadable, making this bill very minimal to no cost.”

Having passed both Senate and House, the bill is currently awaiting the final step to become a law: Gov. David Ige’s signature.

Sen. Wakai says, “Twelve-year-olds just accept the world as it is. It is rare to find a child focused on a solution, especially if they are not the one suffering. I was touched by Brennan’s compassion for his friend. If we listened to our children more we would have a less troubled world. We need to empower them and invest in their dreams.”

Renelaine Pfister is a physical therapist and writer based on O‘ahu. 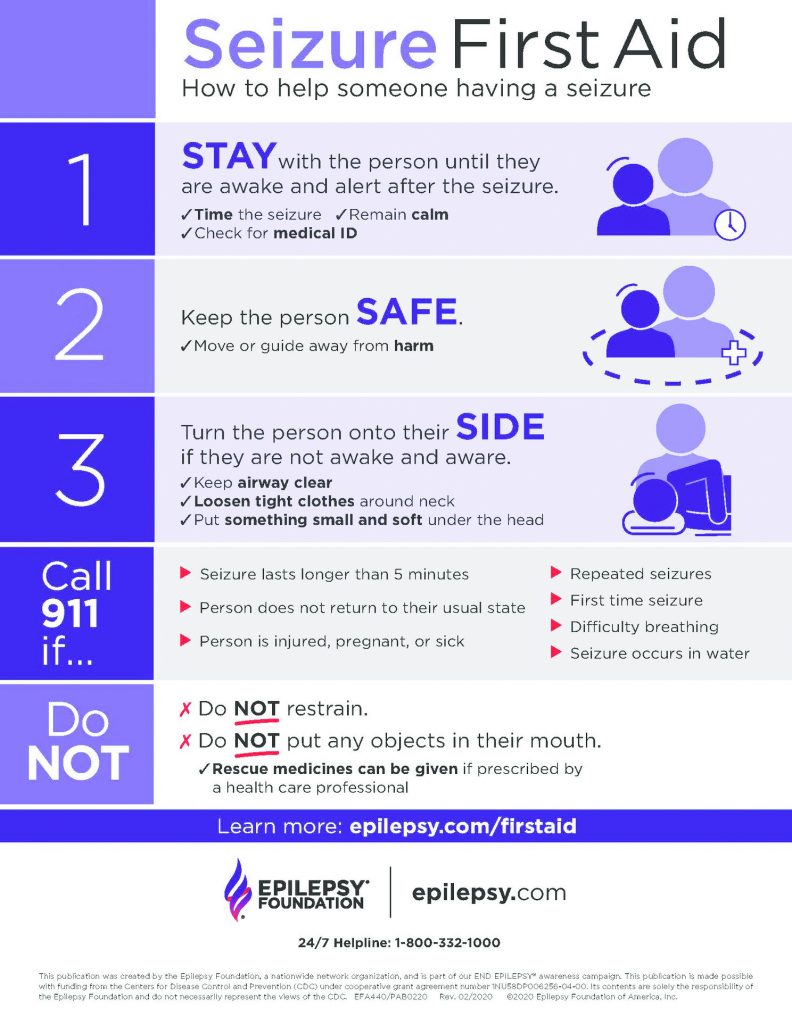