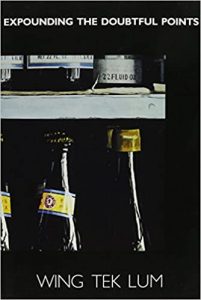 When I see a pineapple,

I do not think of an exotic fruit sliced in rings

to be served with ham,

more the summer jobs at the cannery

driving a forklift or packing wedges on the line.

When I hear the name “Duke,”

I envision someone other than that movie cowboy,

gravel-voiced, a true grit idol of the late night set;

instead I see a white-haired surfer by his long board,

palms so large, flashing smiles along the beach.

When I think of a man-of-war,

it is not the name of a Triple Crown horse

pacing a stud farm that comes to mind first;

rather I picture the Portuguese kind

whose stings must be salved by rubbing sand.

When I use the word “packages,”

it is usually not a reference to the parcels

rather the paper sacks I get

from the supermarket to lug my groceries home.

When I read the term “Jap,”

the image of a kamikaze pilot now turned to Sony exports

is not what I see;

mainly it is the Sand Island roundup and those old men

who still wince long after the 442nd has marched back.

When I think of Hawai‘i,

I do not fancy myself lolling under palm trees,

a backdrop of verdant cliffs, caressed by a balmy breeze;

instead I give thanks for classmates and our family graves,

this unique universe that we have called our home.

AN ALOHA ONLY I COULD FEEL

It was hot; there was little time.

We had come from so far away

that we could find him.

He had just returned from the fields

to avoid the noontime heat

and we arrived unannounced.

He was my father’s cousin,

of the branch that stayed behind.

I was not the first from our side

and we had corresponded before.

We talked about the usual things,

his crops, the factories

where his sons now worked,

the dead that were our common bond.

Maybe I was tired then,

from all the travelling,

for after a while

I did not know what else to say.

his daily life, his hopes and fears,

were so unlike mine.

What did he know of how I lived,

my business, all my learning?

something welled up in me,

a sense of pride, of being special,

that I belonged to him

and him to me,

that no one else would ever have,

an aloha only I could feel,

and of those dead we talked about

who loved and cared for him

just as they did for me.

Wing Tek Lum is a Honolulu businessman and poet.  Bamboo Ridge Press has published his two collections of poetry, “Expounding the Doubtful Points” (1987) and “The Nanjing Massacre: Poems” (2012).