Remi Yamamoto’s grandfather was Matsuo “Matsy” Takabuki, a veteran  of the 442nd Regimental Combat Team who used the GI bill to earn a law degree from the University of Chicago Law School and returned to Hawai‘i to become the first nisei postwar Democrat to win a seat on the Honolulu Board of Supervisors serving from 1952 to 1968. He would become a confidante of Gov. John A. Burns and business associate of developer and financier Chinn Ho. His appointment as a Bishop Estate trustee in 1972 resulted in a fury of protest because he was Japanese and not Hawaiian. For more than two decades he served as a one of five trustees of Bishop Estate, Hawai‘i’s largest landowner, turning it into a multibillion-dollar financial organization with investments from China to Wall Street that provides opportunities to the children of Hawaiian ancestry. 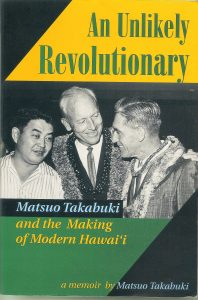 Yamamoto’s grandmother Ayako “Aya” Saiki had three sisters, a brother and parents who were forced out of their Artesia home in Orange County after the Japanese attack on the Pacific Fleet at Pearl Harbor in 1941. The family was housed in the horse stables in Santa Anita until they were transferred and incarcerated at Rohwer internment camp in Arkansas, according to a 1998 autobiography “An Unlikely Revolutionary” written by Takabuki.

In his introduction, Takabuki dedicates his book to his wife, Aya; to his three children Glen, Beth and Anne; and to his grandchildren. Takabuki died in 2017. His wife, Aya, had preceded him in death by 10 years.

Takabuki insisted that his narrative “not be devoted to war stories,” according to Dennis Ogawa and Glenn Grant who helped edit the manuscript.

Instead, he wanted to focus on “his years of financial experience from Merchant Street to Wall Street, his involvement with overseas investments in Japan, China and Hong Kong, and his commitment to the financial success of the Bishop Estate, his understanding of the educational philosophy of Kamehameha Schools, his observations on U.S.-Asia relations and his views on the challenges facing Hawaii in the 21st century.”

Takabuki said the message he wanted to leave to his children and seven grandchildren in this autobiography was “[N]ever question the fact that you’re as good as the next guy, no better or no worse, but just as good as you want to be. Whatever you do in your life should depend on your own ability and desire to be successful with hard work.”