The body of literature of Asian Americans who faced suspicion and prejudice, but were able to strive and endure, continues to grow. Collectively, Japanese in America were stunned by hate and distrust against them that spewed out after Dec. 7, 1941.

Next month, on May 11, Denshö — a Seattle-based Nikkei-legacy non-profit that for the past 25 years has collected and preserved oral histories of Japanese and has also produced a well-referenced online encyclopedia on Nikkei history and culture (densho.org) — will release “Facing the Mountain: A True Story of Japanese American Heroes in World War II.” 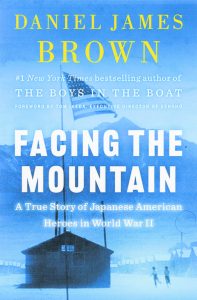 In the book’s foreword, Tom Ikeda, executive director of Denshö, says the book is the culmination of a project that began in 1995 to record the oral history of the incarceration of 120,000 Japanese immigrants and Japanese American Ancestry who lost their civil liberties at the start of World War II and whose stories were rarely told. Denshö in Japanese means “to leave a legacy,” Ikeda explained of his nonprofit.

Honolulu attorney Colbert Matsumoto — one of nine members on Denshö’s board — said, “Daniel James Brown does a great job of telling the story of the 442nd RCT and the incarceration of people of Japanese ancestry. Our hope is that this book will help inform millions of Americans about the American heroes who were once classified as ‘enemy aliens.’”

Brown’s work is the latest effort to trace the history of prejudice and discrimination faced by Japanese immigrants in the U.S. since their mass arrival in North America in the mid-1800s. The Nikkei experience was reflected in the similar fear, hostility and racism that Muslim and Arab Americans had encountered after the terrorist attacks of Sept. 11, 2001.

Last year, the pandemic sparked the latest wave of negative stereotyping of Asians in North America. In March, the Center for the Study and Extremism of California State University at San Bernardino reported that an analysis of police data shows that anti-Asian hate crimes in 16 of the America’s largest cities increased 145% in 2020.

Beginning with the attack by the Japanese navy on the Pacific Fleet anchored at Pearl Harbor on the first Sunday in December in 1941, Brown’s “Facing the Mountain” book chronicles the Japanese experience and follows the war through the experiences of the four Nisei men.

It goes into great detail explaining the training and battles of the 442nd RCT as well as what was taking place in Hawai‘i and in several of the 10 mainland internment camps. However, the parallel campaigns that might represent the valor of Military Intelligence Service Nisei veterans are missing from Brown’s narrative.

The reasons why Tokiwa, Miho and Shiosaki volunteered to be members of the 442nd RCT are familiar to many or most Japanese American readers – to be given a chance to prove their loyalty to their country. However, the regional and economic situations surrounding these historical figures’ actions were different.

Rudy Tokiwa’s family, who had been produce farmers in California’s Salinas Valley, was sent to Colorado River internment camp located in Poston in Arizona after Pearl Harbor. Eighteen-year-old Tokiwa, who went to Japan at  age 13 returned to the U.S. in 1939, volunteered from Poston internment camp, because if “he had to fight to earn respect of America, he’d fight.” He even purposely flunked a Japanese-language test that would have sent him to the MIS to be an interpreter, as he had wanted to fight more face-to-face and physically in an infantry unit.

In Spokane, Fred Shiosaki’s father, Kisaburo Shiosaki, began to lose customers at his Hillyard Laundry, which he had spent as many as three decades building, because he like other Japanese small-business owners encountered economic discrimination. The Shiosakis were allowed to stay in Spokane, because they were living in an exclusion zone east of the Cascade Mountains. Fred, who had once been classified as an “enemy alien,” defied his father by signing up when Pres. Franklin Roosevelt decided to allow nisei men to volunteer for a segregated, all Japanese American Army combat unit.

All three had been sent off to war with the message nearly all Nisei soldiers got from their fathers: “Whatever you do, don’t bring shame on the family.”

But it was different for Gordon Hirabayashi, a Seattle pacifist who had registered as a conscientious objector and joined the Quakers a year before Pearl Harbor. His parents were incarcerated behind barbed wire fences at Tule Lake in northern California.

Refusing to surrender his constitutional rights, Hirabayashi disobeyed both the curfew law imposed after the Pearl Harbor bombing and also Pres. Franklin Roosevelt’s 9066 Executive Order of internment. Echoing the spirit of the Nikkei “no-no boys” who had resisted the government’s loyalty questionnaires (see encyclopedia.densho.org/No-no_boys), as well as Japanese American draft resisters of that era, Hirabayashi was sentenced to 90 days at Tucson Federal Prison as inmate No. 3751. Hirabayashi’s defense was that the curfew law and the executive order were racially prejudiced, denied him due process and were thus unconstitutional. He was later sentenced to another year at Puget Sound’s MacNeil Island Penitentiary for refusing to be inducted into military service and refusing for the second time to sign a loyalty oath.

Hirabayashi was released from federal prison shortly after the war ended. He returned to the University of Washington, where, in six years, he earned his B.A., M.A. and Ph.D. degrees in sociology.

Katsugo Miho’s family was split by the war. The story of how the war divided this family was well documented in a 1966 Honolulu Star-Bulletin series on seven Japanese Americans in Hawai‘i that were split geographically and emotionally between Japan and the United States. The seven stories, written by the paper’s first Japanese American reporter, Tomi Kaizawa Knaefler, were later incorporated into a book “Our House Divided” and printed on the 50th anniversary of the Japanese attack (University of Hawai‘i Press, 1991).

When the war broke out on Dec. 7, 1941, three of the daughters of Katsuichi and Ayano Miho — Fumiye, Hisae and Rosaline Tsukie — were trapped in Japan. Two sons, Katsugo “Kats” and Katsuaki, joined the tsunami of 2,600 island sons who flooded local Selective Service Offices in March 1943 and volunteered for the 442nd RCT. Katsuaki Miho, who gave up medical school to volunteer to fight, was killed in a truck accident in June 1943 in Alabama while on special duty guarding German prisoners of war. The oldest brother, Katsuro, also tried to serve, but was rejected because of an eye problem. The fourth brother, Paul Katsuo Miho, was studying at Yale Divinity School. (All the Miho men have names beginning with the Japanese character “Katsu,” reporter Knaefler writes, which means loyalty.)

Shortly after the bombs fell on Pearl Harbor, “Kats” Miho’s University of Hawai‘i ROTC unit was assembled in a gym in Mänoa and transferred to the Hawaii Territorial Guard. Many of these cadets didn’t know how to fire a rifle but were issued five rounds of ammunition. The unit was temporarily inactivated and the Japanese guardsmen were discharged.

In Japan when the two young Miho women, Fumiye and Hisae, learned of the Japanese attack, “they began sobbing, trying to comfort each other, quaking, wondering aloud and fearing silently what was happening to their parents and siblings back in Hawai‘i.”

At one point during the war federal officials suspected that Fumiye, who held dual citizenship, was “Tokyo Rose,” a Japanese national who had infamously hosted a World War II Japanese-propaganda radio show.  (The real “Tokyo Rose” turned out to be Iva Toguri who was born in Los Angeles but stranded in Japan when the war started. After the war, she was returned to the U.S. and convicted of treason, serving six years in prison.)

Immediately after the Pearl Harbor attack, the siblings’ father, Katsuichi Miho, was one of hundreds of elderly Issei men who were taken from their homes by federal agents and jailed in the Sand Island Detention Camp to be later imprisoned on the mainland.

After the war, Hirabayashi became the chair of the Sociology Department of the University of Alberta. In 1987, the Ninth Circuit Court of Appeals vacated Hirabayashi’s conviction. His defense attorneys proved that the government had suppressed, altered and destroyed evidence in his original trial. He was 94 when he died in January 2012. Brown notes that four months later “President Obama — standing in front of an embroidered gold curtain in the East Room of the White House, with his members of his family looking on — posthumously conferred on Hirabayashi the Presidential Medal of Freedom, the nation’s highest civilian honor. As he presented the medal, Obama quoted from Hirabayashi himself: “Unless citizens are willing to stand up for the Constitution it’s not worth the paper it’s written on.”

Rudy Tokiwa, dependent on crutches and nine pieces of Nazi shrapnel in his body, died in 2004 at age of 79. In Italy, Tokiwa single-handedly captured eight German soldiers. After the war in 1987, he was among the 120 activists who began the crusade that resulted in the enactment of the Civil Liberties Act of 1988. The law declared that the mass incarceration of Japanese was “carried out without adequate security reasons and without any acts of espionage or sabotage” and was “motivated largely by racial prejudice, wartime hysteria, and a lack of political leadership.” Within five years 82,219 internees each received redress payments of $20,000 under the 1988 law.

Miho was 89 when he passed away in 2011.  When Hawai‘i was admitted to the Union on Aug. 21, 1959, Miho was elected to the first of five terms in the new State House of Representatives and later served as a District Court Family judge.

Fred Shiosaki, who retired in Seattle after a career as a city chemist for Spokane, said in an interview that even after all the apologies, belated medals, books and documentaries, “a lot of people — especially young people — don’t know enough about what happened to Japanese [in] America during the war. People forget what democracy is all about – that the least of us are supposed to be protected. But it doesn’t always happen. It’s a lesson of history that bears repeating.”

The 442nd RCT earned the distinction of being the most decorated Army unit for its size and duration of service. Brown notes the regiment and the 100th Infantry Battalion earned 29 Distinguished Service Crosses, 560 Silver Stars, 28 Silver Stars with oak leaf clusters (in place of a second Silver Star), 22 Legion of Merit Medals, 4,000 Bronze Stars, 1,200 Bronze Stars with oak leaf clusters, 36 Army Commendation Medals, 87 Division Commendations, and more than 4,000 Purple Hearts.

“Of the roughly sixteen million Americans who served in World War II, only 473 have received Medals of Honor,” he explained. “But 21 of those medal recipients came from the ranks of the 18,000 men who ultimately served in the 442nd.

At the end of his book, Brown wrote:

Those young men were the living embodiments of the spirit that has always animated America, the spirit that has held us together for more than two centuries — the striving, the yearning, the courage, the relentless optimism, the willingness to chip in and lend a hand, the fair-mindedness, the inclusiveness. They knew that they had been called upon to defend a set of simple but profound ideals – the highest ideals of America and the Western democracies – and having heard the call, they answered it, as did millions of young men in the first half of the 1940s. Most of them fought for those ideals on the battlefield; some like Gordon Hirabyashi, fought for them in courtrooms.

“Facing the Mountain” will be available locally at the Japanese Cultural Center of Hawaii Gift Shop (shop.jcch.com) and at national booksellers’ sites.