Sometimes, out of nowhere, someone will send a simple email or a handwritten letter, or will even follow me out after a lecture to remind me why we write and read poetry. Three years ago, Etsuko — who is in her 90s — attended one of my Hawai‘i lectures. During my writing workshop, she wrote a poem that I later published in my “Dear Frances” column for caregivers.

She recently told me, “You are keeping me alive and giving me joy every day. I read your poems in ‘Dangerous Woman’ every night and sleep with it under my pillow. I am writing poems now, simple ones.”

She continued by saying that she had made notes in the book and marked her favorites including these two poems:

I can hardly be seen

Among the mountains and the clouds.

Lost and found in

One can be beautiful.

— From ‘Dangerous Woman: Poetry for the Ageless’” 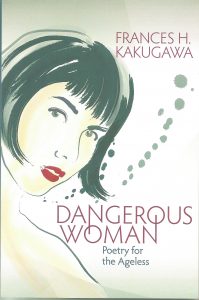 In one of her own poems, Etsuko thanked me for listening to and agreeing with her. Yes, her message was clear, age doesn’t turn us into non-persons. I wrote these poems when I was in my 30s, looking for myself; here we are again with that same plea of “I am still here.”  She hopes to have my book cremated with her.

The neighbor’s rooster is crowing again.

Don is a man I often said hello to at the gym we both attended before the pandemic. I had been drawn to his wife, because she came to the gym during her chemo treatment and seemed very comfortable with her appearance after losing all her hair which never grew back. Don wrote saying his wife had a recurrence of cancer and had died in January.

He said she had kept my “Dangerous Woman” book at her bedside and while cleaning out their apartment in preparing himself to move into a retirement home, he found a bookmark in my book. It was marked to a particular poem which, when he read it, made him feel it was the last message from his wife to him. “This has helped me so much in my grief,” he wrote.

And that has made

— From “Dangerous Woman: Poetry for the Ageless”

My first visit to Sacramento came from an invitation to speak at a synagogue on giving care to loved ones with dementia. I read a few of my poems to support my message on humanizing the lives of caregivers and their loved ones. An elderly woman followed me out after my lecture and said, “ Your poems made me cry for the first time since I was 15. My heart has been frozen until now.”

She rolled up her sleeve and showed me the tattooed numbers on her upper arm. I gasped and could only say, “Talk to me.”

She told me her story: She was 15 when her father and brothers had already been taken away by the German guards, and she would never see them again. She was alone with her mother when their physician came with a piece of paper. “You’ll be safe,” he told them, “See, I wrote those guards a note that your mother has heart problems and won’t live long so they will leave you alone. And I have signed this as her doctor.”

The woman said how happy she was, knowing they would both be safe since the statement was written on the doctor’s stationery. Soon the knock came on their door and she proudly showed the paper to the guard. He laughed, tore the sheet and tossed the pieces into the air and took both of them away to Auschwitz.

Finally, after days of encountering the same responses, a woman in camp told her, “See that smokestack there? Your mother is in there, you’re not seeing her again.” And she never did.

“I vowed on that day,” she said, “that I would never ever cry again. My heart was frozen that day and I have not cried until today when I heard your poems.”

I wrapped my arms around her with tears covering my face, “Crying is good, isn’t it?”

And sometimes, it will come from a young child in your classroom:

The signs were there: when students need to talk

they hang around my desk, playing with my stapler or

realigning my pens and pencils until there is privacy

for courage to emerge.

“I get up at three in the morning and hear my dad crying.

I go downstairs and he’s sitting on steps, crying in the dark.

He was in the Vietnam War; He won’t talk about it

I know because I always see him on the steps.

I wish I knew how to help him.”

No child ought to be wakened at 3 a.m. by a  father’s tears.

No child ought to have dreams of brightly crayoned images disrupted by black ashes.

I wasn’t trained to undo the nature of war.

I didn’t know how to banish the phantoms of war.

“I wrote these poems about the war.

Maybe your dad will find this book helpful.”

A few weeks later, she wrote in her class journal:

My dad is always reading your book.

He carries it around with him and he’s not getting up anymore,

he’s not crying anymore. Thank you for helping him.

Is it okay if I keep the book a bit longer? He wants to know,

did you know someone from the Vietnam War?

“Yes”, I wrote in her journal,

“Tell your dad I knew someone just like him.”

On the last day of school, once again she stood near my desk.

“I’m sorry for not returning your book, but my dad is still reading it. I hate to take the book away from him.”

“I gave that book to both of you. I’m so glad my poems help him.”

She held on to our hug, whispering,

— From “Echoes of Kapoho: A Memoir” 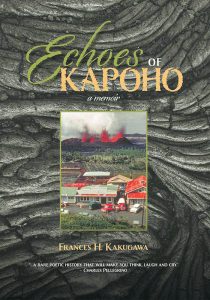 Growing up in remote Kapoho, I, too, found solace in poets long gone:

The dead kept me alive

All those years, growing up

Confined to a village so isolated,

So battery-run. Our three-party line

The speechless dead took me beyond

Until one day I discover an oracle

Within the pages, poets long gone.

For the me not yet formed.

Oh, how I mourn that “breath of ecstasy”

My soul can reach.”

It was the dead who gave me such dreams

And showed the woman I’d become

To wander where they could not go

And wonder at what got them there.

My morning still lay ahead, I still “had miles to go.”

And oh, how “I wandered lonely as a cloud.”

— From “Dangerous Woman: Poetry for the Ageless”

Frances Kakugawa is a former Hawai‘i Herald columnist. She was her mother’s primary caregiver during her five-year journey with Alzheimer’s disease. A native of Kapoho on Hawai‘i island, she now lives in Sacramento. Frances has melded her professional training as a writer and educator and her personal caregiving experiences to write several books on caring for people with memory-related illnesses. She is a sought-after speaker, both in Hawai‘i and on the Mainland, sharing strategies for caregiving, as well as coping with the stresses of caregiving.