(Programs are subject to change, without notice. For updated information, call 847–2021.)

In 960, an exorcist is called to the Heian capital. Examining a hideous sore on Taira no Sadamori’s face and hearing of other peculiar incidents all related to the long-dead Taira no Masakodo, he thinks his patient has become possessed.

Five members of popular boy band Arashi get involved in a drama about hijacking, hostages, a drug company accused of handling lethal medicine and family loyalty.

A small, out-of-the-way Tokyo izakaya — run by proprieter Heji — serves as a favorite hangout of people searching for nourishment of their bodies and souls.

Shizuka is shocked that her husband of 10 years, Takashi, has died on a business trip. Worse, she finds he was in the company of a high-end Ginza club proprietress with whom he had a double-suicide pact, but the woman survived.

Prosecutor Nao and attorney Madoka dated for seven years but after breaking up, they are hopelessly linked because of their jobs. When a major case pits them against the other, each pursues the truth from different standpoints and they start to see each other more and more.

In the Edo era, Heizö Hasegawa, aka “Heizö the demon (Onihei),” leads a band of samurai law-enforcers and uses reformed criminals as informants to solve difficult crimes.

Director at WEB Productions, Yui Higashiyama, loathes working overtime due to her workaholic father and fiancé. She tries to be efficient and finish her job on time. However, her peaceful days change after a new department head arrives.

Akiko Iwaki is a career woman who works hard at her job. She gets married to Ryoichi Miyamoto who has a daughter, so Akiko must now deal with housework and raising her stepdaughter.

An assistant police investigator of the Metropolitan Police Department’s Scientific Investigation Team does not care about this team’s scientific approach to evidence, rather noticing things the victims carried with them or treasured.

“The General’s Daugher,” Monday-Friday at 4 p.m.

2nd Lt. Rhian Bonifacio, an AFP Military Nurse dedicated to saving lives, is also an undercover spy trained by her father, Santiago Guerrero. But she learns Guerrero is an enemy who’s trained her to be used against her real father.

Sequel to “Soko ga Shiritai” takes you on a Japanese journey, highlighting foods and places that define the country.

The best murder, mystery and intrigue on Wednesday eve!

In the Rinkai area where the 2020 Tokyo Olympics is planned to be held,    Amagi Yu and his detective team tackle a wave of violent crimes that are complex, multifaceted and global. 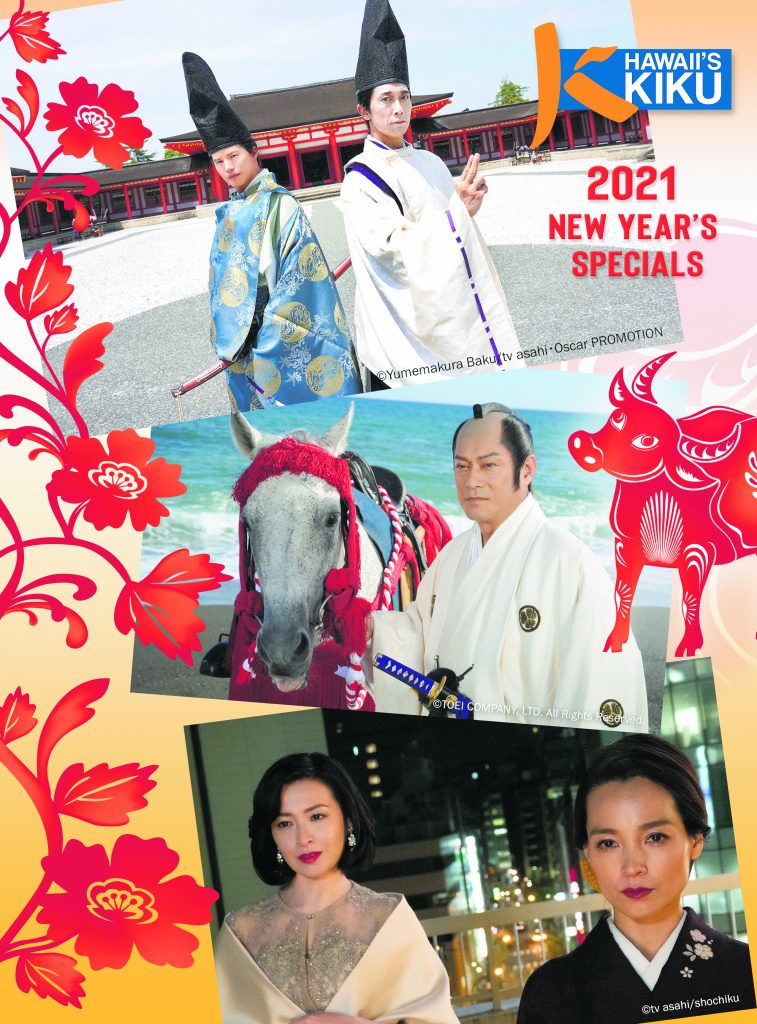 Widower Dr. Manuel Figueras falls in love with and weds Lena Dimaculangan. But on their honeymoon, a hired killer pursues Manuel who escapes death by entering a magic portal that turns him into his younger self. Manuel must choose between winning back Lena, who has remarried his protégé  — or starting another new life.

The successful, 40-year-old CEO of a construction company, Nathan Capi​strano, had grown up poor. Now wealthy, Nathan finds life at the top lonely and frustrating. He one day meets the spunky Dani, whom he views as a kindred spirit. Is it too good to be true?

Founded by Maui’s Ken Martinez Burgmaier, this series featured jazz and regional musical performances around the world since 1992.

Cecilia raises two daughters alone, but one day, her unfaithful ex Leandro reappears. Eight years after leaving them, the successful Leandro vows to support his family. Although her daughters welcome him, Cecilia cannot as easily forgive. Should she accept him back?

Top profiler Takuma Yoshito of the Kyoto Police Department is sentenced to 15 years in prison for rape and attempted murder. The crime victim wakes from her coma after a decade to exonerate him and free him from prison. Now he has the newfound ability to see things through a criminal’s mind.

Nao Kitazawa, a 34-year-old doctor, falls in love with Shinji Mamiya. But because Nao has juvenile Alzheimer’s disease, Shinji becomes determined to keep Nao bright and healthy. But how will life be 10 years from now?