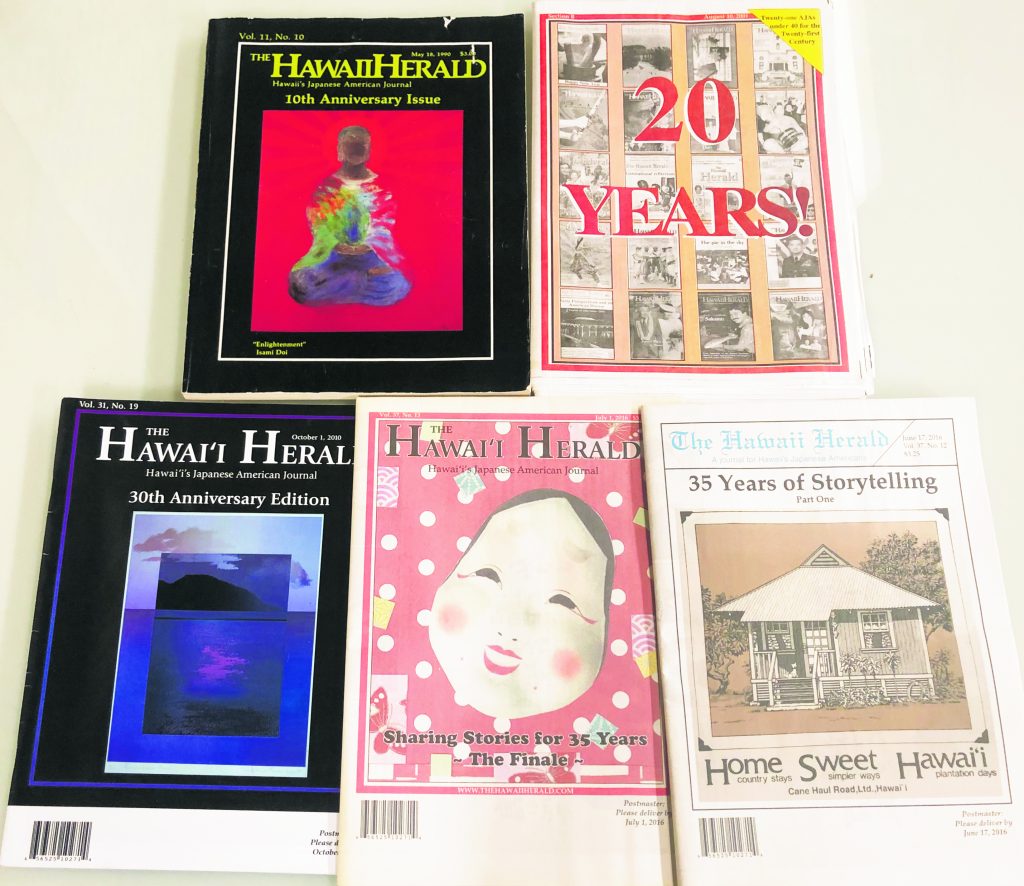 Forty, 75, 100 and 120 are just a few milestone number of years being celebrated in the Hawai‘i AJA community this year.

The Hawai‘i Herald is 40! And this year we also commemorated the 120th anniversary of Okinawan immigration to Hawai‘i and the 75th anniversary of the end of World War II. In this issue, moreover, we feature the Kuakini Medical Center’s 120th and Ishiharaya’s 100th anniversaries with tributes.

What’s a celebration without old friends? Herald’s former writer and managing editor, Gwen Battad Ishikawa, returns — exclusively for this issue — with a feature about Jon J. Murakami, Hawai‘i’s well-renowned comic-strip artist, illustrator and creator of the Herald’s “Generation Gap.” I also made a friendly phone call to retired editor of the Herald, Karleen Chinen, who was involved with our publication for about 30 out of its 40 years of existence.

In 1980, founding editor Kenneth H. Toguchi wrote that the “purpose of The Herald is to serve the Japanese American community, one of the largest and oldest immigrant groups in the state by gathering information on local events, issues, lifestyles and people.”

Over the decades, the legacy of The Hawai‘i Herald’s editorship was passed on to Arnold Hiura, Karleen Chinen, Mark Santoki, Warren Iwasa, back to Chinen and, most recently, me. I now work alongside an amazing team of people at the Hawaii Hochi Ltd.: the Herald’s staff writer, Ida Yoshinaga; advertising and promotions manager, Grant Murata; graphic designer, Izumi Okino; and layout and graphic designer, Asami Arai. Additionally, our skilled freelancers contribute stories, columns, comics and copy-editing services. Issues of the Herald would not make it to print on time (sometimes by the skin of our ‘ökole) without these talented people.

The Herald is moving into an age when information can be accessed in real time and in infinite, sometimes overwhelming, abundance. These days, Issei values can become more distant if we don’t find ways to perpetuate them by continuing to tell this generation’s stories. Our vision is to continue honoring Issei, Nisei and Sansei by sharing their anecdotes, experiences and wisdom that will pass their legacies down to Yonsei and Gosei generations. Aligned with this theme, Carolyn Morinishi’s personal story about continuing the legacy of her teacher, the late Sumako Azuma II, can be found on Page 8; soul-hop artists Nick Kurosawa and Ohtoro’s lyrics from the album titled “Yonsei” are on Page 10. And in this issue’s “Culture 4 Kids!” column (Pages 8 and 9), Morinishi and her mother, Marian Kubota, teach us about the Issei kachikan (values). Thanks to Morinishi and Kubota for teaching us the Japanese words for these core values.

I have been the editor here at the Herald for just six months now — only a micro-portion of its 40 years of reporting news that has affected Hawai‘i’s Japanese American community. To think about what to include in this special issue, in the past few months, I flipped through old Heralds to see what the first issues were like in 1980. In those days, I was just 8 years old, living in Kapahulu with my family and attending Waikiki Elementary School.

As I turned the old and musty-smelling pages of the bound and archived Herald issues stored in my office, I reminisced about what was popular in the 80s and 90s — Pat Morita, The Karate Kid, sumö wrestling, feather hairdos, jazz-fusion music by

Hiroshima, Tamlyn Tomita, “The Picture Bride” movie, Olympic skater Kristi Yamaguchi. And we can’t forget Kikaida, Fats Funai, yoyos and tamagochi! I also remember the Köhaku Uta Gassen (song contest) that would air on television every New Year. My mom and my grandma would talk about enka singers like Shinichi Mori, and we would sing along to Hibari Misora’s “Kawa No Nagare No Yö Ni.” Since then, my perspective of the AJA community has evolved and deepened.

From 2018, when I started as the Herald’s staff writer, I had already had some connection to my Chatan (Okinawa) and Yamaguchi (Japan) ancestral roots. The editor at that time, Karleen Chinen, sent me on amazing assignments. I got to dive deep into the community and attend commemoration events that reminded us of the Issei, gannen-mono, kanyaku-imin and nisei veterans who sacrificed so that we could go after our dreams and be anything we wanted to be. I learned that because of them, my baba, jiji and parents say, “Okage sama de.” I am what I am because of you — my ancestors and elders who brought Japanese and Okinawan values and cultural practices to Hawai‘i. The more I engaged and wrote about Hawai‘i’s community, the more I was able to connect the dots of my identity.

And I learned that The Hawai’i Herald has played a huge part in perpetuating the Hawai‘i-Japan-Okinawa culture which is like that of no other place, anywhere in the world.

I asked Chinen what she thought the Herald’s contribution has been to the Japanese American community, both here and abroad. She said that when she first started as a freelancer, she thought her purpose was to “just write feature stories.” But as she continued, she saw a broader picture. “I realized [the Herald] was playing a role in writing the history of the community,” she admitted.

There were several suggestions of guidance my mentor editor, Karleen Chinen, passed on to me besides the skills of editing. One was to read the book “The Japanese in Hawaii: A Century of Struggle” (written by Roland Kotani and published by the Hochi) so that I can understand the importance of my ancestral values such as gaman (endurance, resilience), gambari (persistence, a fighting spirit), kansha (gratitude towards others and the universe) and sekinin (personal and social responsibility). Another was to understand and appreciate the sacrifices of nisei veterans and those affected by World War II; it is because of those sacrifices that my loyalty as a U.S. citizen is never questioned. And the most recent thing Chinen taught me, relevant to the current pandemic situation, is that “People move the community forward.” When times were hard in the past, whether it was the Spanish flu or World War II, “Life went on in this community,” said Chinen.

One of the values that the Issei brought from Japan and Okinawa for us, their descendants, was the spirit of gambare (hang in there, don’t give up). Perhaps they are looking upon us now, to watch their teachings being put to action. What have we learned from them? It’s our time to make sure they are smiling from above as we gaman and gambaru (try our best through tough times). And hopefully soon we can come out on the other side of this pandemic and say to our ancestors, “Okage sama de, I am what I am because of you.”

So the true celebration of The Hawai‘i Herald in this 40th year of its publication is that we look for inspiration and guidance through our current challenges in those musty old pages of the Herald filled with the history of our Issei, Nisei and Sansei. We must continue to document their lives and lessons, so that future generations can learn from the past and face the future with gambaru.