Based on historical events, “Anshü: Dark Sorrow”is a novel of passion and human triumph in the face of extraordinary adversity, spanning the cane fields of Hawai‘i and the devastation in Hiroshima. A pregnant and unmarried Hilo teenager, Himiko Aoki, finds her Hawai‘i Japanese American identity clashing with Japan’s cultural norms when she is sent to live with relatives in Tökyö in 1941 and becomes trapped there with the outbreak of the war. When America drops the atomic bomb on Hiroshima, Himiko finds herself adapting in unexpected ways to survive.

This excerpt is from the novel’s 31st chapter titled “Hibakusha.” After the atomic bomb has dropped, Himiko, her friend Setsuko and Rev. Seki are coping with the aftermath. Himiko befriends Mikio, a young man, after they were both injured by the atomic blast. But later, Himiko must deliver money and devastating news to Mikio’s mother about her son. 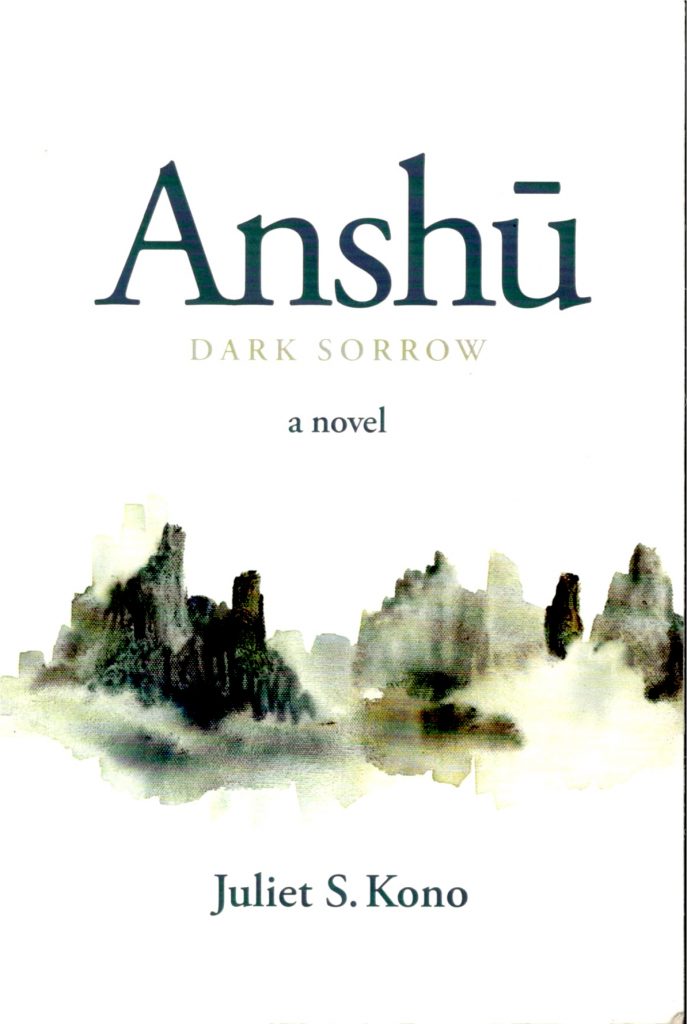 On the way home, I saw the boy who had asked me for money to buy a train ticket. “Hey wait!” I called out. “Why aren’t you on your way to your sister’s?”

The boy, who could not have been more than nine, gave me a look of disgust and laughed from the side of his mouth and with a swing of his head spat on the ground like an adult. “Home? What home? I bought myself some bean cakes,” he said, taking out a toothpick from the bottom of his kimono sleeve to poke at his decayed and crooked teeth. “Stupid lady. What do you take me for? Go away — you, you Hibakusha!” Saliva sprayed in contempt from his mouth.

The word he called me took me by surprise and I rushed after him, wanting to know what that meant. “Don’t you dare touch me,” he said, jumping back when I tried to keep him from running away.

“No one can tell if I was in the bomb,” he said “But you — you are a scar-faced woman. You’ve been branded like a cow. Everyone knows who you are. You carry the mark of the burning devil!” He ran off, his long kimono dragging behind him.

Hibakusha. So now I was Hibakusha, survivor of the atomic bomb. Victim.

When I told Rev. Seki what the boy had called me, he shook his head at the boy’s response, but what he said surprised me. “All of our lives are interdependent, and in a way we are complicit to all that every other human being has done or does in his or her life. Countries at war all carry a heavy karmic debt, the causes and conditions wrought and interwoven in and out of our lives, creating this huge net that had been cast upon us where no one is innocent or exempt. Yet, at the same time, remember, it is not retribution. It is simply random, the way it is. Such-ness.” Everything in life was more complicated than I could ever imagine it to be.

That night, I made a nourishing broth of seaweed and began to feel a bit more settled in my understanding of what had happened. Without much talking Rev. Seki and I slurped the soup I had fattened with tofu and garnished with green onions. The only sounds came from Setsuko who vomited whenever she ate into the wooden bucket placed at her side.

“It’s no good, Himiko,” she said when I helped her into bed, her spirits falling. “I don’t know why you even try to help me. The doctor’s helper says I should drink a lot of fluids, so I drink the fluids but what’s the use? What I drink comes back up. They say I have to rest, too, but don’t they know I’m stuck in this bed by weakness? Kill me, Himiko. I beg you. Save me that way. This is worse than dying.”

I wiped her face and put a wet towel on her forehead and pushed back her tacky hair. Some of it came off in my hands. Dark pimples grew in spots on her scalp.

“You must keep on trying,” I told her. “You have only this one life, this unrepeatable life, as Rev. Seki says.”

Setsuko smiled as I said this. “It’s becoming of you to preach to me. I’m miserable.” Even when she dropped off to sleep, her teeth continued to chatter.

I wanted to take her into my arms, hold her, and console her, but there was no room for this display in our lives. I could only show how much I cared for her in other ways and replicated what they had done to me — the bathing, the wiping, the feeding.

“No matter how hard it is, you have to try. If your body didn’t want to try, it wouldn’t struggle so much,” I scolded. The first days after the bombing, she had been so strong; now she was thin and weak, no different than I was. Looking at her drawn face, I remembered how kind she had been to Sumie.

I continued to improve, my red blood count up, so one day I caught the train to Mukaihara in search of Mikio’s mother. It was a tiny place in a wooded but tranquil area about an hour or so by bus from the rim of the blast in the city. The house sat sturdy as a daruma doll in a wide but shady grove, a window for one eye. I liked it at once.

I knocked on the cottage door. A woman opened the door, peered through the crack, and stared at me. “Hello, my name is Aoki Himiko,” I said to the eyes.

She stared at my ruined face without embarrassment. “Do I know you?”

“I met your son right after the bomb hit. I promised him I would come to see you should I live through my ordeal.”

She opened the door wide and showed me in. The woman was almost doll-like in how fair and small she was.

As we drank tea in the dark, quiet house, I passed her his glasses and the money that Mikio had given me before he died.

She took the glasses but rejected the money with a shake of her head.

“Mikio wanted you to have it. Take it in his memory,” I finally persuaded her to take the envelope. She reached out, took it from my hand, and placed it on her chest, while murmuring her thanks.

“Did Mikio suffer? Was he badly injured?”

I lied and said that he died in a matter of minutes. I didn’t tell her how badly burned his back had been. She didn’t need to know the details.

“His face remained untouched,” I said. “Don’t be unhappy about his death. He was dying for the emperor and his cause. It was something he wanted to do. He died peacefully.”

“Was he burned badly?”

“It’s difficult to say. Like so many others he got ill from the light.”

“The bomb was powerful, I hear. He must have been in pain.”

“If Mikio was in pain, he didn’t show it. He was very brave.”

“I’m glad he died quickly. I’ve been hearing about this dreadful illness, but the newspapers say very little.”

I asked her about Mikio’s life, and what I found was that he lived such an ordinary, filial life that it filled me with a special sadness because it could have been so complete.

“How powerless most people are in time of war. We really can’t control what happens to us. It will be lonely for me now that he’s gone,” she said.

Before leaving Mikio’s home, I offered incense, placed white chrysanthemums in front of the serious face of his photograph on the family altar, and rang the bell in reverence of his short life.