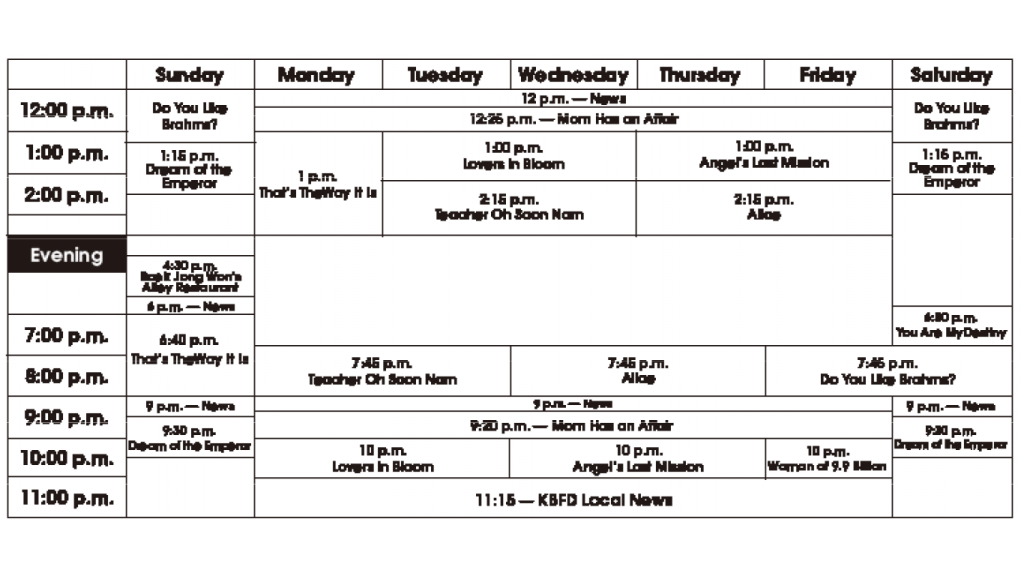 Dan — an optimistic, if troublemaking, angel — has been assigned to aid ballerina Yeon-Seo, who does not believe in love. If Dan succeeds in his mission to find her true love, he can return to heaven. The problem: Dan has fallen in love with Yeon-Seo.

Seo-Yeon Jeong unexpectedly acquires 9.9 billion won (US $9 million) — but her life always seems to pit her against the world. Her father had behaved violently against their family, so she left that home to start a new life with an affectionate boyfriend. But even that happy phase ended. As Seo-Yeon Jeong strives to find some joy, she meets Tae-Woo Kang, an ex-detective investigating the death of his younger sibling.

In this drama, Soon-Nam Oh, a private-village school teacher, loves her job which lets her inspire students and help them grow, and she also loves her daughter Joon-Young Oh. However, in a twist of fate, she loses both the school and her child. Though devastated, she chooses to protect children’s dreams, following her daughter’s dream, rather than give in to revenge impulses.

Since her father left home and her mother passed away, Pil-Jung has cared for her younger sister. She marries Tae-Sub, a single dad with a child; however, Tae-Sub goes bankrupt, causes trouble for their family, then dies. Seven years later, as a happy single mom, Pil-Jung works odd jobs to support the children — who want a rich, cool new dad.

In an investigation, stoic Det. Jin-Gyeom Park learns that time travelers arrive from the future to the present through a space called “Alice.” Fighting time travel’s negative effects, Jin-Gyeon Park meets Tae-Yi Yoon, a genius physicist who died in the past. Together, they unravel the secrets of time travel and “Alice.”

Stories of music majors at a prestigious university such as pianist Joon-Young and Song-Ah Chae, a fourth-year student training as a violinist.

Historical drama on the rise of Shilla, one of Korea’s Three Kingdoms. Future King Taejong Muyeol (born Choon-Choo Kim), along with general Yoo-Shin Kim, brings about the golden age of the Shilla Dynasty.

Family in a three-generation household face challenges and conflicts together.

“Lovers in Bloom,” Monday and Tuesday at 10 p.m.; re-airs on Tuesday and Wednesday at 1 pm.

In a neighborhood police station, various characters intersect, such as ex-boxer Goong-Hwa Moo, who raised her daughter as a single parent, and justice-driven Tae-Jin Cha, an elite officer trained at the police university.

Chipper and optimistic orphan Sae-Byeok Jang changes her life upon getting a corneal transplant from Na-Yeong. To thank her late donor’s family, Sae-Byeok Jang visits them, but finds that Na- Yeong’s parents did not know their daughter died. But she soon grows close to the dead girl’s parents.