“The Three-Year Swim Club: The Untold Story of Maui’s Sugar Ditch Kids and Their Quest for Olympic Glory” (Grand Central Publishing, 2015) is a feel-good inspiring underdog story, in a “Karate Kid” kind of way. It’s about the life of Soichi Sakamoto, a Pu‘unënë school teacher who taught poverty-stricken children of sugar-plantation workers to swim. Instead of “Wax on, wax off,” his athletes built strength carrying pails full of water on the ends of rods; instead of “Sand the floor,” they swam in a plantation irrigation ditch. The goal: the Olympics. 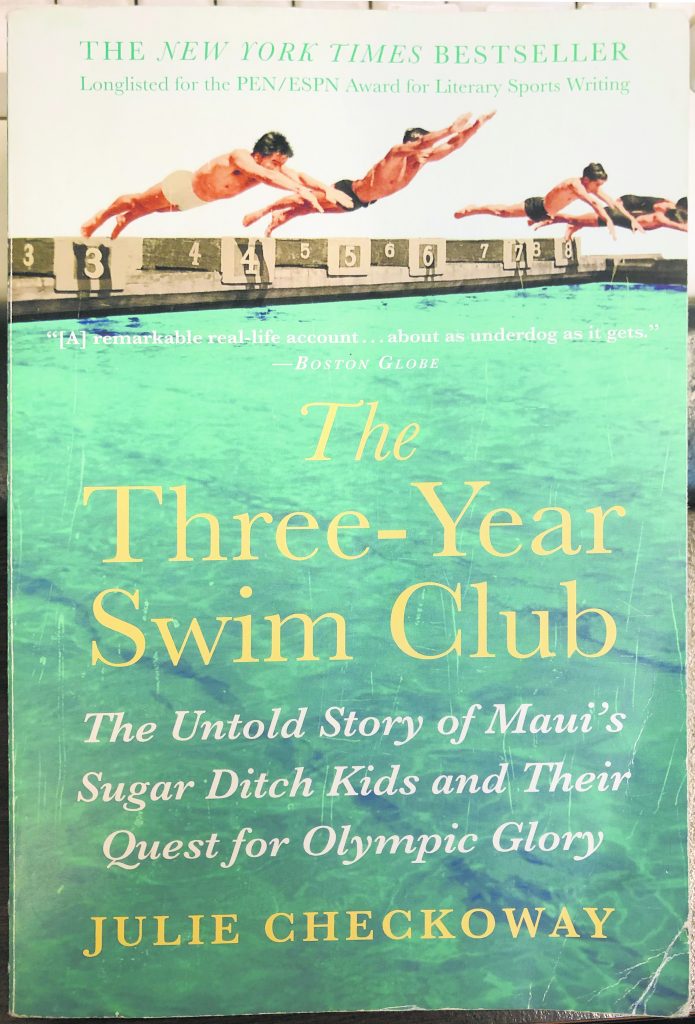 Checkoway wrote the 346-page New York Times bestseller, the story was told in a play by Hawai‘i writer Lee Tonouchi in 2011. The book has been popular with book clubs and was recently part of Maui’s Nisei Veterans Memorial Center’s “An Afternoon With The Author Series.” The story had developed a following, and that piqued my curiosity and gave me hope that more literature about Hawai‘i’s rich ethnic untold history will make it into mainstream literature.

Checkoway’s exhaustive research on the inspiring tale is evident in how accurately she describes plantation culture and life, world events and prejudice Japanese and Okinawan Americans faced in the late 1930s to early 1940s.

In the book, the journey begins from Soichi Sakamoto’s birth in 1906, the Year of the Fire Horse. As a child, Soichi was not the typical obedient nisei boy. And Checkoway appropriately titles Chapter Two “HARDHEAD,” which describes young Soichi as “impatient,” “impulsive” and “rebellious,” foreshadowing how, as an adult, he “discovered how to turn a reflex into reflection, and defiance into daring.”

Soichi’s parents expected their six children to learn Japanese and marry their own kind. He was known to wander to hidden streams watching mosquitoes and snails. His grades were not the best, but he taught himself to play musical instruments and speak Hawaiian. After barely graduating from Maui High School, primarily due to illness, he attended the Territorial Normal School in Honolulu, and was assigned a teaching position back in Maui at Pu‘unënë camp. It wasn’t his dream job. Checkoway writes:

After teaching at Pu‘unënë for several months, Soichi Sakamoto was still wretched. His colleagues found him sullen, difficult. He lived at home, under his parents’ roof and watchful eye. By Christmas 1928 he felt himself adrift, desperate for anything to come along to give him meaning. School was out; one night during the holidays he had a job playing music at a wedding. His parents were away in Japan on a business trip, and both their absence and the chance to play some music were welcome things, but the night turned out to be disastrous. The band was supposed to be a quartet, but only Sakamoto and one other musician showed, and though the two of them tried their best to liven up the party, the night was over early, and Sakamoto drove, miserable, toward home.

That was the fateful night Soichi met his wife.

In Kahului, a harbor town not far from Wailuku, a building was lit up and, instinctually, he drove toward it. From outside he heard music, and when he peered in the door, he found a hall of revelers. Shy with girls and a dead-hoofer dancer, he thought to leave, but across the room, he saw one he had seen years before, when his parents made him work a summer in a pineapple cannery, sticking label after label onto tin cans; another time he saw her walking on the roadside with a group of friends.

She was Hawaiian through and through, her hair a mass of dark, shining ringlets. Her name was Mary Kalaaupa Po‘o pa‘a …

Yes, she told him, she did love music; yes, she loved to sing, she said, and she played ‘ukulele.

He played as well, and the steel guitar, he offered.

And he spoke Hawaiian? How unusual. She spoke Japanese. How funny.

As much as he had been searching the world for a sign of his life’s purpose, he realized he had been as much in search of someone who would help him find it. He knew instantly now that this girl, Mary Kalaaupa Po‘o pa‘a, was the one to help guide him … he knew that his brazenness was because now, something greater than he — it might be god; it might be fate — spoke through him, and he stood at the start of a road on which he knew he’d find his life’s path.

Checkoway’s portrayal of Mary is about her dedication to the success of Soichi. Although Soichi was an unusual nisei man who loved Hawaiian culture, the Sakamoto family household was “old-school Japanese.” Checkoway illustrates his samurai character saying, “Coach did nothing around the house; he barely spoke to his children or to Mary. And Mary bore the weight of everything. Mary did the housework, she drew the furo for her husband and had his dinner ready, even when he came home late.”

Eventually, Mary would also help coach on Maui while Soichi was away; she also did her best to fight for the girls’ swim team during a time when discrimination against women was palpable.

Going for “The Gold” and “Go For Broke”

In addition to Soichi and Mary’s unlikely marriage, the story continues to unfold in a fortuitous way. For example, Soichi’s life changed when his parents made a “last attempt to turn their son around.” Soichi’s father offered him an opportunity to spend a summer in Japan. Though he was married with one child, he could not resist. Since the trip was sponsored by the Maui Boy Scouts, in order to participate, he had to earn the rank of Eagle Scout — at age 24. He earned all the required badges with determination, including the one he barely achieved, the swimming badge. It was this experience that forced him to swim, go to Japan and learn about the Olympics. From then, Soichi’s path would stray from the hopes of his parents.

Soichi started watching over kids who wanted to play in the plantation irrigation ditches after school. This turned into teaching them how to move and stay afloat in the water, then how to swim. Checkoway’s website describes what an extraordinary effort he had undertaken (juliecheckoway.com/book):

… The children were Japanese American, were malnourished and barefoot and had no pool; they trained in the filthy irrigation ditches that snaked down from the mountains into the sugarcane fields. Their future was in those same fields, working alongside their parents in virtual slavery, known not by their names but by numbered tags that hung around their necks. Their teacher, Soichi Sakamoto, was an ordinary man whose swimming ability didn’t extend much beyond treading water.

In 1937, Soichi took the after-school activity to the next level and officially organized the 3YSC with the goal of going to the 1940 Olympics in Tokyo. Children who signed up committed themselves to “Three years of discipling. Three years of sacrifice. Three years of nothing except swimming. Only swimming.”

That first year, 1937, Soichi matched his best swimmers, starting with Keo Nakama and Takashi “Halo” Hirose, against other Olympic athletes twice their size. In 1938, they became world-class swimmers, breaking records nationally and internationally. By the third year, they would be the best in the world; however, World War II was on the horizon. Many of these young men would go from being the world’s best swimmers, to the world’s Greatest Generation, serving as soldiers in World War II. 1948 would be their last chance to go for “The Gold.” In her notes, Checkoway notes that the foundation of Soichi’s training and wisdom was the notion of “steady-steady,” a work style which he had learned from local fieldworkers. They needed to labor at a sustained pace in order to keep working every day without giving in to despair or exhaustion. That’s how his boys became world-class swimmers; that’s how they endured war; that’s how 40-year-old Keo Nakama would one day swim across the Kaiwi Channel.

There’s More to the Story

Though not everyone likes to read the stuff that follows the last chapter of a story, I found it a lot of fun to go through the back, which includes a treasure trove of information. Checkoway expands on what happened to some of the key members of the 3YSC after the 1948 Olympics. This part includes notes on each chapter: what it was like to hunt down information for research, including a reading-group guide for those who want to jump down the 3YSC rabbit hole after reading the story, which could be helpful for young readers and their teachers or parents.

If you are looking for a feel-good story — because we could really use that right now — or want to root for the sugar-plantation kids of Old Maui, this is a good one. However, I should warn you that there are moments where I felt Checkoway had packed in too many stats about times and distances of all the swimmers; it was hard to keep track of something that didn’t have much to do with the inspiring parts of the story. I found some parts a little tedious, but I stuck with the reading because I wanted to cheer on the 3YSC — “Olympics First! Olympics Always!”