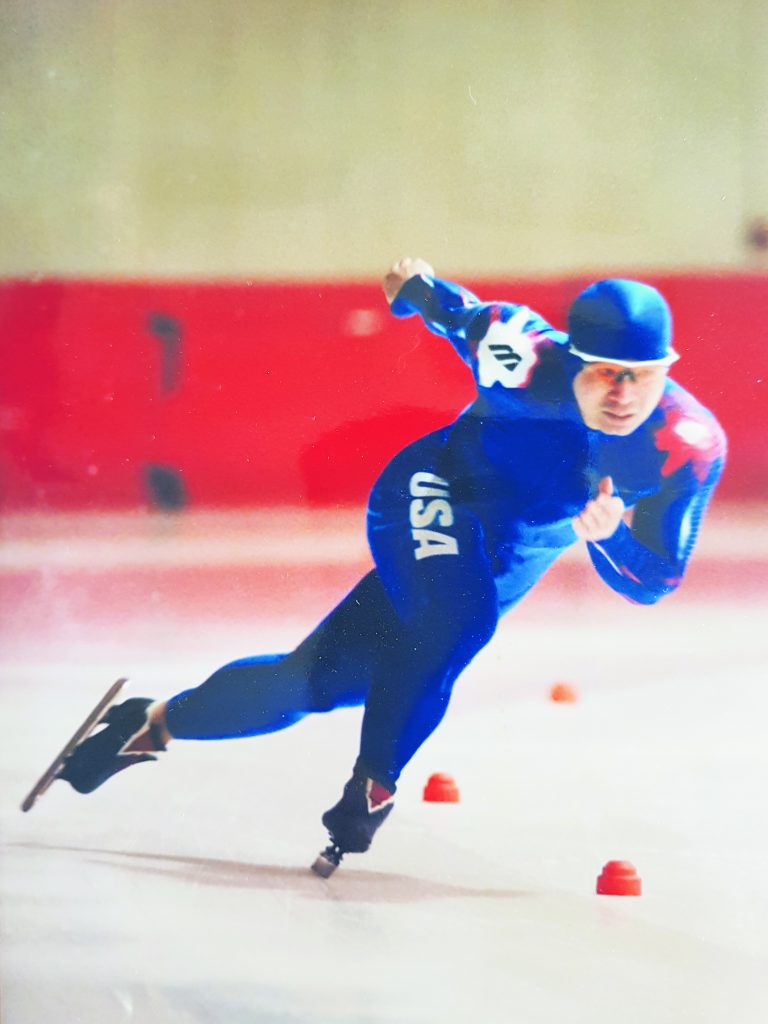 While in lockdown, people in Hawai‘i are experiencing the physical and economic challenges of COVID-19. I thought about how the postponement of the 2020 Olympics in Tökyö would impact Japan. Then I remembered my childhood friend, former Olympic-hopeful speedskater Ryan Shimabukuro, whom I hadn’t seen for many years. I wondered how he was doing.

I first met Shimabukuro about four decades ago, when we were in elementary school. His Okinawan roots, reflected in that last name, come from his great-grandfather who hails from the former Gushikawa/Ishikawa (currently Uruma-shi) and his great-grandmother from Nishihara.

One day, while I was playing with a couple of friends in Wahiawä, I noticed a younger kid riding his bike. He was by himself, so I invited him to join us. Every weekend, Shimabukuro visited his grandparents who lived down the street from my house. He didn’t have any playmates until my friends and I came along. Shimabukuro and I clicked, and before I knew it, we were biking all over together. We used clothespins to hold playing cards in the spokes which created a motorcycle-sound the faster we pedaled; we jumped the curb, or “the ramp,” by his grandparents’; then we slammed on the brakes to see who could skid the longest.

We watched all the army movies back then, after which we ran around and hid in the grass pretending to be soldiers. I used to think of Shimabukuro as a cool guy, because he knew how to do popping and breakdance moves. More than remembering him today as one of the U.S. Olympic speedskating team coaches, I see him as the guy who taught me how to moonwalk and do “scissors” moves. Now I would definitely injure myself if I try to do a backspin around again on cardboard, like we used to try at his grandparents’ house, but perhaps I could copy Michael Jackson if I’m wearing socks on a smooth wooden floor.

Shimabukuro and I spent almost every weekend playing together. We had lots of fun in the early ‘80s watching cartoons. And his grandfather dropped us off at the Wahiawa Shopping Center where we could play video games inside of Foodland grocery store. I also remember his family inviting me to his oldest sister’s “Sweet 16” birthday party in Salt Lake. As close as we were, though, normal life events took us in different directions. I finished Kaʻala Elementary School and started attending Wahiawä Intermediate School, and Shimabukuro, a couple of years younger than me, began learning how to speedskate at the Ice Palace near Aloha Stadium.

His initial spark to undertake such a sport began while watching the 1980 Winter Olympics, held in New York, together with his father from their Kalihi home. Shimabukuro watched Eric Heiden, dressed in his skate suit, speeding on the ice and taking an unprecedented five gold medals.

An outing to Ice Palace after a gathering at Chuck E. Cheese in 1985 fanned that spark. Shimabukuro had to accompany family and friends there, since he was below the driving age as a Moanalua Intermediate School student and had no choice but to follow them from the restaurant to the rink. He grew to love being on the ice.

Shimabukuro trained for four to five hours on Saturdays and delivered the Honolulu Star-Bulletin newspaper to help pay for his skating equipment, lessons and training camps. Today, a large picture of the “Flyin’ Hawaiian” is still on display at Ice Palace. I remember that nickname from when he appeared on the television show “Hawaii’s Super Kids” hosted by Andy Bumatai twice in 1987 and “The Hawaiian Moving Company” hosted by Michael W. Perry in 1993.

Shimabukuro grew more serious about speedskating, so he moved to Marquette, Michigan, in January 1989 to train for six months while continuing his sophomore year of high school and while I finished up my time at Leilehua. After a brief return home to Hawai‘i, Shimabukuro and his parents moved to Wisconsin, where he graduated from Waukesha North High School in 1991 and earned a position on the National Junior Long Track Team. He started trying out for the Olympics in 1992 and 1994, then skated again in the first week of the U.S. Olympic Trials in 1998 while working at a Bally Total Fitness Gym as a personal trainer from 1994 to 1997.

Falling ill to pneumonia, Shimabukuro couldn’t continue into the second week of the Olympic Trials, making the heartbreaking decision to hang up his skates rather than go through another four years of hard work while putting his parents and supporters through more financial and emotional challenges.

His plans to return to Hawai‘i came to a halt within a month, though, as 11 skaters requested him as their personal coach. He became the Midwest Regional Development coach for U.S. Speedskating until 2002. His experience there led to an opportunity to become the National Sprint Team coach for the next 12 years in Utah. A short stint as the Japanese National Team coach from 2014 to 2015 ended prematurely due to unforeseen circumstances, so Shimabukuro returned to Utah.

He continued teaching skaters from different nations: two athletes from Chinese Taipei, two from Colombia and one American for the 2018 Winter Olympics in Pyeong Chang, which he attended under the Colombian banner. He currently serves in his former position as the U.S. National Sprint Team coach for U.S. Speedskating. In all, he has trained numerous skaters who collectively obtained a total of four Olympic medals (two gold and two silver), three World Sprint Championship titles and five world records.

After I graduated from the University of Hawai‘i and arrived in Okinawa in 1994, Shimabukuro and I first communicated through written letters as e-mail was just developing back then. But over time, we lost touch with each other. Once, though, I heard about him while helping my oyakata (pottery master) friend at an annual festival at Yachimun No Sato in Yomitan. I saw an American guy walk into my oyakata’s studio, and we struck up a conversation around the fireplace. After seeing the Olympic logo on his jacket, I asked if he knew Ryan Shimabukuro. It turns out that John Hill was the athletic trainer for the 2002 Winter Olympics speedskating team.

Later, while performing Air Force Reserve duty at Yokota Air Base on the outskirts of Tökyö in 2010, I started watching American television shows that didn’t air back home in Okinawa, from my billeting room. One day, “The Colbert Report” came on with a spoof of the host trying out for the U.S. Olympic speedskating team, since the Winter Olympics were being held that year. I thought the coach looked familiar — sure enough, it was my childhood friend! I had already started using Facebook, so I immediately looked him up. Thanks to modern technology, we reconnected.

During my last round of Air Force Reserve duty at Yokota Air Base in 2015, I checked my Facebook newsfeed and noticed that Shimabukuro posted that he was in Japan coaching their team. I contacted him, and we scheduled a meeting a few days later in downtown Tökyö. After initially meeting up in Shinagawa, we jumped in a taxi and headed to Ogo’s Onoloa Hawaiian Restaurant in Akasaka owned by ‘Aiea High School graduate, Ryoji Soranaka, who was from Japan. There we were, two childhood friends from Hawai‘i catching up on stories from over the past 30-plus years. Seeing each other over our Hawaiian dinner plates, in the middle of Japan, I believe our body weight might have changed from how it was back in our childhood, but the pidgin English didn’t.

To gather details for this article, I had only planned an hour or two of video-chat time to catch up with my childhood friend. But we ended up talking and laughing for five hours, recounting endless memories of the “hanabata” days! This was only the second time we’ve conversed in three and a half decades. Many years have passed, but we picked up where we left off as if it were yesterday.

As we reflected upon our current lives, we credited the Aloha spirit and the foundational values impressed upon us growing up in Hawai‘i. Although he hasn’t been to Okinawa, Shimabukuro said he would love to visit and connect with his roots. It would be neat to see the Flyin’ Hawaiian one day on skates at the Southern Hill Sports World in Haebaru, Okinawa. My wife Keiko and I used to take our kids there; it reminds me of the Ice Palace in Hawai‘i . Perhaps one day I will see this friend from my youth fly on ice, reliving the old days when I pedaled my bike up to his to invite him to play.

Colin Sewake is a keiki o ka ‘äina from Wahiawä, who was assigned to Kadena Air Base in Okinawa in December 1994 to fulfill his U.S. Air Force ROTC commitment. There, he met his wife, Keiko, and decided to make Okinawa his permanent home. Colin is now retired from the Air Force and the Air Force Reserves. He and Keiko have two children and live in Yomitan.