By Byrnes Yamashita
Special to The Hawai‘i Herald

Do you sometimes think about how a simple twist of fate changed your life and the lives of others? As the world commemorates the 75th anniversary of the end of World War II in 2020, the people of Okinawa observe Irei no Hi or “Okinawa’s Memorial Day” on June 23 (June 22 in Hawai’i), to reflect on a life-changing wartime experience.

“Irei no Hi,” which translates to “the day to console the dead,” is an annual remembrance observed in Japan’s Okinawa Prefecture to memorialize the lives lost during the Battle of Okinawa.

The Battle of Okinawa was the only ground engagement of the Pacific War fought on Japanese soil. The Japanese Imperial Army and U.S. military forces clashed upon Okinawan land and water. Over 240,000 lives were lost (about half of those Okinawan civilians); numerous buildings on the island were destroyed along with countless historical documents, artifacts and cultural treasures. This destruction included many family registries or köseki, which now makes it difficult for Okinawan descendants living outside of Okinawa to connect with their relatives who live there.

The names of the over 240,000 people who lost their lives are inscribed on the Cornerstone of Peace Monument in the Mabuni area of southern Okinawa where the Irei no Hi ceremony is held each year.

On that historic day, April 29, 1945, Shinye Gima, a nisei from Hawai‘i, landed in Yomitan, Okinawa, with U.S. troops. What twist of fate had brought him to his parents’ homeland?

Shinye was born in 1925 in Pu‘uloa, Ewa Plantation, O’ahu, but grew up on Maui. He was the second of 10 children of Shinyu and Ushi Gima, immigrants from Tamagusuku-son, Okinawa.

He grew up in Kahului, the son of a stevedore who, despite his small frame, proved strong enough to haul 96-lb. bags of raw sugar into the holds of ships. His mother made tofu to sell to the neighbors.

In the book, “The Japanese American Historical Experience in Hawai‘i” by Jonathan Y. Okamura, Yukiko Kimura quotes Mrs. Ushi Gima: “For 15 years, I made tofu. Every morning, I got up at 2 [a.m.] to start making it. I also raised hogs. In the afternoon, I washed clothes of single men in the camp. I also taught dressmaking to young girls.”

Today, Dr. Shinye Gima is a healthy and spry 95-year-old blessed with his parents’ genes and work ethic. When Shinye was eight years old, his family received a letter from his paternal grandparents in Okinawa. He recalls that they had no blood relatives to live with them, so they asked his father to send them one of his sons.

Shinye says, “Naturally with Ralph being the oldest sibling, my father wouldn’t send him, so my father asked me, ‘Eh you want to go to Okinawa to live with your grandparents?’ I said, ‘Oh no, I have a lot of friends in school. I don’t want to leave my friends.’ My younger brother Noboru said, ‘Oh, I’ll go.’ He was 5 years old. He had no idea what he was getting into. My father took him to Okinawa, [it was] about 1933.”

These two young boys were unaware of how this decision would change the arc of their lives. On Dec. 7, 1941, Shinye was a junior at Baldwin High School. He remembers that the school was immediately closed after the Japanese attack on Pearl Harbor and then re-opened a few months later.

As a senior, Shinye was among hundreds of nisei that went to Wailuku Gym to volunteer for the 442nd Regimental Combat Team in February 1943. However, he was rejected due to his poor eyesight.

In the fall, he enrolled at the University of Hawai‘i. Later that year, recruiters for the Military Intelligence Service visited the campus seeking AJA volunteers. He took the qualification exam and was accepted.

In February 1944, he and 300 other volunteers from Hawai‘i arrived at Camp Savage, Minn., to attend the MIS Language School. The school was moved to Fort Snelling in the spring of 1944. After completing nine months of language training, he attended basic training at Fort McClellan, Ala., and returned to Fort Snelling to await his assignment.

The Army had approved the formation of a special group of linguists who could speak the Okinawan dialect; Shinye was selected as part of the 10-man 308th Intelligence Detachment sent to Okinawa while the battle, also known as the “Typhoon of Steel,” was raging.

Upon their arrival on Okinawa, individual unit members were assigned to other units on temporary duty. While the Army and Marines were fighting the land battle against the Japanese army, the Navy was assigned to control the Okinawan civilian community, having completed its bombardment and landing operations for the most part.

Initially assigned to a Navy medical unit on the island of Kumejima, Shinye was impressed by the Navy’s humanitarian efforts in support of the Okinawan citizens amidst the war. He was later transferred to an Army unit that attempted to persuade a “hold-out” Japanese naval detachment to surrender.

After the Japanese surrendered in September 1945, Shinye returned to the main island of Okinawa from Kumejima to search for his relatives. He was able to find his grandparents who had been relocated from their home in Tamagusuku to an evacuation center further north.

Eventually, Shinye’s relatives in Okinawa could return to their home, but they did not know what had happened to Noboru; Shinye continued his search for his brother. Noboru was about 16 or 17 years old when the U.S. military attack on Okinawa began. Noboru had volunteered for a high-school group called Tekketsu Kinnotai — “Blood-and-Steel Imperial Corps.” These groups of high-school students provided logistical support to the Japanese army. Noboru was captured by the Americans.

Shinye learned that Noboru had been sent to a POW camp in Hawai‘i. He notified his parents of Noboru’s plight and advised them to pursue his release, since he was an American citizen.

It took a year, but Noboru was released in 1946 and allowed to return home to Maui. Homesick for Okinawa, he took English lessons and enlisted in the U.S. Army, which still needed linguists. He also worked for military intelligence while serving in the Army in Okinawa for many years. After retiring from the Army, he then found civilian work, in Okinawa, employed by the U.S. Army and Navy. He married an Okinawan girl; they had a son, David, who currently lives in Hawai‘i. 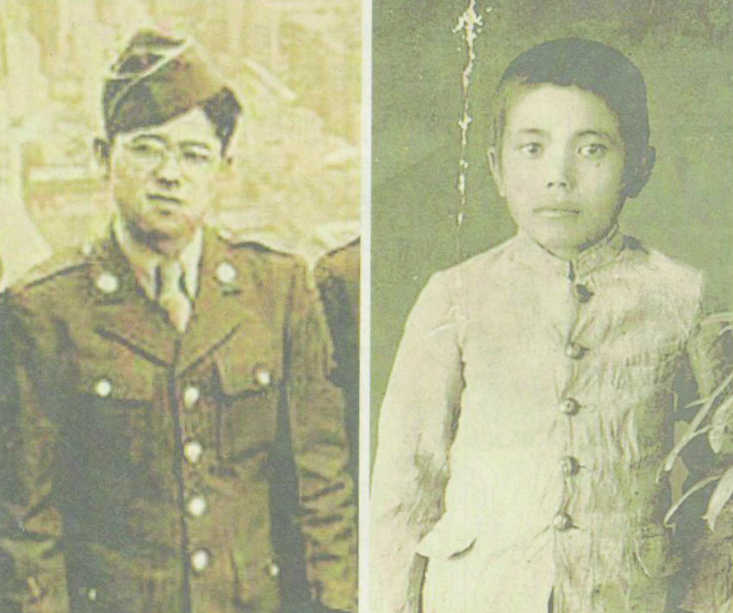 After service to both countries in his lifetime, Noboru passed away in 2017 at the age of 89.

In the spring of 1946, Noboru’s brother Shinye returned to Hawai‘i upon his discharge from the Army. He completed a teaching degree from the University of Hawai‘i and instructed public-school students for several years. He then earned a Ph.D. in educational psychology and worked as faculty in audio-visual technology and instructional design at the UH College of Education until his retirement.

As we honor the memory of the many people who lost their lives during the Battle of Okinawa on both sides of the war, we can marvel at this story of one family with roots in Hawai‘i and Okinawa; how a simple decision changed the lives of two brothers who had very different experiences during the Battle.

Dr. Shinye Gima thinks that if he had accepted his father’s offer to go to Okinawa, being three years older than Noboru, he would have been of draft age and probably would have entered the Japanese Imperial Army and probably been killed. And Hawai‘i would have lost an educator who spent almost 40 years serving the community. Something to ponder, isn’t it?

Byrnes Yamashita is a retired engineer and volunteers for the Nisei Veterans Legacy, a non-profit organization that preserves and promulgates the contributions of the Nisei soldiers of World War II.