“WHEREAS, hard-working, determined, passionate, and talented are words that describe Trysen ‘TK’ Kaneshige, in his journey towards an auspicious career in the creative arts as a local Kaua‘i boy with a simple, but in no way small, dream …” reads the first line of the proclamation presented to Kaneshige last year by Mayor Derek Kawakami on Feb. 19 at Kapa‘a High School. But Kaneshige’s story also has elements of darkness, healing, brotherhood and community.

The 25-year-old yonsei, known as “TKay2,” is a multimedia artist whose vibrant murals featuring positive messages can be seen all over the state. He found his calling after suffering a concussion from playing soccer in 2013. Brain trauma caused him to suffer from hearing sounds in his head, and not being able to play soccer led to depression and thoughts of suicide. So, Kaneshige turned to art for healing.

Around that time, he met multimedia artist Ken “East” Nishimura, or “East3,” who had flown in from Honolulu to do a summer workshop. Nishimura is also the founder and director of Keep It Flowing — a business that partners with various organizations, including the government, and aims at “providing key messages like drug-prevention, anti-bullying and keiki empowerment to the community of Hawai‘i and beyond” — for which Kaneshige is a lead artist. 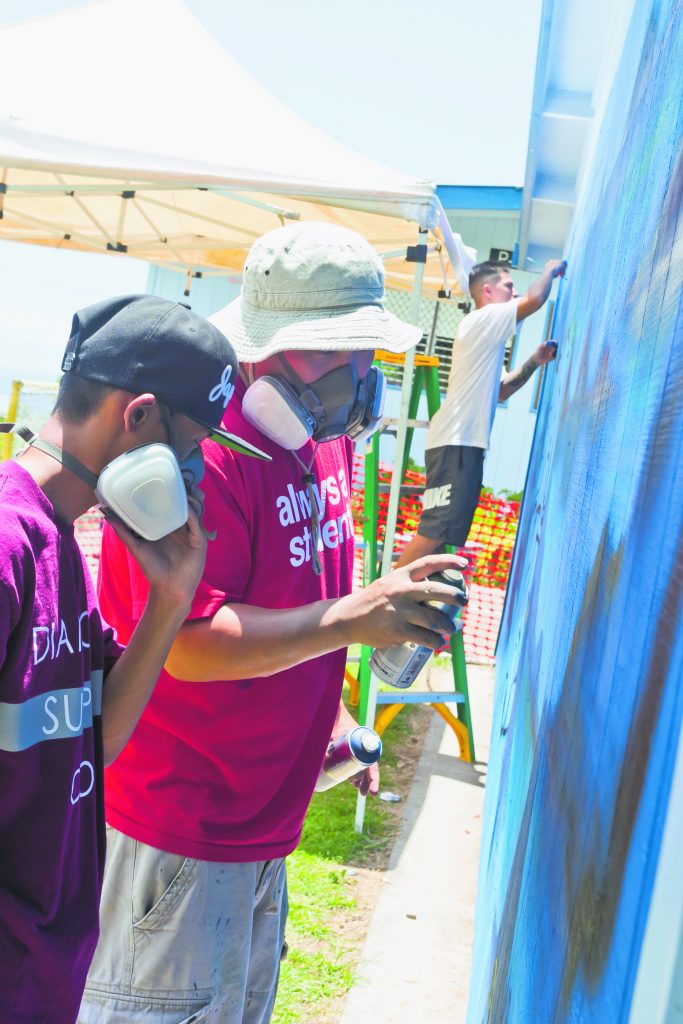 The catalyst for Kaneshige’s passion for art was the “Believe In Your Dreams  and Spray Away Meth” workshop at Kaua‘i High School. Through the Hawaii Meth Project, Kaneshige helped to carry out a workshop created to let young people express themselves through art and bring awareness to the dangers of methamphetamines, or “meth.” Kaneshige’s teacher at Kaua‘i High, Leah Aiwohi, was the project’s advisor. He also worked with other artists on the project: mentor Nishimura from Honolulu, Rasone from Las Vegas, and Jason Medeiros from Kaua‘i. And that was just the beginning …

Kaneshige’s mentor, Nishimura, said that he started with hip-hop culture as a foundation. In the ‘80s and ‘90s, Nishimura produced street art, or writing, in places like New York City, Abu Dhabi, Guam and Japan.

“We never say the ‘g-word,’” said Nishimura. The word “graffiti” was for “the people who were trying to stop the vandalism [and] label it a crime.” Street art is a culture and an art form, not a crime, he believes. Nishimura feels the most important aspect of any art is the energy that comes out of the artist.

At first, Nishimura taught Kaneshige about art, as well as how to make it a sustainable business. He advised the Kaua‘i artist that keeping track of  income and expenses and paying taxes are equally important when considering art as a career.

Because mentor and student live on two different islands, Nishimura advised Kaneshige by phone or email.

Recently, their bond has been made stronger because Nishimura has been struggling with a disability, or more specifically, benign paroxysmal positional vertigo. Similar to Kaneshige, he experienced emotional frustrations which affected his ability to do street art. His doctor told Nishimura that there was nothing he could do about his BPPV, and suddenly he became empathetic to Kaneshige’s struggles.

Nishimura did not give up; he sought out alternative options to help him overcome BPPV, with the help of Dr. Chad Sato of Aloha Chiropractic who specializes in blood flow, the nervous system and mental and emotional stress.

Now Kaneshige and Nishimura share a journey toward healing and wellness while inspiring others to do the same. 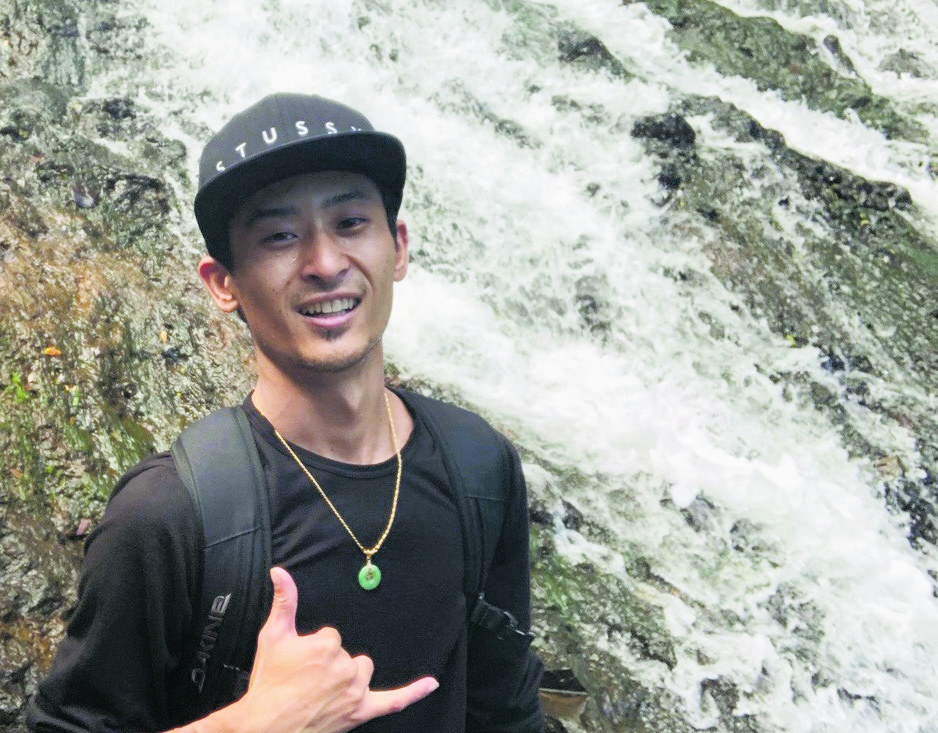 Although Kaneshige has bragging rights to being commissioned by world-renowned companies such as Volcom, Olukai and Deja Vu Surf, his heart lies in community-based projects.

After completing the “Believe in Your Dreams” workshop, Kaneshige went on to tour with the “Not Even Once” anti-meth campaign which helped him put up vibrant messages on massive walls across the state including O‘ahu, Maui, Lana‘i and Hawai‘i Island. It was that tour that earned him his first proclamation from Mayor Bernard Carvalho in 2014.

Kaneshige also gives back through the Kauai Mental Health Advocates. “I wanted to do an art show to heal myself and other people,” he said. KMHA held an art show last year as an opportunity for people to come and have an open dialogue about mental health and wellness in a creative and interactive format.

Kaneshige’s influence on today’s youth is so impactful because of his diverse skill set which includes music and video-editing, photography and graphic design.

For the COVID-19 pandemic, Kaneshige designed a facemask for O‘ahu based Xtreme Imprint. “The mask I designed is part of a collection made by Xtreme Imprint Hawaii (https://www.xtremeimprinthawaii.com/) and, for every mask sold, [we] are donating one mask to the frontline [essential workers like medical and police]. I like to paint waves and sunsets so I painted a sunset wave for the mask design. The reason why I am doing the collaboration is to give back to the community, as every mask is hand made on O‘ahu from printing the design to the actual making of the product,” said Kaneshige.

Kaneshige’s future looks bright with many more years ahead to live out his dreams. So take his advice and “Believe in your dreams.”

To learn more about Kaneshige’s work and involvement in the community, visit his website www.tkaytwodesign.com. 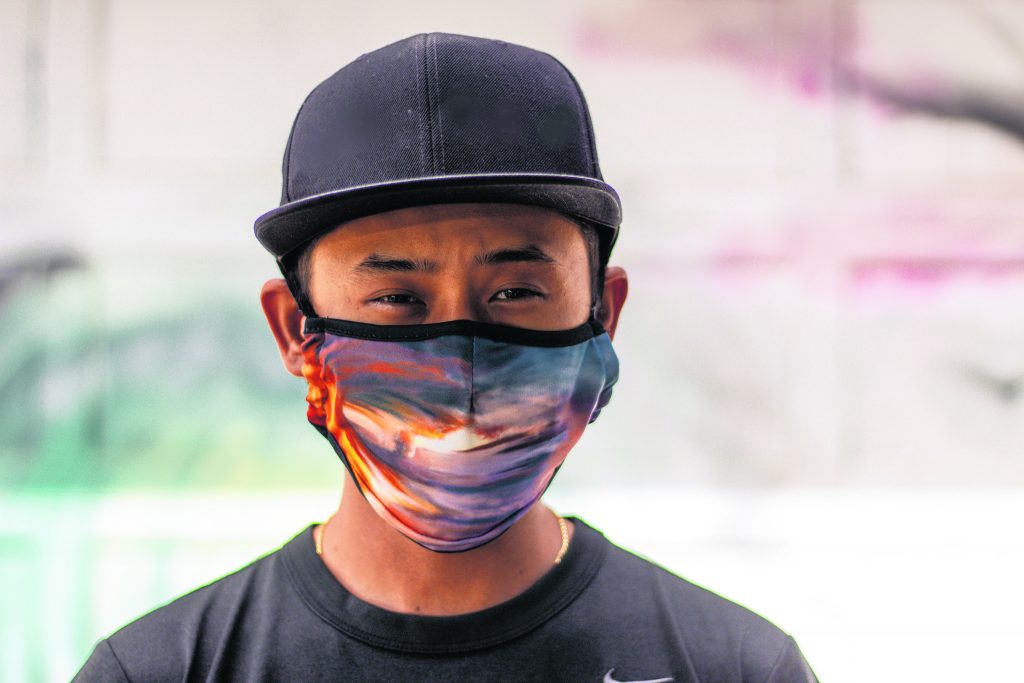