Young Students Learn to Be Mindful In A Fast-Moving World

The tradition of Chadö, or the Way of Tea, is a practice of cultivating harmony, respect, purity and tranquility. These are universal principles that can help ease some of the anxiety caused by the COVID-19 pandemic.

Last fall, I visited a children’s tea class at the Honolulu Myohoji Mission in Nu‘uanu, and learned how chadö gives young people tools to help them navigate through their world filled with technology, instant gratification, climate change and, now, a pandemic.

There are three instructors: Marilyn Naka teaches the beginners and Misako Kurokawa and Diane Kishimoto teach the intermediate and advanced levels. All volunteer teachers are Urasenke certified tea instructors.

Middle school students in the class included Kenjiro Otake, an eighth grader at ‘Iolani and Cora Saito, a seventh grader at Punahou.

How the Children’s Tea Class Began

Back in 2001, when now retired Naka was an elementary school teacher at ‘Iolani School, Celeste O’Brien — lower school assistant dean — asked the teachers to teach a hobby, sport or interest they enjoyed as an after-school class. So, Naka started a tea club that met twice a month four an hour on Wednesdays.

The school librarian, Misako Kurokawa, who also practiced tea with Naka became a co-instructor for the tea class. A month later, at the ‘Iolani Tea Club’s first meeting, there were 18 students ranging from first through fifth grade. In 2013, Naka retired and the club disbanded.

“Soon after, however, a group of former students who were now in middle and high school expressed a desire to continue their study of tea,” said Naka.

In 2014, the Urasenke Foundation allowed Naka and Kurokawa to teach classes in the Seikoan teahouse at the Japanese Cultural Center of Hawai‘i on Sunday afternoons.

In 2017, the class moved to its current location at the Honolulu Myohoji Mission. It was a win-win agreement since the church’s leadership wanted the community to use the tea room more often in exchange for a monetary donation.

“It was important to keep the tuition low and manageable for families,” said Naka. Myohoji also has a collection of tea utensils which the teachers supplement with their own.

What Happens In Class

The youngest students begin around second grade. For these 7-year-olds, a lot of the fun comes from dressing up and eating sweets. Before the class starts, everyone changes into yukata with the help of Cora’s mother, Miki Saito. On the preparation table, Okimoto and Ai start sifting the matcha (green tea) powder. They learn to get all the lumps out before scooping the matcha carefully into the tea caddy. It takes practice building a well-shaped mound.

Ai’s sister, Yuu, and Tomori are clearly here for the okashi, or sweets. Naka takes out a selection of okashi, and ask the girls to choose and arrange them on decorative plates for tea. Yellow chicks, pink sakura blossoms or blue jellies — such a difficult choice!

Over in the tea room, Cora and Otake are setting up and preparing the tea bowls, tea pot and implements. Kishimoto-Sensei quizzed them, “Is it all there?”encouraging observation and preparation. These two students are more advanced and have been practicing tea since the second grade. Their eyes scan the room, and decide who will serve and who will be the guest. “Even if someone prepares for you, you should check [that everything is prepared],” instructs Kishimoto.

Every class starts with an aisatsu, or greeting. After entering the tearoom, students sit in a row, and together ask to be taught while bowing to their sensei. The three sensei return the bow acknowledging the request.

Cora and Otake take turns practicing being the host and the guest. Cora is focused and mindful of her posture. After carefully preparing the tea step by step, she serves her guests, the two sensei and Otake. It is customary for the guest to slurp the last of the tea from the tea bowl, gently wipe the rim with two fingers and put the bowl down.

Then, Otake who is “the guest,” bows down to enjoy a closer look at the unique beauty of the tea bowl. With a bit of teenager sarcasm, Otake said, “Ooooh …. WOW!” giving the others a little laugh.

When it’s Otake’s turn to be the host, he moves almost seamlessly, as he’s been practicing for several years now. When it comes to preparing the tea, you can tell his favorite part is whisking the tea with the bamboo whisk. You can hear the “Swoosh, swoosh, swoosh” as he rapidly whisks the tea in the bowl making a fluffy froth.

Naka explained, “We don’t have any handouts, lessons are hands-on. You learn by doing, it is body memory through repetition. The movements are standardized and consistent as are the words and phrases. We begin with learning guest behavior [and] proper etiquette which is appropriate outside the tearoom as well. The four guiding principles [harmony, respect, purity and tranquility] are woven into everything you do and say.”

Students learn to focus as they must pay attention to every detail. Start with your right foot when walking into the room, maintain your posture, keep your arms rounded, hold the waste water container with your left hand, serve by turning the tea bowl clockwise so the design faces the guest — these rules barely scratch the surface of all the minute details that these students focus on to practice mindfulness.

Before leaving, the students politely say, “Osaki ni…,” to the person waiting behind in line. “Osaki ni,” which literally means “I’m going before you,” implying an expression of apology and respect.

“Our lessons are not limited to the tearoom,” said Naka. “We have been involved in community demonstrations such as JCCH’s ‘Ohana Festival, Kodomo no Hi and Day of Remembrance; Club 100’s Shinnen Kai; Myohoji Mission’s Community Day; and the [University of Hawai‘i at Mänoa] East-West Center Art Gallery’s Tea Exhibition.”

For young people, practicing tea helps them practice gratitude in a mindful way. Cora said, “It’s a relaxing way to get away from school and study.” She’s also learned to let things go when she’s had a rough day.

Otake said that it also looks good on college applications and essays because it’s cultural and something a little different from the normal extra-curricular activities. He even chose to present a tea demonstration at school for a project. His older brother, Koichiro, a senior at ‘Iolani, also practices tea, but was absent on the day of our visit.

The History of Tea

The benefits of tea have been known for centuries. How has this tradition lasted so long? When we look at the history of tea, we can see how chadö brought much needed harmony and tranquility to a world where struggle and hardships are a constant.

According to the Urasenke Foundation website (www.urasenke.org), Japanese scholar-priests, Saicho (727-822) and Kukai (774-835), travelled to China for cultural missions and are most likely the ones to bring the first tea seeds and tea drinking practice to Japan.

The first record of tea drinking in Japan occurred in 815 when the Emperor Saga received tea at Sufukuji Temple while on a journey. There are a few poetic anthologies from that time that mention the drinking of tea.

For about 200 years after that, there were no records of tea drinking until the Kamakura Period (1185-1392). Another scholar-priest, Eisai (1141-1215), reintroduced tea along with the teachings of Rinzai Zen. Eisai wrote a treatise known as “Kissa Yojoki” praising tea for fostering physical and spiritual health, which sparked Buddhist priests and their wealthy patrons to embrace the practice of tea drinking.

Eisai brought to Japan the Sung Dynasty method of preparing tea which involves the green tea that we know today. The precise gestures used to make tea are not known, the utensils include a kettle and brazier, a Tenmoku tea-bowl on a lacquered stand and a bamboo whisk. 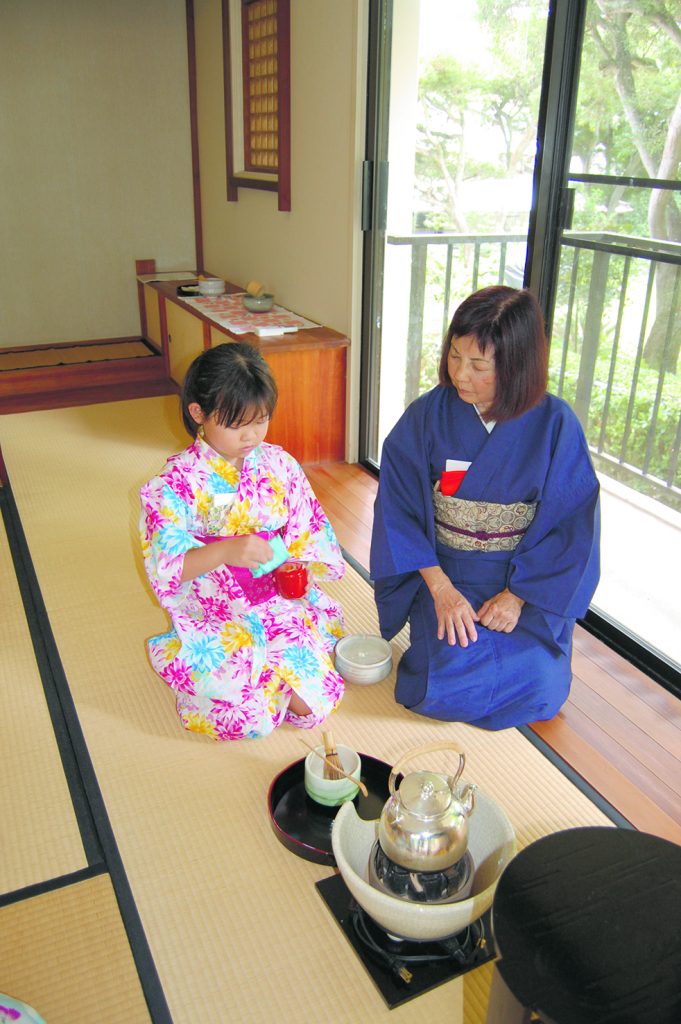 At that time, drinking powdered green tea was largely practiced in Zen temples. Green tea had acclaimed medicinal properties and sharpened mental and physical acuity which assisted the monks in their long hours of study and meditation. Japan entered a period known as “The Hundred Years of Civil War,” or Sengoku Jidai (1482-1558), due to a political and economic downfall. A shogun named Yoshimasa (1436-1490) started hosting tea gatherings as a contemplative removal from the world’s chaos. Within a four-and-one-half tatami mats room, he sought consolation and tranquility through the arts by surrounding himself with other men of culture.

The practice of tea evolved and spread to people of various backgrounds in Japan. Sen Rikyu (1522-1591), for example, was a young merchant who initially studied the tea traditions of the warrior class under Kitamuki Dochin (1504-1562). Then, at the age of 19, he studied under Takeno Joo (1502-1555).

Zen was a great influence on Rikyu’s tea practice. He served as one of the “three under heaven” tea masters to military rulers Oda Nobunaga (1534-1582) and Toyotomi Hideyoshi (1536-1598), a position of great prestige, however not without fatal consequences. For reasons unknown, Hideyoshi became displeased with Rikyu who was ordered to end his life at the age of 70.

With great credit to the descendants of the great tea masters, including those of Sen Rikyu, the tradition of chadö continues to flourish. There are three schools that were established by Sen Sotan (Sen Rikyu‘s grandson) whose heads are direct descendants of Sen Rikyu — Urasenke, Omotesenke, and Mushanokoji.

In our community, renowned Dr. Genshitsu Sen — or Sen Söshitsu XV — “was appointed UNESCO Goodwill Ambassador in 2012 in recognition of his contributions to peace and culture through the traditional Japanese tea ceremony,” according to United Nations Educational, Scientific and Cultural Organization’s webpage http://www.unesco.org/new/en/goodwill-ambassadors/dr-genshitsu-sen/. Dr. Sen is now a vibrant 97 years old.

Chadö, or the Way of Tea, is a practice of cultivating harmony, respect, purity and tranquility during troubled times whether the struggles be big or small. From worldwide pandemics and times of war to a bad day at school or nagging parents, chadö can help people of all ages to be grateful in a mindful way.

Although today, Naka-Sensei, Kurokawa-Sensei and Kishimoto-Sensei can’t be with their young students in the tearoom physically, they have given them tools for times like these.

In fact, maybe we can all close our eyes and imagine we are in a tearoom filled with sunlight, sipping a bowl of hot green tea and munching on our favorite sweets while gazing at a beautiful flower arrangement.

“We don’t see the world as it is, we see it as we are,” said author Anais Nin.

Due to the COVID-19 stay at home order, classes are currently on hold. If you would like to be contacted when classes resume, email Marilyn Naka at cknaka@aol.com. Tea ceremony classes are open to students in grades two through 12 at the Honolulu Myohoji Mission tearoom on Sundays, twice a month 1-3 p.m. Space is limited.