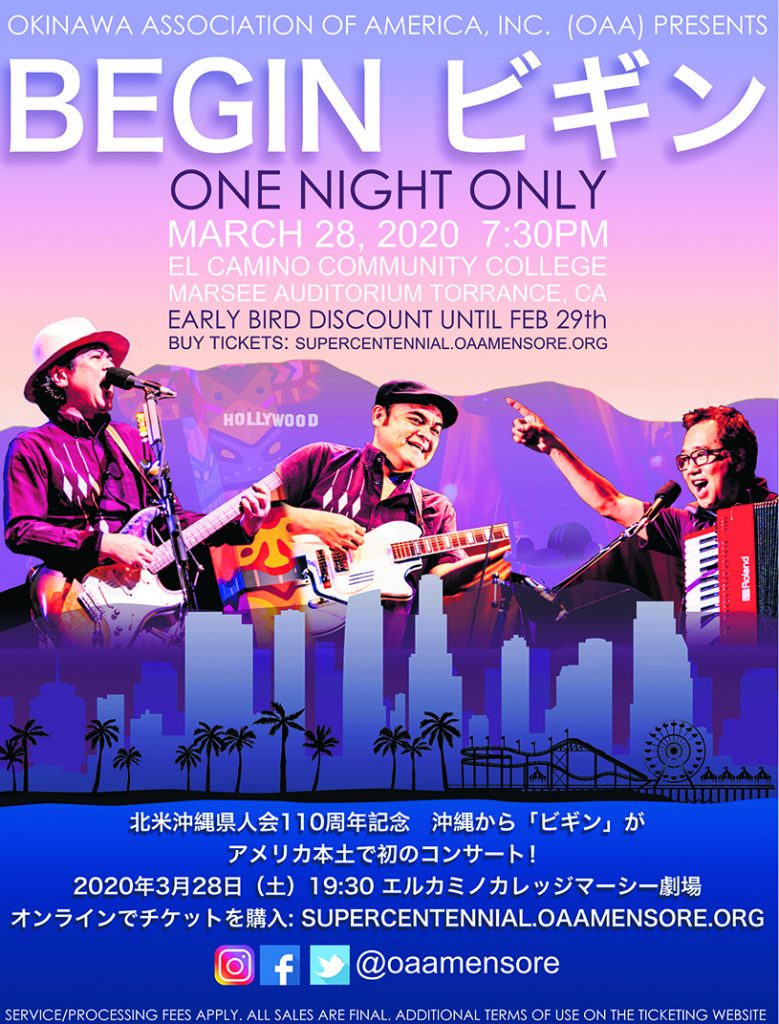 The popular Okinawan pop/folk group BEGIN will make its U.S. mainland debut in a concert set for Saturday, March 28, in Torrance, Calif. The 7:30 p.m. concert, sponsored by the Okinawa Association of America, Inc., will be held in the Marsee Auditorium on the campus of El Camino Community College (16007 Crenshaw Blvd.) in Torrance.

BEGIN was originally scheduled to headline OAA’s 110th anniversary celebration last September. The concert had to be postponed, however, due to unanticipated visa issues. “The OAA is grateful to all the ticketholders who have been so patient and understanding throughout this situation,” stated OAA president Edward Kamiya. “We are excited to finally welcome BEGIN to the South Bay.”

The BEGIN concert is open to the public. Tickets range from $50 to $175 and can be purchased at http://bit.ly/OAABEGIN. Follow OAA on Facebook, Instagram and Twitter at @oaamensore for updates on the concert and the OAA.

BEGIN came together 30 years ago in Okinawa when Eisho Higa, Masaru Shimabukuro and Hitoshi Uechi — childhood friends from Ishigaki Island — combined their musical talents as composers, musicians and lyricists. The members say their music is inspired by the culture of Okinawa and blues music. Their songs express their love for their island home and a deep respect for the land, nature and history, combined with fond memories of their childhood. The popular song, “Nada Sou Sou,” was the theme song for a movie of the same name set in Okinawa.

BEGIN released its first single, “I Miss You,” in 1990. Since then, hey have released more than 30 albums and eight DVDs. Their latest album, “Gajumaru Best,” was released last October.

The Okinawa Association of America, Inc. is a 501(c)(3) nonprofit corporation headquartered in Gardena. It has about 800 member-families. Membership is open to anyone interested in the Okinawan cultural heritage. OAA strives to preserve, perpetuate and promote appreciation for Okinawan culture through education and local and international exchanges. It also promotes mutual friendship and aid to its members.