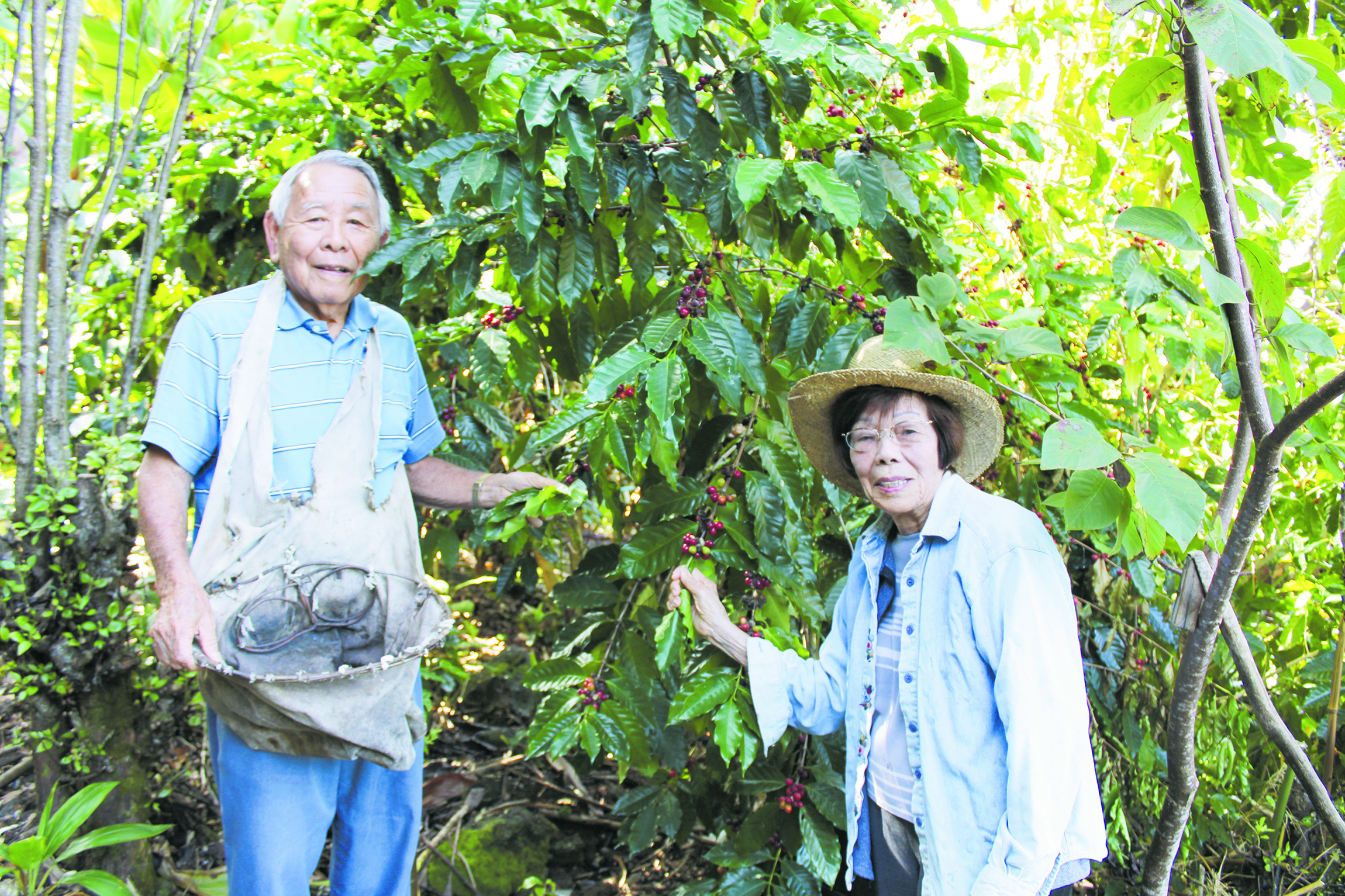 As I listened to Takeo Nakasone’s story, I was struck by a sense of place and time that began on a coffee farm on the western slope of Hualälai on Hawai‘i Island. It is where Takeo grew up on his parents’ farm in beautiful Hölualoa in North Kona in the 1930s. His story is part of a bigger one, the unfamiliar backstory of the much-praised Kona Coffee. Most of us have had a cup of the famous brew, but not many of us know its humble and true grit origins story.

So, before we delve into Takeo’s story, let’s take a step back in time and retrace the journey of this incredible, flavor-filled bean from Kona.

A Brief History of Coffee in Hawai‘i

The first coffee plants were brought to Hawai‘i in 1817 by a Spaniard, Don Francisco de Paula Marin, who was King Kamehameha the Great’s personal physician and interpreter. Marin noted in his journal that the seedlings were planted on Oahu. Aside from that, not much more is known about the outcome of the planting, however.

Nearly a decade later, in 1825, an English agriculturalist named John Wilkinson brought coffee plants to Hawai‘i from Brazil. They were planted in Mänoa Valley on the estate of Kamä‘ule‘ule, also known as Chief Boki, who was the governor of O‘ahu at the time. Boki also served under King Kamehameha II. In 1828, cuttings from Boki’s estate were cultivated in the Kona region by the Rev. Samuel Ruggles, an American missionary. Kona Coffee came onto the world’s stage when Henry Nicolas Greenwell, a pioneering coffee merchant, was awarded a “Recognition Diploma” at the 1873 World’s Fair in Vienna, Austria.

In 1890, Kona Coffee saw an upward surge in price. European and American investors poured into the region and began cultivating coffee on large plantations.

In the ensuing years, people of various ethnicities worked Hawai‘i’s coffee plantations, with Japanese immigrants making up the largest group.

In 1889, Hawai‘i became a U.S. territory when it was annexed by the United States. When tariffs were lifted, resulting in higher prices for sugar investments, agricultural interests shifted from coffee to sugar. Coffee prices plummeted, resulting in a drop in production due to an oversupply on the world market. 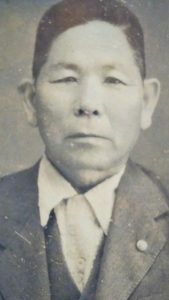 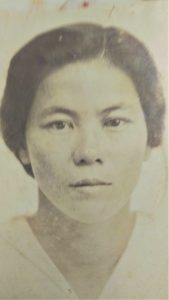 A strong work ethic and close-knit Japanese families were paramount to the farmers’ economic survival. Those families endured tremendous hardship in order to realize their dream of leading an independent life.

By 1910, nearly eighty percent of Kona’s coffee farmers were Japanese immigrants. Most had large families with four to eight children who helped on the farm, thus reducing outside labor costs. The families lived a fugal lifestyle. Some family members took outside jobs during the most difficult financial times.

Takeo Nakasone’s family was one of those families, although his parents did not have a big family. In fact, Takeo was an only child. His father, Matsuni, emigrated from Okinawa in 1919 or 1920 and worked on a sugar plantation on Maui. His wife, Moto, also from Okinawa, arrived in Hawai‘i in 1922. The couple eventually made their way to Kona during a period of prosperity.

Sometime in the mid- to late-1920s, Matsuni approached Kiichi Onaka, an immigrant cattle rancher from Fukuoka-ken, if he could help him secure a loan to purchase an 11-acre banana farm. Onaka must have seen a man he could trust in Matsuni, because he agreed to co-sign a loan from Bishop & Co. Bank, known today as First Hawaiian Bank.

Matsuni purchased his farm from a Chinese family for $2,000 and, together, he and Moto started clearing the land and planting coffee to bring in additional income. Matsuni and Moto were among a handful of Okinawan Issei who became coffee farmers in Kona. Others included the Kakazu, Nagamine, Tamashiro and Tsuhako families. They, along with the Nakasones, supported each other through good times and bad times.

Little did Matsuni know that the Great Depression (1929 to 1939) would threaten his and Moto’s dream of a better life and test their mettle. However, history has shown us that these formidable Issei from Okinawa and Japan overcame extreme economic hardship and still provided for their families.

“We had no pipe water, no stove, no refrigerator, no light until daybreak, and we carried firewood every day for cooking and the furo (wooden bathtub),” she said. “But life was so much better here, we never thought about how hard we worked.”

Although they struggled, Matsuni and Moto Nakasone managed to make their quarterly interest payments of $45 and made good on their loan.

Takeo, their only child, was about 10 years old when he started working on his parents’ farm. He awoke before dawn and as soon as there was enough light to see, he processed coffee beans until it was time for him to leave for school. Takeo then walked the few miles to school. After school, his farm duties continued, especially during the all-important harvest season, which ran from August until January or February, depending on the farm’s elevation. The coffee cherries in lower elevations such as Hönaunau in South Kona were the first to ripen while farms at the 1,000-foot and higher elevations, like Hölualoa, were the last to ripen.

Also a part of the Kona coffee landscape in the early days were the beloved Kona Nightingales, the long-eared donkeys that most farmers owned.

“I could hear the hee-haw coming from our neighbors’ coffee farms,” recalled Takeo. “We all had roughly 10-acre coffee farms, so our neighbors were not right next door. The hee-haw would come from here and there in the mornings and evenings. I think the donkeys were telling us they were hungry,” he said, smiling.

“They carried bags of coffee cherries from the field up the hill to the ‘flat,’ where we processed our coffee. We worked hard and our donkeys worked hard, too.”

The Nakasone family owned two donkeys. Besides hauling bags of coffee cherries from the field, they also carried water to the fields to irrigate the coffee trees. The family also brought the donkeys along to carry their groceries home when they shopped at Uramoto Store.

If a farmer didn’t have enough cash to purchase his goods in those days, the storeowner would extend him credit. The farmers would generally pay off their debts with bags of coffee after the harvest season. Storeowners would, in turn, settle their debts to their wholesalers with those bags of coffee. This ensured that American Factors and Captain Cook Coffee Company, the two major wholesalers that also owned the coffee mills, would have the bulk of the year’s harvest.

In 1953, Matsuni and Moto turned over the title to the farm to Takeo, who was ready to get married and start his own family. In accordance with the immigration policy, Takeo had to show his assets and prove that he could support his wife-to-be, Shigeko Owan, who would be immigrating to Hawai‘i from Yomitan, Okinawa.

The couple was married in 1954 and Shigeko immediately began working on the coffee farm. It was hard for her to leave her family and her beloved Okinawa, but her grandmother had arranged the marriage and Shigeko’s pride would not allow her to complain.

In retrospect, Shigeko says she was fortunate to have married a kind and gentle man like Takeo. All four of their children helped on the farm. Shigeko learned to read, write and speak English after settling in Hawai‘i so she could communicate with her children. Like other strong Issei women, Shigeko learned to adapt quite well to her new life in a foreign country and even communicates by email now.

Besides working on the farm, Takeo and Shigeko took part-time jobs to send their four children to college. The children were born one after the other, so when the youngest started college, all four were attending universities at the same time.

Takeo worked for the state, driving the mobile library. Shigeko taught Japanese school, then worked for Hawai‘i County and, later, as an interpreter for Aloha Airlines, assisting Japanese visitors at the Kona International Airport. The family took out student loans for their youngest child and two of their other children who were attending college on the Mainland. They struggled to pay for everything, including their children’s trips home during the holidays.

In 1984, Takeo and Shigeko decided to sell their coffee farm to ensure that their children could earn their degrees without financial pressure.

“All we wanted was for our children to have a better life than we did” was a comment commonly heard among the early coffee farmers who were willing to work hard and persevere in order to succeed.

Takeo and Shigeko are now long retired. They live comfortably in their home at the 1,500-foot elevation overlooking the Kona coast. At 87 years young, they still pick, process and roast their own coffee for home consumption. And when they travel to Okinawa to visit relatives, their homemade “Kona Nightingale Coffee Company” brand coffee makes for the best omiyage (gifts). The Kona Nightingale label on their bags is also a fitting tribute to the trusted donkeys that worked alongside the Kona Coffee pioneers.

Coffee has shaped the people, landscape and economy of the Kona district for over 190 years. It has played a major role in the identity and culture of Kona. In fact, Kona’s coffee industry was so vital, economically and socially, to the area’s livelihood that, for a time, the public school schedule was adjusted so that “summer vacation” happened to fall during the harvest season, thus allowing kids to help their families on the farm or hire part-time help to bring in the year’s harvest.

Since the 1980s, coffee prices have risen steadily as consumers’ taste for specialty or gourmet coffees has grown. Companies like Starbucks have and continue to fuel that growth, and Kona is one of the best growing regions in the world for specialty coffees.

These days, we describe coffee much like we do wine, like some of the most exciting and intriguing wines from Italy come from “volcanic terriors” — terrior meaning complete natural environment factoring in soil, typography and climate. I would add farmers as a factor. With traditional knowledge and modern science, farmers employ the best agricultural practices, and they have refined the after-harvest process, which can make a good coffee better, and even great. When all stages of production are optimal, the result is some of the world’s finest craft coffees, unique to its region of origin. Every cup of Kona Coffee has a story to tell.

These days, Kona Coffee is in high demand, commanding a hefty price. That’s a far cry from the early days when it was competing in commodity markets. When the large plantations and other farmers gave up on coffee, the Japanese families gambare’d and worked hard to keep Kona Coffee and its brand in the global marketplace.

So, go out and purchase a bag of 100 percent Kona Coffee and brew a pot. And when you savor that first sip, think of those Japanese pioneers who have earned their rightful place in the history of one of Hawai‘i’s most iconic products — Kona Coffee.

Dan Nakasone is a Sansei Uchinanchu from Wahiawä. He is a marketing and advertising professional who served as a producer/researcher for PBS’ award-winning food and culture series, “Family Ingredients,” which is based in Hawai‘i and hosted by Chef Ed Kenney.