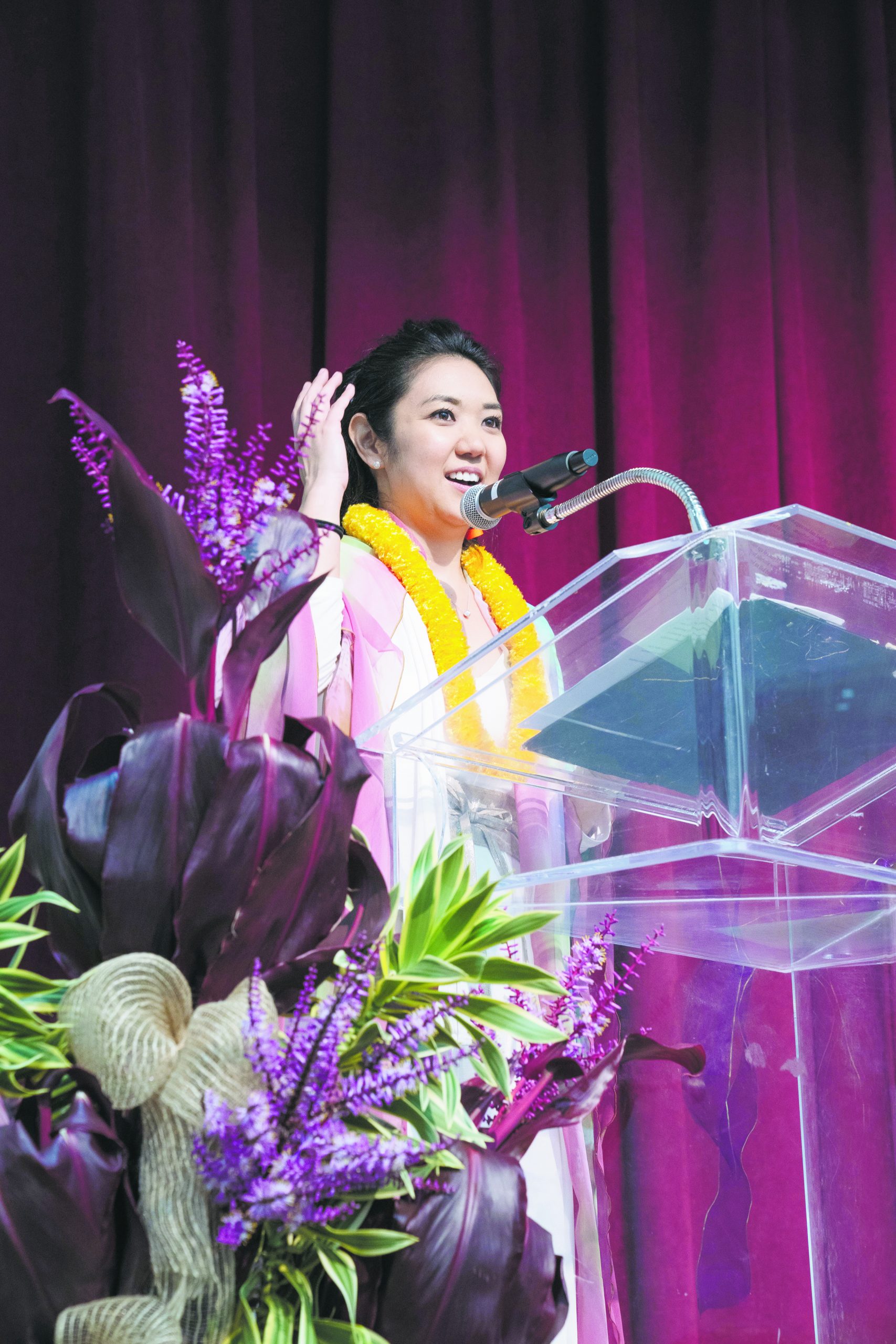 Editor’s note: On Jan. 18, the Hawaii United Okinawa Association installed Lynn Miyahira, a yonsei, as its 2020 president. Miyahira isn’t the HUOA’s first woman president, nor the first yonsei to lead the organization. But she made HUOA history that day by becoming the first woman to follow in the footsteps of her father, the late Wayne Miyahira, in leading the organization. Thirty years ago, Wayne Miyahira served as 1990-91 president of the then-United Okinawan Association of Hawaii — today’s HUOA. The 2020 president was just a little girl then, but as Miyahira shared in her incoming president’s message, her memories of those years laid the foundation for the person she is today.

The Herald is pleased to share the text of Lynn Miyahira’s speech with you.

Our theme, “Ukaji Deebiru” — Ukaji Deebiru means Okage sama de in Japanese, meaning with deep gratitude, I am what I am because of you. It conveys this deep sense of appreciation — many people have touched on it today — for those who came before us. And, I thought it was even more appropriate given that “Okage Sama De” was my father’s (Wayne Miyahira) theme in 1990 when he was president of this organization.

As a child, I was immersed in the Okinawan culture — I took Okinawan dance lessons, I played taiko, I studied karate, and my dad dragged us (Lynn and older sister Ann) to every single Okinawan event possible . . . so it’s not like I really had a choice.

But it wasn’t until I went to college on the Mainland that I really realized what a gift my Okinawan heritage was. It took moving away from all of this and having to explain my Okinawan heritage to people that I truly realized how special this community was. I learned, after the fact, actually, from somebody else, about the pigs from the sea story — how our Okinawan community galvanized back in the postwar era and raised a ton of money to send 550 pigs to Okinawa after the war. It was only after organizing my first fundraiser that I realized what an amazing feat that must have been.

They say it takes a village to raise a child. I am that child. This community raised me. You were here when I needed you most. You were there to love and support me when I succeeded, and you were also there to scold me and remind me . . . if I was running around backstage at the Okinawan Festival or something, the aunties would be there to scold you; that’s part of the community, as well.

When I say it takes a village to raise a family, I really mean it. I think what happened is that I have many Okinawan “mothers” and many Okinawan “fathers” who really, truly feel a connection and I know from the bottom of their hearts that they truly want to help me, so I want to say “thank you” to all of you here today.

I look around this room today and I see an incredible sense of pride in our community, and it’s not only me who thinks that we have something special here.

Back in 1982, Dr. Scott Matsumoto wrote a chapter called “Okinawan Migrants to Hawai‘i.” He was a UH professor of public health, and he wrote: “A notable characteristic of the Okinawans in Hawai‘i has been their ability to organize and work in groups with a strong sense of social solidarity. The network of family ties, as well as place of origin in Okinawa, have played important roles in the successful development of many business enterprises. They have made important contributions to Hawai‘i as political, financial and cultural leaders of the community.”

Isn’t it nice when somebody else recognizes the work that you’re doing? Wow! That was from 1982.

But, what is it? What is that something special?

I believe the strength of our community is our ability to span generations. How many times have you seen Grandma, Grandpa, Mom and Dad and all the kids coming together at an Okinawan event? We don’t only focus on the young, or the business professionals, or just the senior citizens; we try to bring multiple generations together.

I also think that what unites us is a common sense of overcoming adversity. So when we face challenges in our own lives, we should pause, think for a moment — think about all the adversities that our ancestors had to overcome: They overcame plantations, they overcame wars — and they did it not by competing with each other, but by helping each other. We should never lose that immigrant mentality — that grit, that compassion for others. That is what unites us and that is what will keep us as the Hawaii United Okinawa Association.

So to all of you young kids in the audience . . . I, too, was that 8-year-old kid sitting in the audience wondering, why do I have to be here listening to so many speeches, for hours? So, hopefully, one day, you, too, will also understand what a gift this community is.

Like most fourth-generation Uchinanchus, I never got a chance to meet the Issei. But, it’s not only that first generation who left behind gifts. It’s truly the second and third generations before me who also worked incredibly hard to gain a deep respect from the wider community here in Hawai‘i. They built this (Hawaii Okinawa Center) for us, and so I talk to my fellow fourth generation, fifth generation, sometimes sixth generation Uchinanchus — it’s up to us to keep this going. We cannot let the hard work of those before us . . . I don’t want it to stop with us; we have to keep it going. They built a really proud place for us here in the multicultural fabric of Hawai‘i, so it’s up to us to keep it going.

I want to thank everyone who helped today to put together this wonderful banquet, and especially for those of you who have all come up to me and talked about how you remember my dad and you’re so happy I’m doing this and you know he’s watching over me, and really I do, I feel him right here. Thank you to the core team who put on this installation banquet today, and I’m thanking you all in advance for the work that we’re going to be doing in 2020.

Let’s make sure that we continue to work together and remember our Okinawan values of Yuimaaru (working together), Ichariba Chode (once we meet, we become friends forever) and Chimugukuru — the heart. And as we head into 2020, Chibariyo! (let’s go for it!).