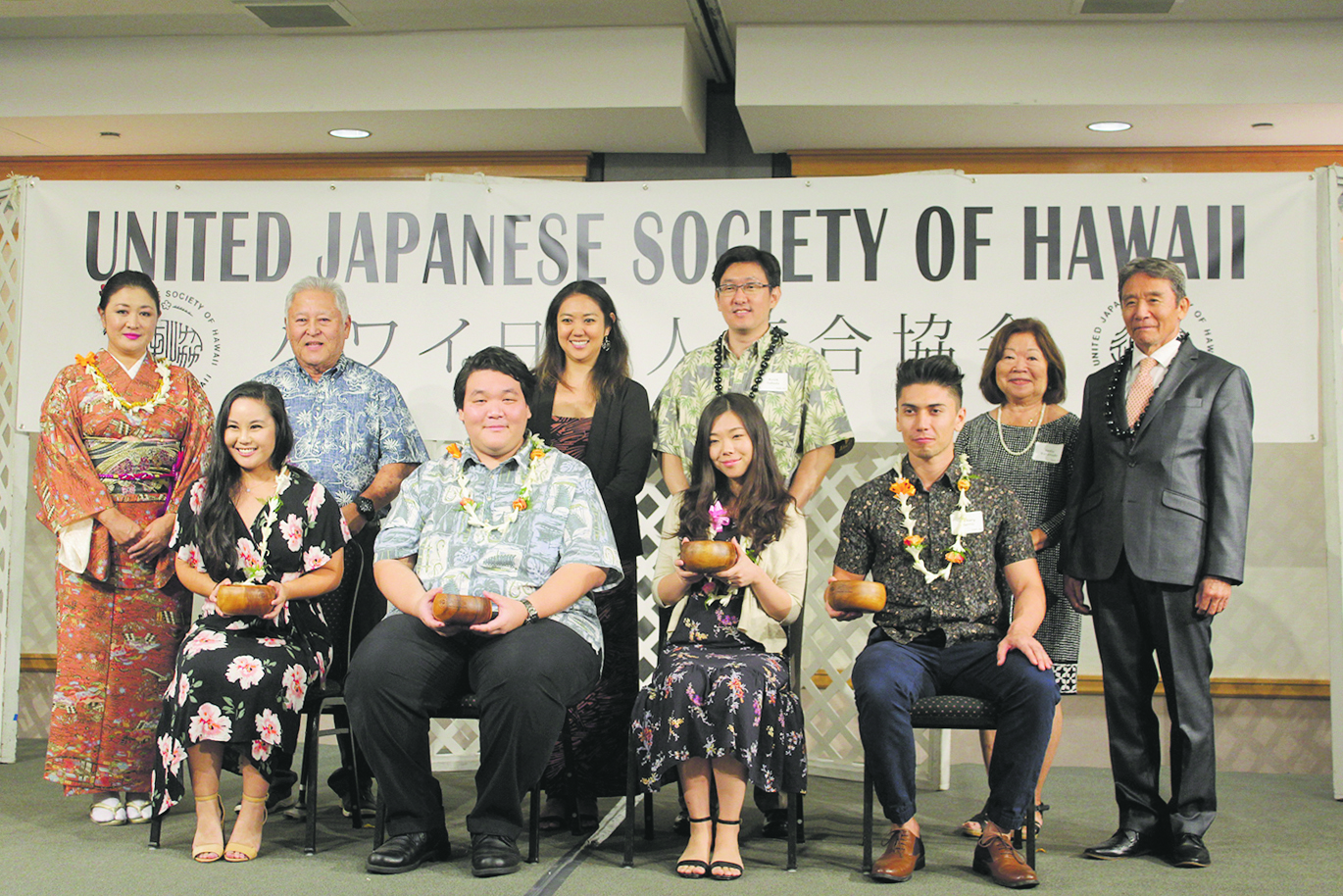 United Japanese Society of Hawaii members and supporters welcomed the “Year of the Rat” at the organization’s shinnenkai at the Japanese Cultural Center of Hawai‘i’s Manoa Grand Ballroom on Jan. 11.

A moment of silence was observed to remember and honor UJSH members who have passed on. Onoe Kikunobutomi (Brandon Goda) from the Kikunobu Dance Company then performed a Japanese dance, “Yanra Medetaya,” in celebration of the new year.

UJSH president, the Rev. Akihiro Okada, welcomed everyone to the celebration and expressed gratitude for the kindness of the people of Hawai‘i. Okada encouraged everyone to work together to support the Japanese community in Hawai‘i.

Ito was recognized for promoting friendship and goodwill between the people of Hawai‘i and Japan, more specifically with Niigata, his ancestral homeland. He said he was humbled by the experience of being a recipient of an imperial decoration. Ito said he was grateful to the people who came before him and helped him stay connected to his Japanese heritage, which he said had enriched his life.

Hayase established the Kokusai Shigin Club, a poetry club, while imprisoned in a Mainland internment camp during World War II. He has also dedicated much of his life to the Hawaii Meiji Kai, which honors the memory of the naval officers from the Meiji era who died in Hawai‘i. With past UJSH president Christine Kubota translating for him, Hayase thanked everyone for supporting his many community efforts.

Hayase and Ito received their imperial decorations from Consul General of Japan Koichi Ito at the Japanese Consulate in Honolulu.

Kawakami returned to school to earn her General Educational Development certificate after a career as a dressmaker and after she had become a grandmother. She went on to earn her master’s degree from the University of Hawai‘i at Mänoa and to write two books on Hawai‘i’s plantation experience, including one on the Japanese and Okinawan picture brides who came to Hawai‘i in the early 1900s.

Kawakami, who is 98, was born in Japan and brought to Hawai‘i when she was 3 months old. She decided to travel to Japan to accept her decoration in person at the Imperial Palace in Tökyö and then went on to visit the graves of her relatives in Fukushima, Wakayama and Kumamoto. She shared with the UJSH audience her thrill at seeing the new Emperor Naruhito in person.

“. . . I was fortunate to be placed near the left side of the stage where I had a good view. The other awardees filed in quietly and stood in place. About 15 minutes later, the Emperor was introduced. Emperor Naruhito shared his appreciation for everyone’s contributions to world peace and goodwill, and he thanked us all for coming . . .”

Kawakami expressed her appreciation to the Government of Japan and the staff of the Japanese Consulate for facilitating her visit to the Imperial Palace so she could see Emperor Naruhito in person, a memory she said she would “cherish forever.”

The UJSH also presented its 2019 Kenjin Kai Young Achiever Awards during the program. Honored were Central Oahu Kumamoto Kenjin Kai member Heather Omori, Hawaii Fukuoka Kenjin Kai member Mamina Tahara, David Shinsato from the Hawaii United Okinawa Association and Zackery Harris from the Honolulu Fukushima Kenjin Kai. Omori represented her fellow “Young Achievers” in thanking their respective kenjinkai for nominating them for the award and to the UJSH for honoring them.

All of the honorees make time to serve their kenjin kai even with their busy professional schedules. Omori is a teacher and tutor at Daniel K. Inouye Elementary School on Schofield Barracks. Tahara works as a tax supervisor for Accuity, LLP; Shinsato is a college-level chemistry instructor; and Harris is a writer, actor and film director.

The remainder of the program was devoted to entertainment that included performances by individuals as well as the various kenjinkai, including a kendö demonstration by UJSH president Rev. Okada.

Kanzo Nara, a UJSH vice president, closed the event with a lively tejime.