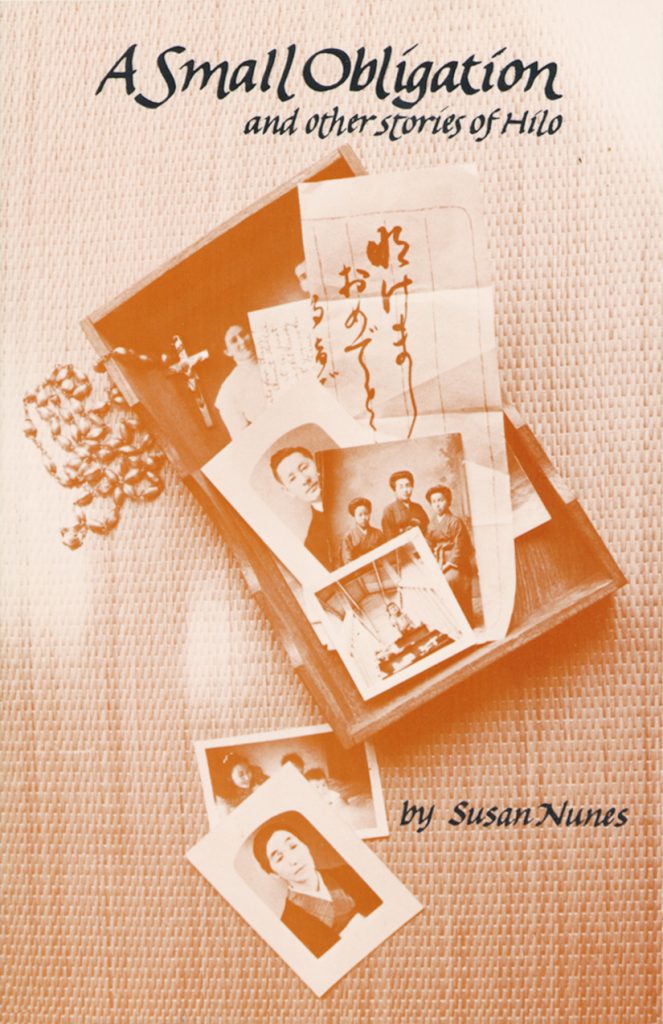 Susan Nunes
From “A Small Obligation and Other Stories of Hilo,”
Published with Permission

Editor’s note: The following short stories by Susan Miho Nunes are set in her hometown of Hilo on Hawaii Island. They were published in 1982 in her book, “A Small Obligation and Other Stories of Hilo,” by Bamboo Ridge Press. Nunes now lives in Berkeley, Calif., where she continues to write.

We thank Susan for allowing the Herald to share her wonderful stories with our readers.

To us they were always “the Ebesu girls. The eldest, Tsuyako, is of my mother’s generation, but they are still “the Ebesu girls.” No one is more generous. And Hilo is a town of generous people.

A few years ago, my two sisters and I made a brief trip to Hilo. We visited the Ebesu Store with a small gift. The gift was really a token — and it’s important that you see this — because the Ebesu girls were so good to my family and a mere gift would never cover all they have done for us over the years.

We walked through the delivery entrance with a box of mochi and careful, explicit instructions from our uncle to say hello, leave the gift, and walk out, quickly, before we were inundated with things to take back to Honolulu. “If you stay,” Taka had said, “they’ll start packing a box.”

“Hello,” we said to the first sister, who was seated at a large table cutting flowers. The store smelled the same. It had not changed. She looked up over her glasses. “Hello,” she said, recognizing us, then called into the depths of the shop, “Look who’s here. Shiho’s daughters.” Two more heads appeared, and one of them said, “Come in, come in and say hello.”

We walked into where the glass chiller stood filled with orchids, roses and carnations, just as it used to be when we were children and would press our noses against the cold glass. I never left that store empty-handed.

A fourth appeared. “How is Grandma?” She was fine, I said, still holding the box of mochi and beginning to regret being the eldest, the one to present the gift. Such a small one. “And your mother?” asked another, without waiting for our answer continued, “Look at Lizabeth. No it’s Sara! My, you do look like your father.” Sara smiled and Liz was grinning.

Finally I managed, “Here. This is just a little something from the three of us and we really have to go now.” All in one breath, just as I had been instructed.

“Why do you have to go? Are you on the way to the airport?” We nodded the lie. It was only a little one. “Wait a few minutes, please, girls.” Kiyochan insisted. “You can wait and we’ll pack you a box of vegetables.”

We shook our heads vigorously. “Oh no. We really have to go.”

“What time are you leaving?” asked Nobuchan suspiciously. Liz mumbled something in reply, and Sachi said, “Well then, we’ll pack you a box. For Grandma.”

“He’s afraid to,” we laughed. “He said we were to say hello and run or you would start packing a box of vegetables. See? He was right.”

“Oh, that boy!” Taka, you understand, is in his forties.

Taking advantage of the joke, we turned to go. “Next time,” we said, “next time.” More laughter followed us as we backed out of the store with one of the Ebesu girls in pursuit, protesting and calling and laughing. Like bells. Just like bells. “Well,” we said to Taka, “we made it.” He didn’t seem impressed.

When we got back to Taka’s house to pick up our luggage, Aunty Cecelia met us at the door. At her feet were two flower boxes tied with white string and one large carton of vegetables, taped and tied with brown cord. “Nunes” was written on all three. “It came five minutes ago,” said Cecelia, “I told you so.” But we were laughing so hard we hardly heard her. And tears were running down Sara’s face.

She was Japanese and he was Portuguese and they were introduced on the tennis court next to the fire station by the town mortician. Everyone said wasn’t that funny. They didn’t know that he had waited to meet her for three years ever since the day he saw her at the beach under a parasol. She was so fair. (“One pound powder,” her friends called her.) They were married in March of 1941, nine months before Pearl Harbor. (Her mother took to bed the week before; her parents did not attend the wedding.) She wore a navy blue dress with a white collar. He wore a business suit. They’re not smiling in their wedding photograph.

On a rainy Saturday morning Sara walked into the kitchen with blood all over the front of her pink flannel nightie. “I fell on the milk bottle,” she cried, holding up her skinny arm.

Liz and I stared at the neat V in her forearm. It gaped back at us, spewing blood over a tongue-like flap. Blood dripped down her nightie, soaked her bunny rabbit slippers, pooled on the floor. But we didn’t scream. Only Sara screamed. “Make it stop!”

Mother dropped the spatula into the pan, splattering the front of her white terry cloth robe with hot grease. “Oh my god!” she cried and averted her face. The eggs kept right on frying.

Daddy stood up from the table, took three determined steps, swooped Sara into his arms, carried her to the sink, and wrapped a dishtowel around her arm. “Call the hospital,” he said to Mother.

He held Sara tightly. “You’re too little to carry milk bottles,” he said. Then he kissed her.

Mrs. Tanaka paused a moment to listen, then wiped her forehead with the back of her soapy hand. “That’s the Mochi Man, Amy-chan.” She picked up the wash brush and continued scrubbing.

“But Aka. What are they doing?”

“They’re pounding the rice,” replied the woman without ceasing the rhythmic movement of her right hand.

“Oh,” came the soft reply from across the wash basin.

When Mrs. Tanaka looked up the child had disappeared.

Hanako was stirring a large kettle of boiling starch for her mother when the kitchen door slammed.

Hanako looked at the little face, so insistent for its four years. “Aha’s at the store. He’s coming home soon. Sit here and wait.”

They heard Mr. Tanaka coming up the path and the child was at the door to meet him.

“Ako. Ako, where are my slippers?”

Amy clattered into the kitchen, slippers on.

“Okay. Okay. Ah ha ha ha.” Laughing, he took her hand and they walked out the kitchen door.”