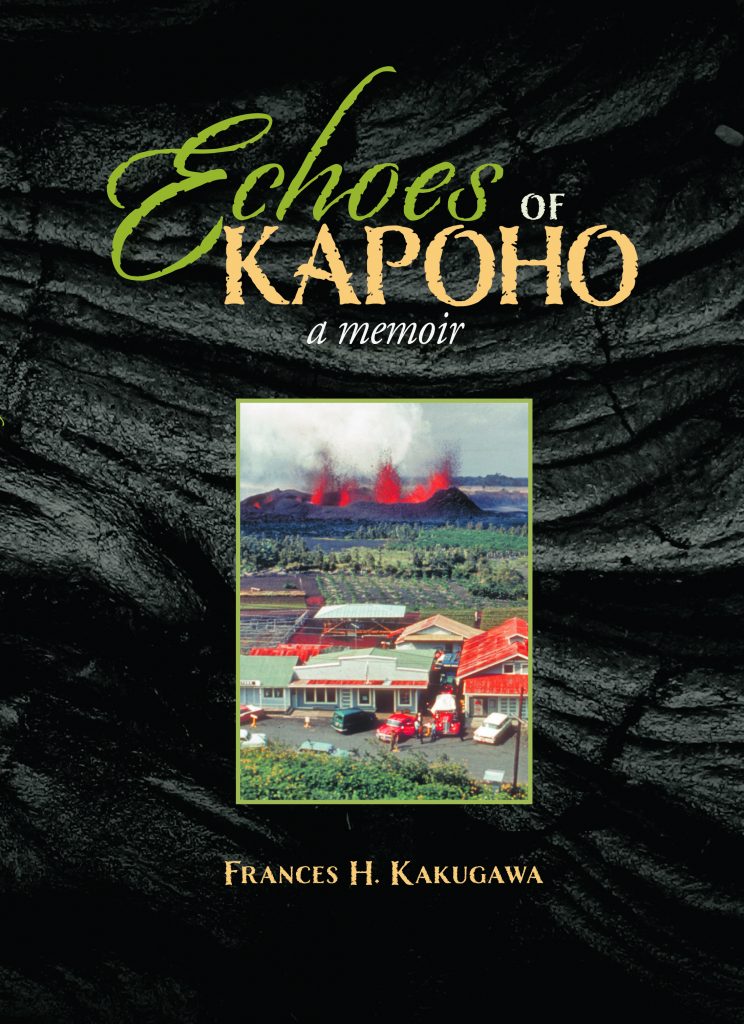 Frances H. Kakugawa
From “Echoes of Kapoho,”
Published with Permission

Editor’s note: The following essay by Frances Kakugawa is from “Echoes of Kapoho,” Kakugawa’s second collection of stories and poems relating to her early childhood in Kapoho, where she was born. The book was published last year by Watermark Publishing. Kakugawa’s first Kapoho book, also published by Watermark, is titled “Kapoho: Memoirs of a Modern Pompeii.”

Kakugawa, who now lives an ocean away from Kapoho, in Sacramento, writes a monthly column on caregiving for the Herald called “Dear Frances.” The Herald thanks her for allowing us to share her essay with our readers.

Memoir writers are often accused of invading the privacy of others. “Did you write about me?” readers ask. “Is that woman my neighbor?” “Who were you writing about in that story?”

I should have known that Kapoho would not be fickle or fearful about one of its own. No one accused me of shaming or exposing them. No one asked for the true identity of a character in the book. The doctor’s daughter didn’t ask me if the “Horse Doctor” was her father.

Appreciation is all I’ve heard from Kapohoans. On the local coconut wireless, I get comments like, “Can you believe someone from Kapoho became a writer? I cannot believe she wrote about us, she must be so smart. We are so lucky to have someone like her write about us. She saved Kapoho for us.”

At my first book signing for Kapoho, three generations of the Nakamura family stood first in line. Their faces showed their pleasure at seeing their home and store on the cover of the book. They stood in silence, then whispered, “Thank you.” The cover photo depicted part of Kapoho that was destroyed by lava in the late 1950s and early ’60s. Whatever we had lacked in wealth and modern appliances, we made up for with neighborly love. What we may have lacked in education, Kapohoans more than made up for with wisdom. I felt this in their silence.

Though the landscape no longer hosted the old familiar ways of my former home, Old Kapoho still whispered to those who stopped to listen. The newcomers used the book to learn of the history of the land they had settled.

One new resident promised to keep the human values that had been the heart of the old Kapoho. Another who lived along the shoreline said, “Your book changed my life. I leave the gate open so people can have access to the ocean. That ocean belongs to everyone. I promise we will live as the people of the old Kapoho did.”

In 2018 it was time for folks to leave again. Pele rose from her long sleep to finish what she’d started 60 years earlier. Our old house lot is now buried under tons of lava, along with Green Lake and the rest of Kapoho and most of its shoreline. Pele is still actively pursuing a path of destruction. History is an ever-changing landscape, and if my village of Kapoho is anything, it is certainly its history.

There is, however, one feature of living in Kapoho that everyone, new or old, shares in common. No matter what your status or what kind of property you have, be it a mansion or a modest lot, the land you think you own really belongs to Pele. Everyone who lives in Kapoho knows that. People only get to live there as long as Pele wants them to. When the goddess says it’s time to leave, that’s it.

My last visit to Kapoho was a year before the 2018 flows. At that time mailboxes lined a newly paved road, showing that life was reasserting itself over the old blanket of lava. A woman in the old Nakamura house shared her ghost stories with me: “We live with a friendly ghost in our house.” Where before there was only lava, now there were papaya farms, coconut trees heavy with fruit, and even traffic. There was a memorial of remembrance at the Kapoho cemetery, built by children whose family members were buried there. The old lighthouse was surrounded by lush green coconut fronds; its beacon still pointed toward the white-crested Pacific.

Years after I first left Kapoho with a nudge from Pele, I rejoiced and thanked her as many did. She gave me the shove I needed to pursue my dreams and escape with my pen in hand. In other parts of the country, other Kapohoans shared similar experiences. “Who would have thought I’d be living in California?” remarked one of the sisters from the old Okuda Store. Mrs. Nakamura was delighted: “For the first time I have electricity in our new place. Thank you, Pele.” And there were always those who remained to welcome us back when we visited.

Today both Kapohos are gone — my old one and the newer settlement that took its place. What wasn’t burned by the ongoing eruption will be perfectly preserved, but still gone forever. That, however, is not the end of the story. There will be a third Kapoho, and a fourth, and a fifth. How far in the future will this be? Who can say? But the fires of Pele will someday withdraw to their home deep inside Kīlauea, the lava-made soil will become rich and fertile again, and Pele’s beacons of warmth and delight in the night sky will attract new visitors and residents, to wonder and settle under her watchful eyes.

Like the old Kapoho, from the rock of our culture and the resilience of our people, memories too are preserved deep beneath the hardened rock. They will flow as always in our stories and in books like this one. Someday they will break the surface of our former village and cover the landscape with new farms, fruited trees, cane and papaya, tropical forests and the dreams of a future for Kapoho children playing on sandy beaches. There will be stores and roads and indoor plumbing and electricity that finally arrived in our village — and none too soon. Electric vehicles and mobile phones and wonders unimaginable will be there too. Kapohoans, of course, will do what they have always done: fish in the ocean, wonder at the night sky and pay their respects to Pele, knowing all the while that what she so generously gives to the people of Kapoho, she will someday reclaim again as her own.

Thank you, Goddess Pele, for my Kapoho.