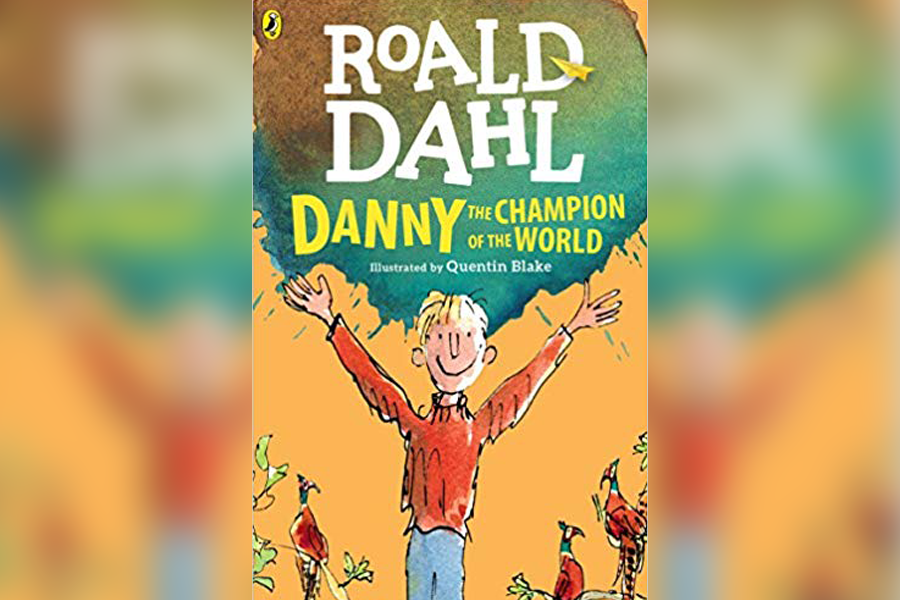 At the height of his literary success, British author Roald Dahl decided to write a tribute to a father he had barely known and a boyhood he had never experienced. Dahl wrote most of his story in an antiquated gypsy caravan that he had rescued and refurbished as a playhouse for his young children who had long outgrown its charms. Set in the bucolic landscape of Buckinghamshire in southeastern England, where he had retreated to with his family, Dahl unfurled a tale of a young boy and his widower father as they careen from one adventure to the next, filled with the excitement of never knowing what each day will bring.

Published in 1975 by Alfred Knopf of New York, “Danny, The Champion of the World” was greeted with mixed reviews. Critics lambasted Dahl for the story’s dark underpinnings and shadowy inflections, but children loved its message of self-empowerment and the sly humor of its quirky characters.

The son of Norwegian immigrants, Dahl lost his own father at the age of 3 and was raised by his single mother in the gathering storm of the Great Depression and the Second World War. In 1939, he enlisted in the Royal Air Force and became a highly decorated fighter pilot, despite having had very little actual flight training. With the end of hostilities, Dahl entered the British Foreign Service and travelled the world in search of adventure.

By accident, he discovered a talent for writing and began publishing essays and short stories on the side that garnered increasing acclaim. By the time he wrote “Danny, The Champion of the World,” he had already published beloved classics such as “Charlie and the Chocolate Factory,” “The Fantastic Mr. Fox” and “James and the Giant Peach,” all of which had firmly established him in the hearts of young children all over the world.

At the center of Dahl’s gentle parable is the relationship between Danny and his father, who runs a whimsical one-car repair shop on a tiny plot of land surrounded by the rolling hills and medieval forests of the English countryside. Danny’s idyllic boyhood is increasingly interrupted by random revelations that the world is not all that it may seem.

The secret to Dahl’s success as a children’s author is that he understands that most adults underestimate the capacity of young people to comprehend the world in all of its complexity and contradictions. Danny soon discovers that his venerated father is much more than he appears to be and his deep, dark secrets come spilling out into the daylight like long-lost treasures that have been carefully hidden at the bottom of a silent and ancient sea. Danny’s father inevitably stumbles into the arms of catastrophe and it is left up to Danny to save the day, which he does with courage and uncommon wit.

Written as a child’s first-person narrative, there is an intimacy to Dahl’s writing that invites the reader into a magical world that is wildly mysterious, yet strangely familiar. Dahl’s books are filled with sadistic brutes that terrorize the innocent, but the twists and turns of his plots are built around the inevitable triumph of kindness and love over cruelty and pettiness. In Dahl’s imagination, it is the children rather than the adults who finally face up to the Goliaths of the world and their weapons are always limited to their own intelligence, inventiveness and self-initiative.

Dahl attended British public schools, where corporal punishment, hazing and bullying by teachers and upperclassmen were not only permitted, but also encouraged. His hatred for this predation is self-evident throughout all of his writing.

It is Dahl’s preference for position startling and raw uproars of violence next to scenes of heartbreaking tenderness that his critics find most off-putting. Danny is viciously caned by the local schoolmaster, but then delicately ministered to by his father, who was similarly assaulted as a child. In many ways, Dahl’s book is a lonesome cry into the wilderness for the understanding and forgiveness that somehow escaped his life and it aches with the yearning for the innocence that can never be recovered.

Also unique to children’s literature is Dahl’s insertion of the eternal hunger game, where the working class poor are pitted against the privileged wealthy. Dahl never forgot the loneliness of being an outsider looking down the rabbit hole of a society that he could never truly enter.

Perhaps most endearing to his audience is Dahl’s irreverent and unrestrained inventiveness with words, which he catapults and somersaults into new forms and exotic sounds. Melodic, mischievous and irreverent adjectives such as “splendiferous” and “gloriumptious” can be found scattered throughout his vocabulary. As a young boy, Dahl’s teachers often criticized him for using words inappropriate to their actual meaning. But this playfulness and rebelliousness with the English language never really left him, even after he became a successful author. Much of Dahl’s love for wordplay came from his mother, who often entertained her children with transcendent tales of giants, goblins and witches taken from the mythology of her Norwegian childhood, and the power of her storytelling haunts Dahl’s writing. It was in the metaphysical world of the mythic that Dahl found solace from the harshness of reality and he gravitated to the roaring adventures of Kipling, Dickens and Thackeray, where he found the moral compass of his life.

The enduring appeal of Dahl’s books to his many young readers is his recognition that children are just as powerful and capable as adults, and his narratives are sown with small epiphanies and quiet eddies where the human spirit finds its voice among the static and hubbub of the commonplace. Slowly, then swiftly, Danny is forced to venture beyond the interlude of his small world and Dahl layers these delicious moments gracefully and expertly, allowing the dramatic arc of his story to ascend and intensify naturally before it arrives at its satisfying end. Ultimately, Dahl’s story is more than just another children’s book and its simple, timeless and irresistible tale speaks to the child in all of us who still resides in the deepest recesses of our hearts and will never leave us.