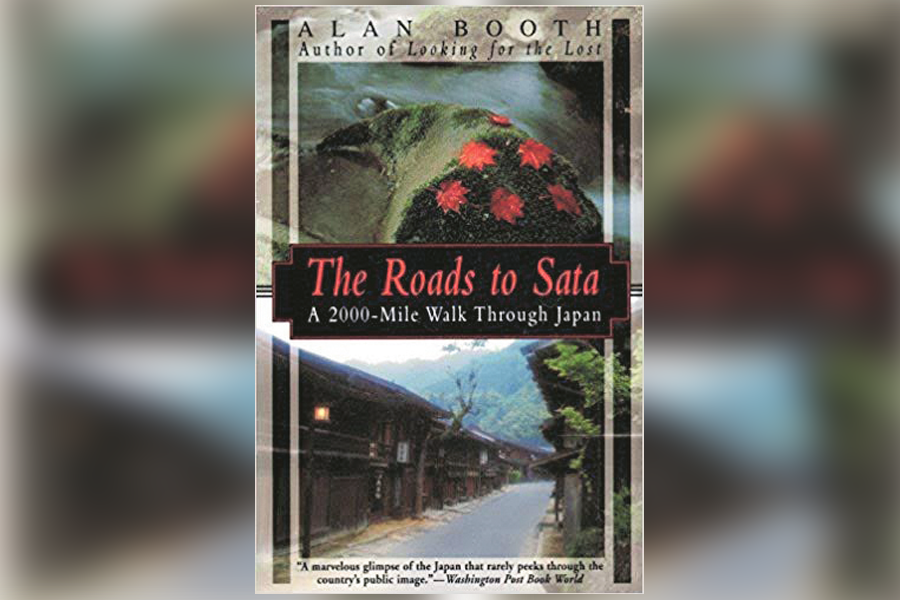 A Conflicted Journey in the Author’s Adoptive Home

In 1977, British writer Alan Booth decided to walk the length of Japan stretching from Cape Soya on the northern tip of Hokkaidö to Cape Sata on the southern rim of Kyüshü. Thirty-one years old at the time, Booth had already lived in Tökyö for seven years, but yearned to experience a more authentic connection with his adopted home that went beyond the opaque urbanity of his daily life. His 2,000-mile journey would take 128 days to complete and provide the backdrop for his first book, “The Roads to Sata,” that would record the complexity of being an outsider in an insular and narrow world that was often lost in translation.

Born in Leytonstone, London, Booth majored in drama at the University of Birmingham, where he studied Nöh theatre and directed Western classics replanted in Japanese settings. He moved to Tökyö in 1970 and lived in Japan for over twenty years, writing film reviews, teaching English and punching out popular essays that covered everything from kokeshi dolls to the namahage goblins of Akita Prefecture. It is his travel book, however, for which he is best remembered. Booth is sometimes compared to the razor-tongued Paul Theroux in his approach and style.

Readers looking for a romantic picture postcard of contemporary Japan may be disappointed, however: “The Roads to Sata” is not that book. Booth was a snarky, brittle and gifted curmudgeon whose quirky and dissonant observations of the human condition could be off-putting and bitter to the taste for the unprepared. Avoiding tourist-friendly hotels and government-recommended travel lodges, the author found respite in out of the way ryokan (Japanese-style inns) and minshuku (private homes) frequented only by locals and wandering mendicants. Booth’s Japan was filled with empty roads, desolate coastlines, and ancient villages interrupted with staccato bursts of industrial infernos, maddening highways and fractured English.

Like Odysseus navigating his way home, Booth is both fleeing the past and yearning for the future with every step he takes on his epic walk. Loneliness is the coin of the realm in this kingdom and it is the currency that permeates every page of “Sata,” no matter whether Booth is describing the geometrically perfect Sapporo or the abandoned backside of Japan. Even more telling is the loneliness of the author himself that ultimately informs and enriches this book beyond the predictable and ordinary. Booth is desperately searching to belong and his own pursuit of an unrealized homecoming is at the very heart of his story.

Fluent in Japanese language, history and customs, Booth is particularly sensitive to the slings and arrows suffered by all foreigners who must pilot their way through a provincial world that is often suspicious and sometimes hostile to anything that is different. “Sata” is filled with scenes from the underbelly of the Japanese soul and it makes for difficult, uncomfortable and bitter reading at times. Ignored, ridiculed and ostracized in a society that celebrates conformity, Booth concludes by the end of his adventure that he has learned little about Japan, but much about himself.

Fortunately, “Sata” is also filled with startlingly poetic descriptions of Japan’s natural beauty that are unaffected and unforgettable. It is often in the commonplace, however, that Booth finds his true character, and it is his attention to the often invisible strands of Japanese life that his writing rises above the noise of the crowd. Also interspersed throughout his book are quiet interludes and gentle eddies of human connection, where the writer is befriended, encouraged and welcomed by an assortment of fellow travelers, castaways and loners who recognize in Booth a kindred soul. In Hokkaidö, the author meets the grandson of a samurai whose family fled Shikoku in the wake of the Meiji Restoration. On the beach of Lake Shikotsu, Booth encounters a hermit who has turned his back on the bright lights of the big city, and in Mamurogawa, he experiences Obon in the northern mountains in all its simplicity and timelessness.

The problem with “Sata” is that despite its considerable eloquence, it never escapes the narrator’s lingering resentment of always being seen as a stranger from a distant shore. The dramatic arc of the book remains mired in a redundant soup of misunderstanding, caricature and ignorance from start to finish. Just as Booth is seen throughout his travels as an inexplicable and impenetrable cultural cutout, the author likewise views his tormentors through the same flawed lens. What Booth fails to deliver is a satisfying insight into why human beings are trapped by the superficial differences that often turn the unfamiliar into the unacceptable. Consequently, “The Roads to Sata” never rises above the crest of a sardonic travelogue because it perpetuates the old bromide of Japan being both inscrutable and unknowable, which is a low bar to aspire to indeed.

Twenty-four years after his pilgrimage, Booth’s second book, “Looking for the Lost,” would be published to glowing reviews around the world. Based on three shorter tramps through Kyüshü and Honshu, Booth had the perspective of an older man who, by that time, had lived much longer in Japan. Awakening the ghosts of the poet Osamu Dazai, the revolutionary Saigo Takamori and the star-crossed Heike clan, his writing in “Lost” is more tempered and meditative, as if he had acquired a level of peace that had eluded him in his younger years. In some ways, the author had finally found his way home, and, while his acerbic wit remained, his grasp of human frailty and the limitations of his own life had only deepened.

Alan Booth died of cancer in 1993 in the land he found eternally bewildering to his dying day but the closest to his heart. Like many of the people he wrote about, Booth had long struggled to find his place in the sun, but the journey he had begun in Soya so many years before had finally come to an end.