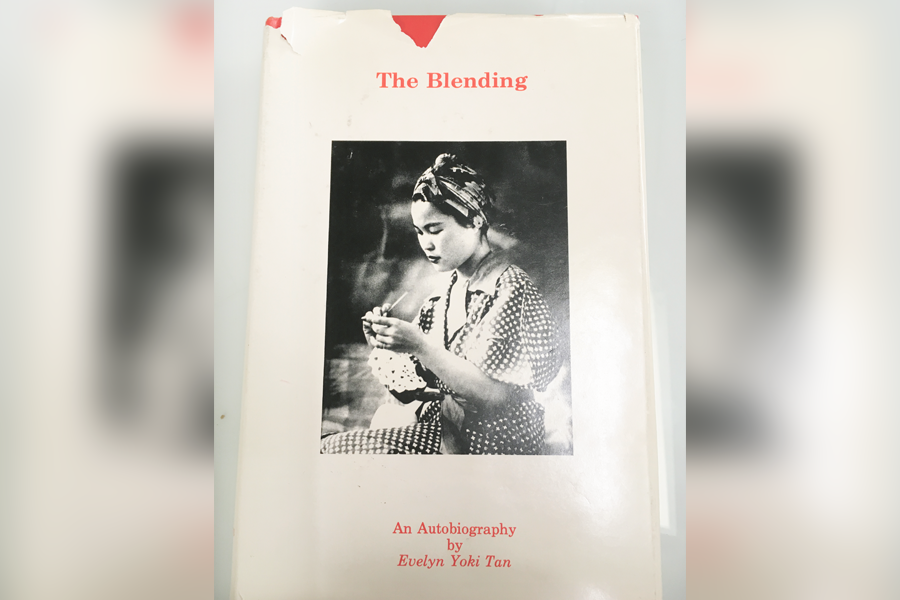 The Story of a “Gutsy” Woman in a Changing Hawai‘i

Former Secretary of State Hillary Rodham Clinton and her daughter Chelsea Clinton have been making the rounds of the news and talk shows, promoting their new book from big-time New York publisher Simon & Schuster, “The Book of Gutsy Women: Favorite Stories of Courage and Resilience.”

I recently read a book by a woman whom I consider “gutsy” in her own right. She was courageous and resilient every day of her life. Evelyn Yoki Shirota Tan didn’t live on a big stage like some of the gutsy women in the Clintons’ book. Yoki was born in 1916 in the rural East Maui community of Pe‘ahi — today known as the popular surf spot, “Jaws” — where her immigrant parents were pineapple growers. In 1978, Tan self-published her autobiography titled, “The Blending.”

Some people might not take her book seriously because it is an autobiography and self-published, at that. But I hope you’ll give it a read first before you draw a conclusion . . . if you can find the book. You’ll probably have to track one down from an online bookseller.

I think Maui-born writer/playwright Jon Shirota gave me the book many years ago. It was written by his eldest sister Yoki, whose name he often mentioned. I must have been distracted with something else because I never read it, until recently, when I came across it, tucked away in a drawer. A few weeks earlier, longtime friend Professor Katsunori Yamazato, the president of Meio University in Okinawa, had mentioned it during a breakfast get-together with my retired professor-sister Joyce and myself.

Decades ago, Yamazato-Sensei, who taught American literature and culture at the University of the Ryukyus prior to being appointed president of Meio, had studied at the University of Hawai‘i at Mänoa, where he earned his master’s degree in English. He has co-edited a couple of volumes of Mänoa: A Pacific Journal of International Writing with the publication’s resident editor, Frank Stewart.

At our get-together, Katsunori had praised Yoki Tan’s writing and her Nisei woman’s perspective, which is rarely detailed in books about the Okinawan experience in Hawai‘i. So when I came across the book in a zip lock bag, its cover a bit tattered, I started reading it. It’s a fast read because it’s very straight-forward.

The book looks like the printer took Yoki’s manuscript, set it in justified type, hit the print button on the press, ran it off and bound the printed pages as a hardcover book. The dust jacket cover is a photo of Yoki knitting something. The photo apparently won first prize in a Maui County Fair photo contest.

I doubt that Yoki had an editor review her manuscript — not even to correct spelling or grammatical errors — and there are a few. She wrote the Japanese words that her parents spoke just as she heard them: “Kailo (let’s go home),” or “Damale (keep quiet).”

“The Blending” is her story. If you discount the book because it lacks an editor’s touch, it is your loss.

Even as a child of 4 — where the book starts in a pineapple field in Pe‘ahi — Yoki was unconsciously storing away observations that she would later recall as she wrote her book. For example, she noticed that her older brother, Seiko, is treated like a prince while she was treated like Cinderella; she observed the interaction between her parents and other family members; she remembered the kindness of her teachers and the non-Japanese friends she made.

She recalled walking home from the pineapple field with her parents and Seiko.

“Okasan carried the baby, as well as the lunch pail and gallon bottle, and we walked home. Otosan never offered to carry the baby. He seldom spoke to me. He seemed preoccupied, but he was there and I loved him.”

She also remembered her father and Seiko coming to the table for dinner after her mother had placed everything on the table.

“Seiko pushed me and said, ‘Don’t sit here. This is not your place.’

“’Otosan turned to me and scolded, ‘Damale (keep quiet). You move away. You are a girl.’ I obeyed immediately.”

For much of her life, she saw her parents as one-dimensional: Okinawan immigrants singularly focused on returning to the old country. She, on the other hand, was growing up among neighbors and schoolmates of all ethnicities, which gave her multiple identities: Okinawan, Japanese, local, American.

As the eldest girl in the family of eight children, she was expected to look after her younger siblings. Everyone was expected to sacrifice so that Seiko could get a good Japanese education, which he received. After graduating from McKinley High School in Honolulu, his parents sent him to Japan, where he graduated from prestigious Waseda University. Seiko never returned to Hawai‘i to live. He made his life in Japan.

As the years turned into decades, her father began facing the reality that they would never be able to return to Okinawa and Yoki saw her parents, especially her father, slowly adapt. But not before she defied him and her mother by marrying a Chinese-Portuguese man, which left them furious. Even her usually subdued mother could not restrain herself.

Although Yoki and her husband, George Tan, lived in Hawai‘i, she remained estranged from her parents for nearly seven years. By the time she reconciled with them, she had a daughter who was 2 years old.

Yoki and George divorced a short time later. Their marriage was troubled from the start — George was restless and drifted from job to job. Yoki had tried to make the marriage work, but she knew when it was time for them to part ways. She gained full custody of their daughter and raised her as a single parent without the benefit of child support from George.

Her love for her parents and her siblings lasted forever. Oftentimes, she was a surrogate mother to her younger brothers and sisters. They could talk with her and know that she understood how they felt.

Yoki found success in own career. She was eventually appointed executive secretary of the Maui Chamber of Commerce.

She was “gutsy” in a nontraditional way. Despite her clashes with her parents as they held fast to their old country ways, she always tried to understand them and saw the best in them.

Her parents, Kamata and Uto Shirota, died within months of each other in 1950. Her father was the first to go. Of his passing, she wrote:

“After the brief and simple service, Father was buried in a public cemetery and not in the private Japanese cemetery. I had selected a lovely, quiet spot on the hillside overlooking Wailuku where people of all races were buried. Father had had difficulty adjusting and understanding the cultures of the western world, but had eventually become a westerner himself. His heart had melted and, having become a cosmopolitan, he had found love, peace and harmony among people who had once been strangers to him.”

Yoki Tan eventually moved to Salt Lake City, Utah, and then to Los Angeles, where her only surviving brother, writer/playwright Jon Hiroshi Shirota, continues to live. She died in 2003.