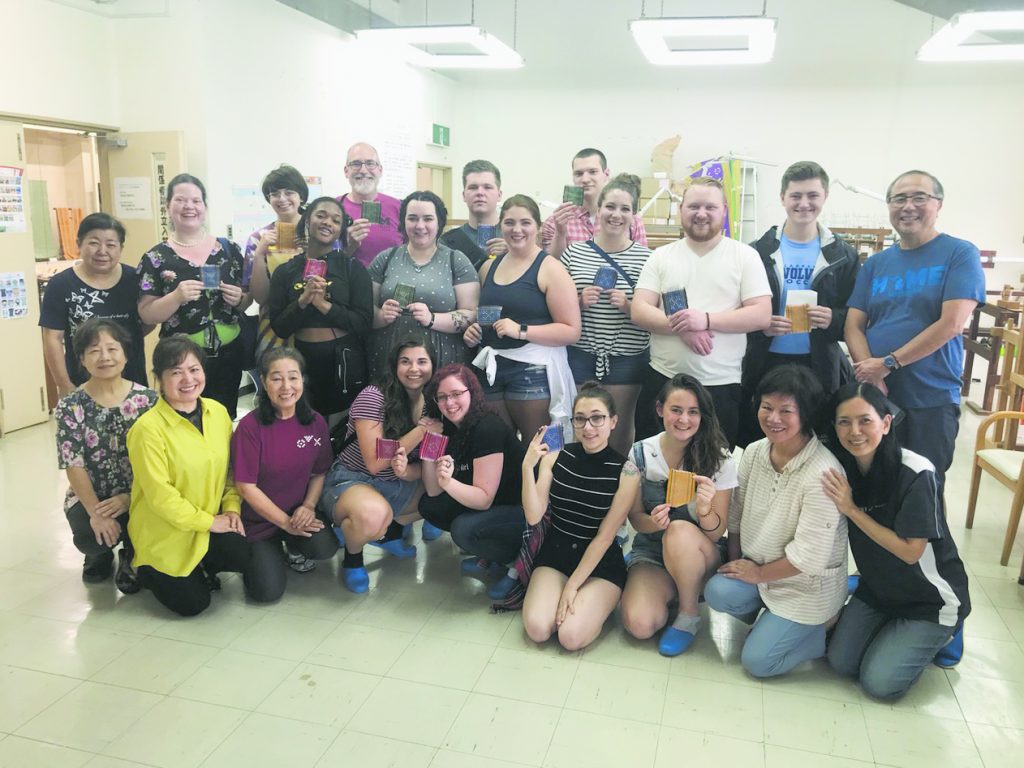 In March of last year, I was pleasantly surprised to receive some correspondence from Dr. Roy Hanashiro, a professor of East Asia and Japan history at the University of Michigan-Flint. Dr. Hanashiro, who was born, raised and educated in Hawai‘i, said he subscribes to The Hawai‘i Herald and has been following my columns.

He and I also connected immediately because his father, like mine, was from Kohala on the Big Island of Hawai‘i and had worked in the sugar cane fields, just as my grandfather had done. After earning his bachelor’s, master’s and doctorate at the University of Hawai‘i at Mānoa, Dr. Hanashiro settled in Michigan and began his teaching career at the University of Michigan-Flint in 1989. This year marks not only his 30th year of teaching at UM-Flint, but also his 10th year with the Wyatt Exploration Program (https://www.umflint.edu/history/wyatt-exploration-program), which takes UM-Flint students to countries around the world so they can experience the culture and history of that country firsthand.

Dr. Hanashiro said he would be bringing his third group of Wyatt Exploration students to Japan in May of this year. Previous groups had visited Kyöto, Fukuoka and Hiroshima. This time, he wanted the group to spend more time in Okinawa so that the students could experience and understand Japan’s diversity as well as Okinawa’s uniqueness. He also wanted them to see how Okinawan immigrants had retained their culture in a foreign land by having the Wyatt Explorers complete their tour in Hawai‘i before returning to Michigan.

Dr. Hanashiro said he has been reading my Hawai‘i Herald columns “with great interest.” (I had no idea that people that far outside of Hawai‘i were reading my columns.) He contacted me through the Hotel Sun Palace Kyuyoukan, where I previously worked, asking for my assistance in planning a meaningful Okinawa tour for 14 students who would be traveling with financial support from the Dorothea Wyatt Endowment. Dr. Hanashiro and fellow UM-Flint history professor Dr. John Ellis would be accompanying the group.

To get more than book information on Okinawa’s history, I asked three Okinawa Uchinanchu to share their experiences with the students and their professors. I asked Okinawa Hawaii Kyoukai member Choko Takayama to talk about Okinawan immigration abroad, especially to Hawai‘i, and about the Okinawa Heiwa Kinen Kouen (Okinawa Peace Memorial Park) in Mabuni, Itoman. I also asked Asami Ginoza to talk about the postwar support that the people of Hawai‘i extended to war-ravaged Okinawa by sending 550 pigs and other valuable supplies, demonstrating the deep ties between Hawai‘i Okinawans and the homeland of their ancestors. Finally, I asked former Okinawan prisoner of war Hikoshin Toguchi to share his Battle of Okinawa experiences, from hiding in a tight cave space in Mabuni for several days, to his capture, confinement in POW camps in Hawai‘i, and his return to Okinawa a year and a half later. 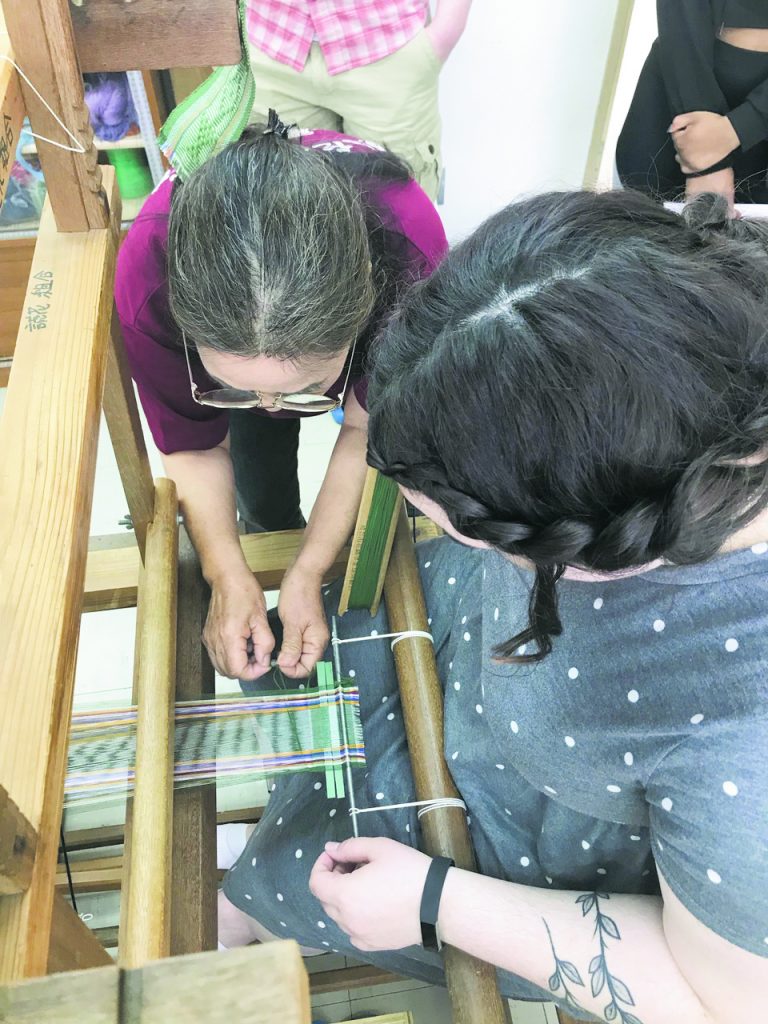 Dr. Hanashiro and I had a preliminary aisatsu (greetings/introductions) and chousei (coordination) meeting last December. And then in May of this year, I introduced him and the students to Takayama-san, Ginoza-san and Toguchi-san, who were finally able to share their knowledge and experiences at the Okinawa Heiwa Kinen Kouen (Okinawa Peace Memorial Park) and Himeyuri no Tö (Himeyuri Peace Museum) after the group had toured Okinawa island.

I wasn’t able to join them on their nanbu (southern) tour, but I caught up with the group at the Hanaui Weaving Museum in Zakimi, which is located close to the Yomitan Sonyakuba (village office) and Yomitan Chuugakkou (junior high school). Everyone removed their footwear and slipped on the museum’s house slippers and then engaged in some aisatsu with the museum staff. Five students then headed to the back room, where several looms were located for their hands-on weaving taiken (experience). Each student wove a coaster using one of three traditional designs of their choice: jinbana (economic prosperity), ojibana (prosperity of descendants) and kajimaya (longevity). 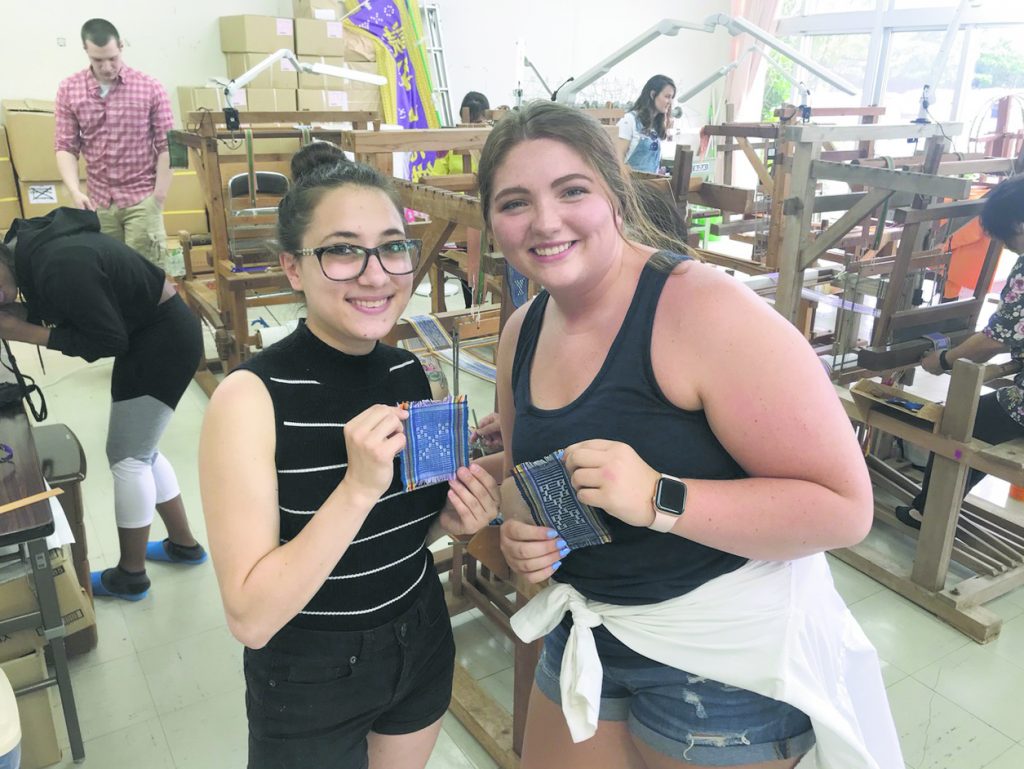 As the five students started their weaving, museum director Setsuko Ikehara introduced the rest of the group to the traditional art, which dates back over 600 years ago to when Taiki from the Uza area of Yomitan began trade relations with China in the late 1300s. That led to the creation of Yuntanza hanaui. “Yuntaza” is the old Ryükyü name for today’s Yomitan, and hanaui means “weaving” in Uchinaaguchi (Okinawan language). In Japanese, the term is hanaori.

The manufacturing art prospered for centuries, but then declined to near-extinction until a group of volunteers came together in 1964 to revive it. Ikehara-san explained the cultural tradition of women giving these woven fabrics to men. For example, a sister would put all her effort into making a piece, which she would give to a brother, her precious sibling, before he left for work somewhere. Her brother would wear that piece of fabric every day as a symbol of family love and protection. Ikehara-san also talked about the three traditional designs as explained earlier and other aspects of hanaui.

The third group of five, which included Dr. Ellis, took their turn at the loom. I took a picture of students Jilian Lueker and Haylee Skank with their coasters before the entire group gathered for a shot with the staff. They thanked Ikehara-san and her staff for the unique cultural opportunity.

We had more time to talk about Okinawa over lunch. As we ate, I encouraged Dr. Ellis to try adding some ko-re-gusu (awamori with chili peppers) for an extra kick in his bowl of soba.

We were enjoying some time exchanging information and thoughts when a wedding couple, all dressed up, came by with a photographer and the manager, who was escorting them as they took photos with scenes of Okinawa in the background. I explained that many people from mainland Japan, Korea and China hold their wedding ceremony in Okinawa and like taking pictures at various scenic locations in Okinawa, just as they do in Hawai‘i. Uza Beach and Zakimi Castle are popular sites for picture-taking.

The learning experience continued as the students wandered through Murasaki Mura. They broke up into smaller groups. I followed some of them and shared whatever history and culture I knew in the short amount of time we had together. Some of them said they appreciated being in Japan and experiencing the culture firsthand, which added a totally different dimension to what they are studying back in Michigan.

As they continued on their journey to Fukuoka, Hiroshima and Hawai‘i, I’m sure their tour will be a memory they will never forget.

Colin Sewake is a keiki o ka ‘äina from Wahiawä, O‘ahu, who served with the U.S. Air Force in Okinawa, where he met his future wife, Keiko. He decided to make Okinawa his permanent home. Colin retired from the Air Force and, later, from the Air Force Reserves. He and Keiko have two children and make their home in Yomitan.