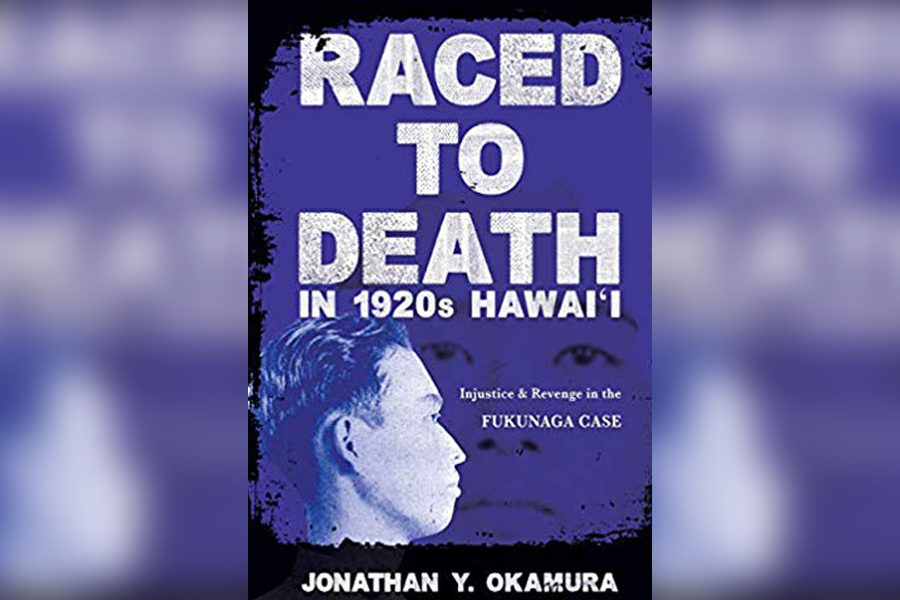 Many people like to read murder mysteries. But, as Professor Jonathan Okamura of the University of Hawai‘i’s Ethnic Studies Department notes, a murder can reveal much about race relations in the Islands before World War II. In his newly published book from the University of Illinois Press, “Raced to Death in 1920s Hawai‘i,” Okamura focuses on the life of 19-year-old Japanese American nisei, Myles Yutaka Fukunaga.

On Tuesday morning, Sept. 18, 1928, 10-year-old George Gill Jamieson was kidnapped from Punahou Academy. A short time later, his father, Frederick Jamieson, received a note demanding $10,000 in exchange for the boy. The kidnapper received some of the money, but the boy was not returned, so city officials informed the public about the abduction. Frederick Jamieson was a prominent Honolulu businessman so the police and sheriff’s offices and others were all mobilized to search for the boy and his kidnappers.

Gill Jamieson was already dead, however. He had been struck and choked to death in Waikïkï by Fukunaga, who was the sole kidnapper. Police traced Fukunaga by the serial numbers on the cash Frederick Jamieson had paid and arrested Fukunaga four days later. At the police station, Fukunaga confessed to the crime. The newspapers reported his confession the next day.

At this point, it becomes clear why Okamura titled his book “Raced to Death in 1920s Hawai‘i.” In the Sunday Honolulu Advertiser, city attorney Charles Davis declared Fukunaga guilty. He said Fukunaga knew that “what he did was wrong” and that justice should be “swift and speedy.” Fukunaga would thus be “raced to death,” in two ways: first, because of his being racialized as Japanese and a threat to haole hegemony; and, second, by requiring a speedy trial. Because of their involvement in the 1920 strike, Japanese Americans were seen as a menace to the haole community and the Big Five business interests. A race to judgment against Fukunaga was shown in the quick indictment, arraignment and rapid sentencing.

Okamura details the injustice in the trial, ranging from the incompetence of the defense attorneys to the deficiencies in the jury selection, the brevity of the psychiatric examination, the bias in the press leaks and the coverage and the speedy sentencing on Oct. 8. Various appeals failed. Despite pleas from the AJA community for clemency and life imprisonment instead of execution, Fukunaga was hanged on Nov. 19, 1929, at Oahu Prison.

The Fukunaga case is part of a larger argument posed by Okamura, who argues that colorblind justice and emergent multiculturalism are linked to an ideology of settler colonialism. They are aspects of a racial ideology to maintain power and privilege, as was seen in the notorious Thalia Massie case of 1931, which resulted in the killing of native Hawaiian Joseph Kahahawai and differential standards of justice — one for haoles and another for non-haoles.

Until World War II, race trumped class as an organizing principle of social organization in Hawai‘i. In this fascinating and informative book, Okamura also explains how an interracial and interethnic unity developed in the 1930s in the term “local” as contrasted with the haole term, “Other.”

“Raced to Death” author Jonathan Okamura will speak about the Fukunaga case and sign his book on Saturday, Sept. 21, at 1:30 p.m. at Barnes & Noble at Ala Moana Center.

He will also speak on Saturday, Oct. 18, at 10:30 a.m. at the Japanese Cultural Center of Hawai‘i. Both talks are open to the public.

Franklin Ng taught in the Anthropology Department at California State University, Fresno. He has authored and edited several works and serves on the editorial board of Amerasia Journal, Journal of American Ethnic History, and Chinese America: History and Perspectives. He also volunteers at the Hawaii Heritage Center, where he occasionally serves as a guide of Honolulu’s Chinatown.

Bulletin Board – VOICES OF JAPANESE INCARCERATION