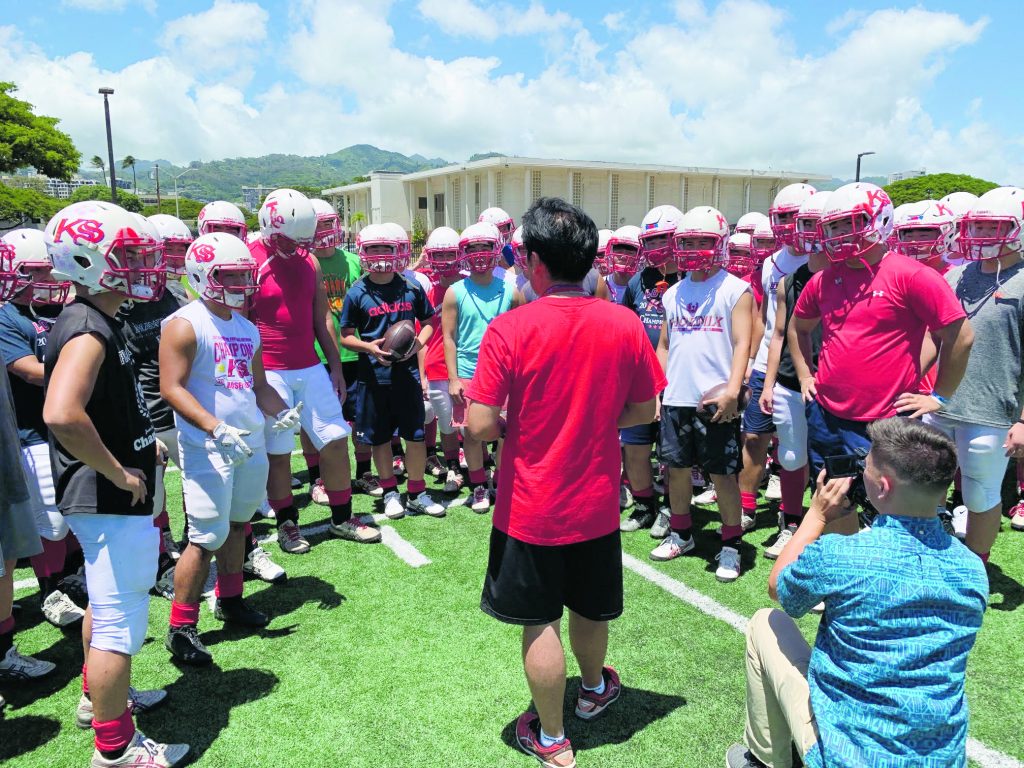 “East!” and “Green!” are some of the plays being called from the sidelines at a recent scrimmage at McKinley High School. But while the game of football is being played American-style on the field, the visiting team in the red and white jerseys are from the Far East. Tökyö, Japan, to be exact.

The Kosei Gakuen High School football team, Japan’s reigning national champions (2016, 2017, 2018), was in Honolulu for a week in late July to train and gain experience playing against Hawai‘i high school football players and to take part in a cultural exchange.

Football is everything at this prestigious all-boys private school that launched its high school football program in 1975. Kosei Gakuen has been a national titleholder for three consecutive years (2017, 2018, 2019) and boasts an impressive 45-game winning streak.

Kosei Gakuen quarterback Hiromitsu Kobayashi understands the pressure the team is under to uphold its reputation for winning championships. “My predecessors have won the championships, so there’s a lot of responsibility on my shoulders,” said Kobayashi, speaking through an interpreter. “So that’s why I want to learn a little bit more. With this chance to come to Hawai‘i and learn from a different team, I know we can scale up ourselves for another title.”

Kobayashi was one of 73 players and a dozen staff members who made the trip to the Islands. While here, they stayed in the dorms at the University of Hawai‘i’s Mänoa campus.

Their team name is “Lotus” — named for the flower that can be seen in any muddy lake or river. The lotus flower represents the team’s values and culture: a strong, beautiful flower with roots planted securely beneath the surface of the water that never fails to bloom. For Kosei Gakuen, it embodies the essence of teamwork. In the coaches’ minds, each player is important and has a place on the team, so they practice hard with the mentality of “honesty, humility and gratitude.”

The fundamentals are drilled into the players and the team practices discipline by following the directions of their elders. The Kosei Gakuen players also demonstrated gratitude each time they played, bowing before stepping onto the field.

If the team loses, they accept the loss with humility and respect for the game, said head coach Takashi Kobayashi. He knew the teams they were scrimmaging against in Hawai‘i had a height and weight advantage over his Kosei Gakuen players.

“In order to play against a team that is much bigger and may have a lot more speed, if they’re able to strategize and be able to defend against a team like that, they can take that back to Japan and uphold their status championship for another year,” said Coach Kobayashi.

This unique cultural exchange began with a connection between Kosei Gakuen trainer Tsuyoshi Kase and recently retired UH trainer Jayson Goo, who introduced Kase to Pat Silva, McKinley High School’s head football coach. Silva developed a plan and shared it with several other high schools, and together, they came up with the players’ itinerary.

“For all of us, all the teams, it’s going to be a good learning experience,” said Coach Silva. “Good for these kids to learn American football, and for our players to see their work ethic while they’re doing their practice,” he added.

“Having the right attitude, all those things come into play. That’s something that we’ve been preaching here at McKinley,” continued Silva. “Having all those qualities and values and, more importantly, making sure that you’re solid.”

Building friendships over a love of football was also part of the week’s game plan. The Hawai‘i teams hosted a dinner one night so the players could mingle off the field and learn more about each other. It also provided an opportunity for the coaching staffs from the schools to bond.

It wasn’t all work and no play for the Lotus, however. The players toured the UH Mänoa campus and took in some beach time at Hanauma Bay before heading back to Tökyö with memories of the aloha spirit they had enjoyed and sharpened football skills for another run at the national title.

Jill Kuramoto is chief communications officer and client development director with RKT Media. She is also an associate with Pineapple Tweed Public Relations & Marketing. Additionally, Kuramoto is a member of the selection committee for Honpa Hongwanji Mission of Hawaii’s Living Treasures of Hawai‘i program and an active member with the Honolulu Japanese Chamber of Commerce.