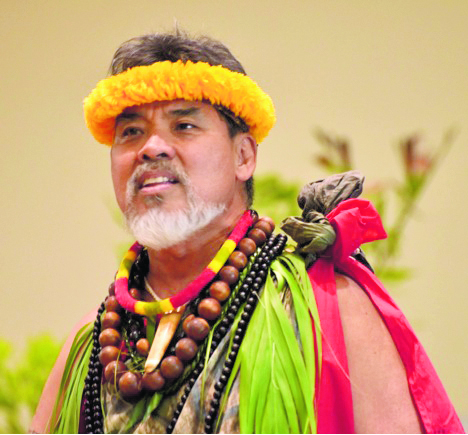 Teaching the World a New Approach to Conservation

Samuel ‘Ohu Gon III, is a respected master Hawaiian chanter and a conservation biologist. The Honpa Hongwanji Mission of Hawaii recognized him as a Living Treasure of Hawaii in 2014 for his work in biocultural conservation — melding Hawaiian culture with conservation. Like many people of Hawai‘i, Gon is a man of mixed ancestry. He is about half Japanese, and learned that he is also Chinese, Hawaiian and Native American, according to a recent DNA analysis.

In December of 2018, the British Ecological Society invited Gon to give the opening keynote plenary address at its annual meeting in Birmingham, England. The members had seen his presentations on biocultural conservation and wanted to hear about this new approach to ecological endeavors.

The society is famous for its scholarships and publications dealing with various aspects of culture and ecology. It was launching a new journal to be called “Man and Nature.” Gon’s work intrigued the society and it desired to hear directly from him because his approach is important to the future of ecology and conservation of nature. His presentation was well received, and many members said that it was the best plenary address the society had heard. Gon said, “I was deeply honored to share that intersection of Hawaiian knowledge and values with the complexities of ecology and conservation.”

Gon was born in Honolulu and graduated from McKinley High School. Then he attended the University of Hawai‘i at Mänoa and majored in zoology. He was the first UH student to fulfill his language requirement in zoology using the Hawaiian language, making him a trailblazer in this regard. To do this, he had to obtain the support of his college advisor and two other professors to plead on his behalf to allow the Hawaiian language as his language requirement, which today, has become a common practice. He also attended the University of California, Davis and attained his master’s degree in zoology and a Ph.D. in ethology (animal behavior).

Today, Gon is the senior scientist and cultural advisor at The Nature Conservancy of Hawai‘i, a nonprofit conservation organization. He has worked in the conservation of Hawaiian plants and animals for over 40 years.

He explained his interest in Hawaiian chanting, “Hawaiian chant is part of the oral tradition of Hawai‘i and Polynesia. It is a major source of traditional knowledge of Hawai‘i, its environment and people, and an important personal connection for me to the place of my birth.” Ironically, he grew up in Hawai‘i at a time when it was against the law to teach the Hawaiian language in the public schools.

Hawaiian chant, or oli, is deeply woven into all aspects of Hawaiian life. For example, there is an oli to identify yourself and ask for permission to enter a place, such as a friend’s property or a sacred site. There were oli or pule (prayer) for planting, growing and harvesting, for rain or clouds, to start the day well before the sun rose in the East, for offering gratitude to the household gods before eating, for the birth of a child, the blessing of a new house, and to convey “aloha” to a person who had passed away. Each of these oli would be in a different style, like a wailing, emotion-filled kanikau (dirge chanting) to a beloved who had passed, or in a low voice, in a nearly inarticulate prayer at the start of the day, or in a clear-voiced calling across the threshold or far distance, or the rapid-fire recitation of long genealogies of high-born chiefs and royalty.

A part of the appeal of the oli is its deep complexity. The Hawaiian language is full of multiple meanings, layers of purposeful ambiguities and metaphoric references to people, places, and legends that convey underlying emotional or moral messages. For example, Gon explained, “To mention the singing of land snails evokes immediately stories of searching for a beloved or desired person, while mentioning the hala (pandanus) might refer to the passing of someone. A chant describing the downpour of rain of Hanalei conveys either intense love, or sorrow, or even the feeling that one has been unfairly or harshly treated.”

His road to master Hawaiian chanting was roundabout. It started when Gon’s wife, Sheri, was undergoing ‘üniki (promotional training) as an ‘ölapa (dancer), at the hula hälau of Kumu John Keolamaka‘äinana Lake. Gon assisted his wife and the other students undergoing ‘üniki, taking them on hikes to help them find dye and cordage plants as part of their training. They all knew of his fluency in the Hawaiian language, his interest in oli, and his knowledge of Hawaiian plants and animals. Accordingly, they encouraged him to contact Lake and sit in his papa oli (chant class). He started with Lake in 1995 and, eight years later underwent ‘üniki as a kahuna käkalaleo (chant and ceremony practitioner) in 2003. Before he passed away in 2008, Lake requested that Gon continue his chant classes. As time went on, Lake informed his students that Gon would serve as his voice because Lake’s ailments affected his voice. After Lake’s passing, and with his written direction, Gon and Kumu Mähealani Kauka Wong took on the mantle as co-kumu of Lake’s hälau on O‘ahu – Hälau Mele. Hälau Mele is currently the hälau-in-residence at the Bernice Pauahi Bishop Museum in Honolulu.

Many hula hälau include oli in the training of the dancers, but few are dedicated primarily to chant and ceremonial protocols as Lake had established. The school of chant in Hälau Mele was called Nä Wa‘a Lälani Kähuna o Pu‘u Koholä. The students can choose to focus on chant or hula, or study both.

Each hälau is unique to the family lineage that has passed hula and/or oli down through the generations. Lake’s family included both chanters and dancers, but his training included experiences from his ancestry and from other lineages. This is becoming more common in modern training.

Each lineage has different vocalizations and styles of chanting. Many Hawaiians can learn the different styles simply by listening to and emulating other chanters, or even recordings, which is a direct or indirect learning of chants “by ear.” Again, Hawaiians are adept at the oral tradition, and learning through listening and repeating is called ‘a‘apo – “to grasp.” Over time, the most skilled students learn to “grasp” and memorize chant lines the first time they hear them.

There are sacred chants which are the voicing of pule to certain Hawaiian deities and subject to kapu (sacred restrictions) that prevent the chanting — except during the correct time and circumstances — such as rituals for certain deities. Some chants are conducted only by the ali‘i (rulers) and kahuna (priest and experts) who are trained in the proper protocols of the rituals.

Because of the deeply poetic and symbolic nature of the Hawaiian chants, Hawaiians excelled in composing modern songs, once introduced to Western music. The importance of songs today is embodied in all aspects of Hawaiian life. When the Hawaiian Renaissance flourished in the 1960s and 1970s, one of the initial expressions was a huge growth of contemporary songwriting and virtuoso performances that continue today, going hand in hand with the resurgence of the Hawaiian language. Gon mentioned, “Oli is also riding the Renaissance ‘wave’ and I am deeply grateful to be part of this cultural revival.”

Certain chants are pule and ceremonies that are designed to provide communication with the ancestors in deified form called ‘aumäkua, and their presence can take different physical manifestations called kinolau. For example, in the forms of animals living on land and in the sea or other natural phenomena, such as the wind, rain, and scents. They frequently communicate through dreams.

As for chanting, Gon hopes that the practice continues to grow, so that oli becomes more and more a normal part of life in Hawai‘i. In this way, future generations can continue to express their connections and aloha to the lands and people of this very special place. Gon has deepened this connection through his work in biocultural conservation.

Before Gon started chanting, he had learned the hula kahiko (ancient dance form). He began his lessons from Kumu Ho‘oulu Cambra in 1976, and danced in her hälau for a few years. Then, he joined Kumu Ed Kalähiki for a year before leaving Hawai‘i for his graduate studies. After he returned to Hawai‘i and married, he joined Lake’s hälau, first as a chanter, and then as a hula dancer.

It is truly amazing that a person whose ancestors are of diverse races and cultures is now a renowned master Hawaiian chanter, who will carry forward an important part of Hawaiian culture to the future. As he relates, “Though I carry many ancestral lines from different parts of the globe, I was born in Hawai‘i. Hawai‘i will ever be my home, and through oli, I can strongly connect with the place that nurtured me, and made me who I am.”