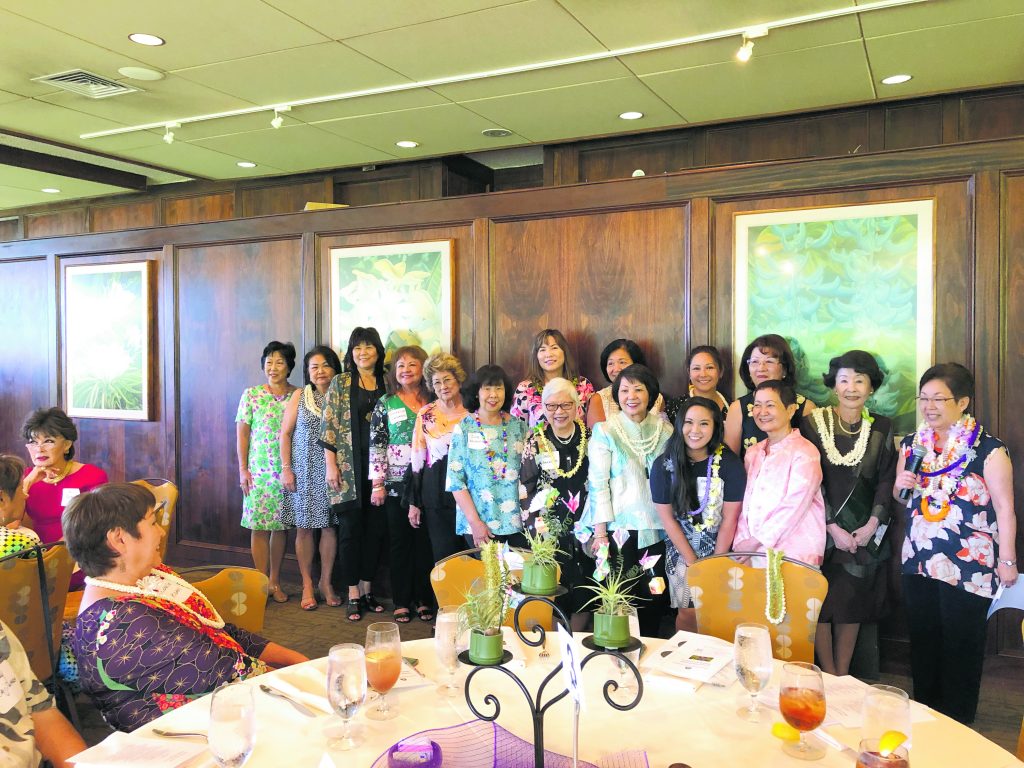 The Japanese Women’s Society Foundation installed 18 officers and committee directors for 2019-2020 at its general membership meeting and luncheon on Sunday, July 28, at the Oahu Country Club. JWSF members and guests enjoyed the Nuuanu Ballroom’s panoramic view of the ocean and mountains under a clear blue sky.

A bake sale, silent auction and lucky drawing preceded the meeting and luncheon program, which was emceed by Sheree Tamura.

In her president’s message, Takahashi highlighted the organization’s contributions to the community, such as its Friendship Tea program in which members gather at Kuakini’s Hale Pulama Mau auditorium on the first Sunday of each month to entertain care home residents. Members bring teatime refreshments and plan entertainment, crafts or games for the elderly.

Other items on the agenda included the introducing of seven new members; a grant awarded to Nippon Culture Day, represented by Amy Young; and a $3,000 scholarship awarded to Elisabeth Seamon. Seamon has a bachelor of science in psychology, a master’s degree in social-behavioral health and is currently in her third year at the University of Hawai‘i John A. Burns School of Medicine where she is training in geriatrics.

A $10,000 donation was presented to Kuakini Health Systems, represented by its president, Gary Kajiwara.

Misako Ito, wife of Consul General Koichi Ito, gave the keynote speech entitled “Reiwa Era.” She explained that the interpretation of “Reiwa” is “beautiful harmony” and is based on a poem from the “Monyoshu” — a famous anthology of Japan’s ancient poems.

Sen. Kidani presented a certificate to the family of the late Cathy Iwai, who served as president from 2017 to 2019. Iwai passed away in April. The certificate acknowledged her contributions to the community. As she had promised, her husband, Brian Iwai, played the piano for the event while attendees bonded.

Kathy Inkinen was also surprised with a certificate from Kidani. Inkinen has served on several community boards, including JWSF.

To close the luncheon, Jan Terakawa sang a medley of songs by the Carpenters, in memory of Cathy Iwai, and the popular enka song, “Naniwa-bushi Dayo Jinsei Wa.”