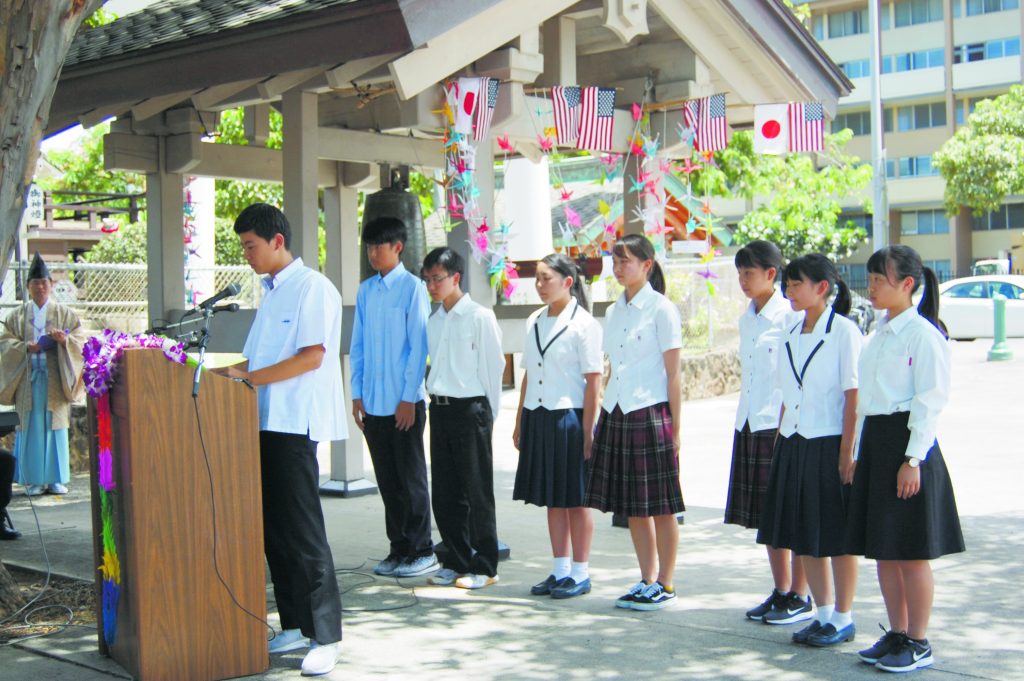 Seventy-four years after the atomic bombings of Hiroshima and Nagasaki, which ended World War II, calls for world peace and the preservation of humanity were front and center at anniversary commemorations in Honolulu and in cities around the world for both bombings. Approximately 140,000 people were killed on August 6, 1945, when the United States dropped the first atomic bomb on Hiroshima. Three days later, an estimated 70,000 more were killed in the bombing of Nagasaki. The attacks were the world’s first use of atomic warfare and led to Japan’s surrender just days later. Beyond that, however, they would provide the only tangible evidence of the devastation of atomic warfare.

The 30th Annual Hiroshima Commemoration and Peace Service was held at Izumo Taishakyo Mission of Hawaii on Aug. 6. Guests from both Honolulu and Hiroshima offered speeches, performances and blessings in remembrance of the anniversary. Among those in attendance were Honolulu Mayor Kirk Caldwell, Consul General of Japan Koichi Ito and Honolulu Hiroshima Kenjin Kai president Wayne Miyao. 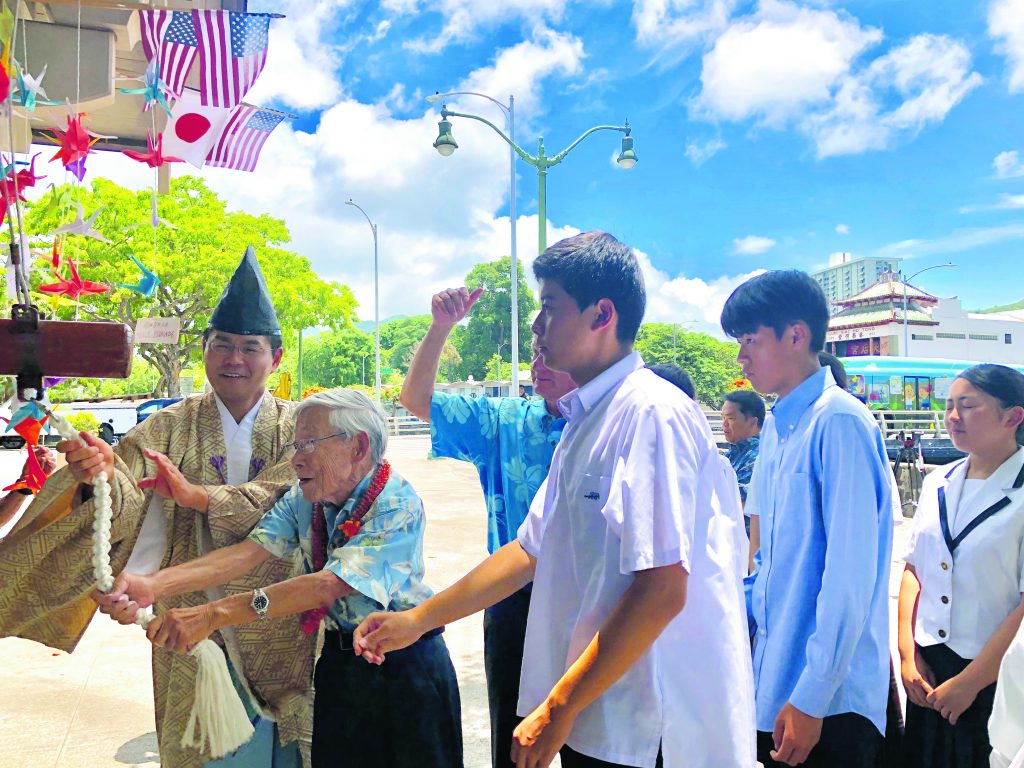 In his remarks, Mayor Caldwell spoke about the 60th anniversary of the Hiroshima and Honolulu sister-city relationship. He mentioned “rebirth, regrowth and renewal” as goals in maintaining the bond between the two cities and in working towards a communal aspiration of world peace. Caldwell also called attention to the direction America’s current administration is taking in dealing with hate crimes and violence. He said it is crucial that it be countered with peace. The mayor said the anniversary of the Hiroshima bombing serves to reinforce the need for domestic and international peace in the aftermath of the mass shootings in El Paso, Texas, and Dayton, Ohio.

The event’s keynote speaker was Hawai‘i banking executive Lawrence Fumio Miwa, who survived the bombing. The 88-year-old Miwa was 14 when he began keeping a diary of his life in Hiroshima during and after the bombing. The Miwa family’s story, “Tadaima! I Am Home,” authored by Tom Coffman and published earlier this year by the University of Hawai‘i Press, is framed around Lawrence Miwa’s diary.

In his speech, Miwa recounted the events of that day, from the “yellow flash” of the bomb to the “vast space covered in ashes in every direction” after the attack.

“I felt like I was alone in the world and was driven to despair,” Miwa said. “It was like the end of the world and I had no idea what to do.”

He concluded his speech, saying, “We are all human beings living on one precious planet. We all have a duty and responsibility to preserve humanity for our children and future generations.”

Students from Hiroshima Minami High School were also in attendance at the ceremony. The nine-member group presented a message of peace to the audience, emphasizing how important it is that the next generations learn about and remember the events of Hiroshima and Nagasaki. As time passes, they explained, the opportunity to hear the stories of the events firsthand is diminishing drastically. Today’s youth, by commemorating the anniversaries of the bombings and advocating for the banning of nuclear warfare, are now doing their part to fight for world peace for posterity.

Peace was a running theme throughout the event. In her opening message, Dr. Soetoro-Ng spoke of the need for community efforts towards world peace. Councilmember Pine, who traveled to Japan to participate in a conversation on world peace, explained that her own life was touched by the events of Pearl Harbor, just as many were affected by the bombing of Nagasaki. “We have to remember that peace is the only answer to conflict,” Pine said.

Religious leaders from the Hawaiʻi Bahá’i Community, Honpa Hongwanji Mission of Hawaii, The Cathedral of Saint Andrew and the All Believers Network shared messages of how advocating for world peace affects people of various beliefs. The wide range of faiths represented at the ceremony emphasized the importance of global participation in the fight for peace and symbolized the unity present in us as human beings.

Sunflowers are used to detoxify soil and water of nuclear waste and have also become a tangible tool against violence and a symbol of peace. The Honolulu chapter’s goal is for sunflowers to be planted in personal gardens, parks, and schoolyards and throughout the community to demonstrate devotion to the elimination of nuclear violence.

Both events were rooted in advocacy for the preservation of peace and acceptance of future generations. With the development of advanced nuclear weapons, North Korean missile launches seemingly becoming a common threat, and the United States’ recent withdrawal from the multination Iran nuclear agreement in May 2018 and, more recently, the Intermediate-Range Nuclear Forces Treaty, it was even more important to commemorate the anniversaries of the bombings.

Lawrence Miwa summed it up best at the Hiroshima event: “No one, especially our children, should ever experience the horrors of nuclear weapons. For me, I thought it was the end of the world . . . But, I am afraid if it happens again, this time around, it will surely be the end of all our lives.”

By remembering and acknowledging the devastation of Hiroshima and Nagasaki, we, as human beings, can effectively work towards peace before it is too late.

Both ceremonies concluded with the ringing of replica peace bells of the two cities by all of the attendees. The bells were presented to the City and County of Honolulu as gifts. As the bells rang, their sound carried throughout not only the temples after the ceremonies, but also in the hearts and minds of all who will never forget.

Kacie Yamamoto served as The Hawai‘i Herald’s summer intern. The Moanalua High School graduate just began her freshman year as a journalism major at the University of Southern California. 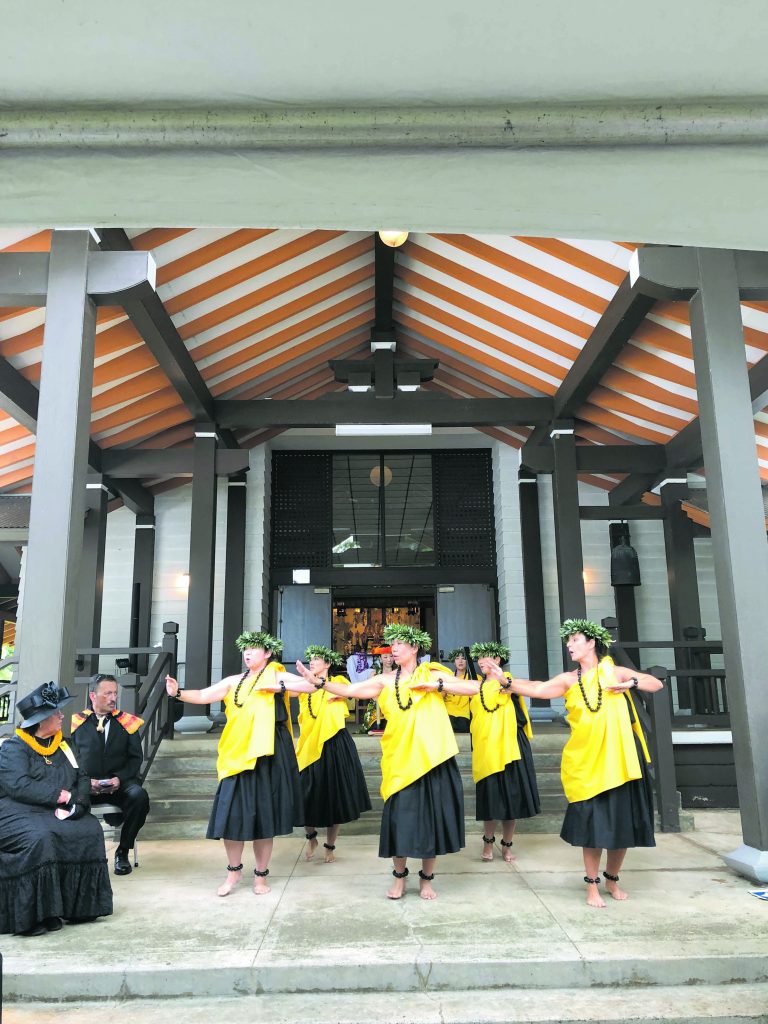