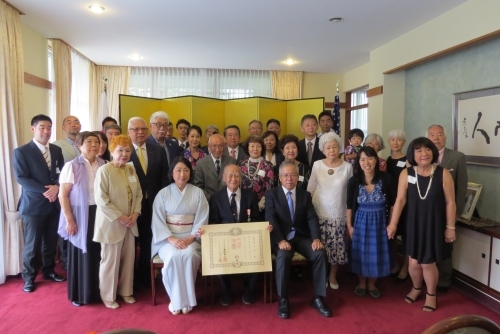 Noboru Hayase and Dr. Robert N. Huey were recently conferred imperial decorations by the Government of Japan. The decorations were presented by Consul General of Japan Koichi Ito at his official residence.

Noboru Hayase, who served as president of the Hawaii Meijikai from 2011 to 2018, was presented The Order of the Rising Sun, Silver Rays, on June 27. He was recognized for his effort to honor the spirits of the Meiji Era immigrants who settled in Hawai‘i by maintaining the Makiki Cemetery, where the remains of many are interred, and for continuously paying tribute to them.

On July 10, Consul General Ito presented The Order of the Rising Sun, Gold Rays with Neck Ribbon, to Dr. Robert N. Huey. Huey has been a professor of Japanese literature at the University of Hawai‘i at Mänoa since 1985. He was recognized for his role in the development of Japanese studies in the United States and for strengthening the friendly ties and mutual understanding between Japan and the United States. Huey is noted for his expertise in classical and medieval Japanese poetry, Japanese culture in the Ryükyü Kingdom and Okinawan studies. He previously served as director of the UH Mänoa Center for Japanese Studies. (by Kacie Yamamoto) 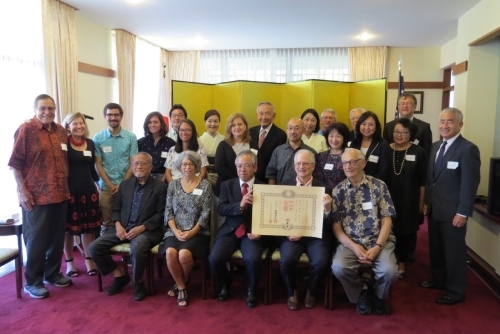