Recently, I have thought that there is a need for more children’s books about Okinawan culture. And I was so excited when author Lee Tonouchi, who calls himself “Da Pidgin Guerrilla,” announced that he and illustrator Laura Kina were working on a children’s book entitled “Okinawan Princess, Da Legend of Hajichi Tattoos.” I thought that if I had a children’s book to teach me about the beauty of my heritage, I would not have felt like an “ugly Japanese girl.”

I am a yonsei of Okinawan and Japanese ancestry. I remember being in sixth grade, thinking that I was an ugly Japanese girl because Okinawans were often categorized as Japanese, or at least that was how I perceived it. I guess I pulled more from the Okinawan gene pool, as my body was a little thicker and browner than other fair-skinned Japanese girls at my school and my eyebrows were two large fuzzy caterpillars. 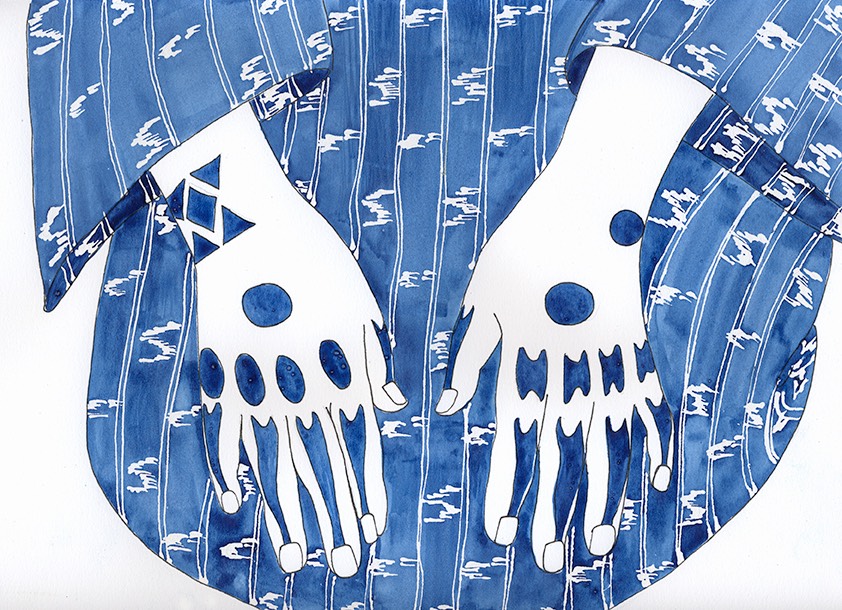 I was in my 20s when I learned that Okinawans eat pigs feet soup, have a funny language called Uchinaguchi that sounds something like Cantonese, and our people came from pig farmers and fishermen. I suppose my grandparents did not want to share how their life on the plantations of Hawai‘i was filled with discrimination. Even today I hear stories of Okinawans being teased, “Okinawa ken ken buta kau kau,” reducing Okinawans to pig slop. The singsong derogatory intonation provoked feelings of hurt and anger.

When I read Tonouchi’s story, I thought the main character was a lot like myself and many other young girls who looked at Vogue magazine and watched music videos and wished they looked like Cindy Crawford. When “Gramma” sees this, she shares the story of her mother, who was made fun of when she moved to Hawai‘i to work on the plantation. She also reveals the legend behind the hajichi tattoos, about an Okinawan princess who was kidnapped by Japanese pirates and how putting tattoos on her hands helped her to outwit her captors.

I asked my sister-in-law, Christie Tomasa, and her daughters, 10-year-old Isabella and 6-year-old Leyna, what they thought of the book. It was their first time learning about their Okinawan ancestors having tattoos. Isabella said, “I thought [the book] was good and easy for kids to understand.” Little sister Leyna said, “I liked the tattoos.”

The book also opened up a conversation with my mom, Sharon Tomasa, who told her grandchildren that their issei great-great-grandmother, Tsuru Takara, had hajichi tattoos when she arrived from Yomitan, Okinawa, in the early 1900s to work on the plantations of Hawai‘i.

At first, I wasn’t sure how I felt about a book about Okinawan culture written in a Pidgin voice since I thought Okinawan children’s books are needed all over the world. However, the story is one that empowers women and celebrates our local multiethnic culture brought by our immigrant ancestors; Pidgin English is a huge part of that.

In addition, Masashi Sakihara, a linguist of Ryükyüan languages, translated the story into Japanese and Uchinaguchi. My nieces and my sons are not able to read Japanese, so they were not able to get an idea of what Uchinaguchi is like from this book.

On the flip side, this book could serve as a bridge that teaches Japanese nationals about our blended cultures here in Hawai‘i.

Kina’s use of vibrant colors in the illustrations is similar to bingata, a traditional Okinawan art of resist dyed fabric that usually depicts subjects of nature. It was also fun for my nieces to look for the Okinawan dancer doll who had a different pose or facial expression throughout the story.

There is a part where Kina illustrated Gramma, making a two-knuckle fist to threaten her granddaughter with a megosa. If you grew up Okinawan, you know that it is similar to being threatened with a “knuckle sandwich.” From my mother, it sounded something like, “No run in da house, or else I going geev you one megosa!”

Following the story, the book includes an informative section that explains how hajichi tattoos became a sign of a woman’s social status. Most women got their tattoos between the ages of 17 and 23, before marriage. When a woman turned 37, the tattoos would be enlarged and more designs would be added when her first grandchild was born.

Kent Sakoda, a professor at the University of Hawai‘i at Mänoa and author of “Pidgin Grammar: An Introduction to the Creole Language of Hawai‘i,” explains the origins of Pidgin English in Hawai‘i. This is followed by an explanation of the origins of Uchinaguchi by illustrator Kina.

Overall, the story of the Okinawan princess was enjoyable and informative. Tonouchi’s Pidgin and ’80s humor makes it fun for parents, too. This is a book of female empowerment, teaching young girls that smarts and inner beauty will take you farther in life than good looks. If I had read this book when I was 10, I would at least have some definition of what being Okinawan was. Maybe I would have seen more than a funny looking Japanese girl.

Tonouchi is a local Okinawan yonsei known as “Da Pidgin Guerilla” for advocating Pidgin English to be accepted as a legitimate language. His book, “Significant Moments in da Life of Oriental Faddah and Son: One Hawai‘i Okinawan Journal,” won the Association for Asian American Studies Book Award for Poetry/Prose.

Kina is a hapa yonsei Okinawan artist and educator who lives in Chicago. Her artwork addresses Asian American and mixed race identities and histories with a focus on Okinawa and Hawai‘i diaspora. She is a professor of art, media and design at DePaul University.

“Okinawan Princess, Da Legend of Hajichi Tattoos” is published by Bess Press. The book retails for $18.95 and is available from Bess Press website (https://www.besspress.com/okinawan-princess), in Kaimukï at Da Shop and at Sugarcane, Bookends in Kailua, Homegrown in Pearlridge Shopping Center, Nä Mea Hawai‘i in Ward Centre, Japanese Cultural Center of Hawai‘i and at Costco.

The official book launch will be held Saturday, Aug. 17, from 9 a.m.–1:30 p.m. at the Hawaii Okinawa Center Serikaku Chaya. Attendees can purchase books and have them signed by Tonouchi and Kina.

They will also be signing books at this year’s Okinawan Festival on Aug. 31 and Sept. 1. The time has not yet been announced.