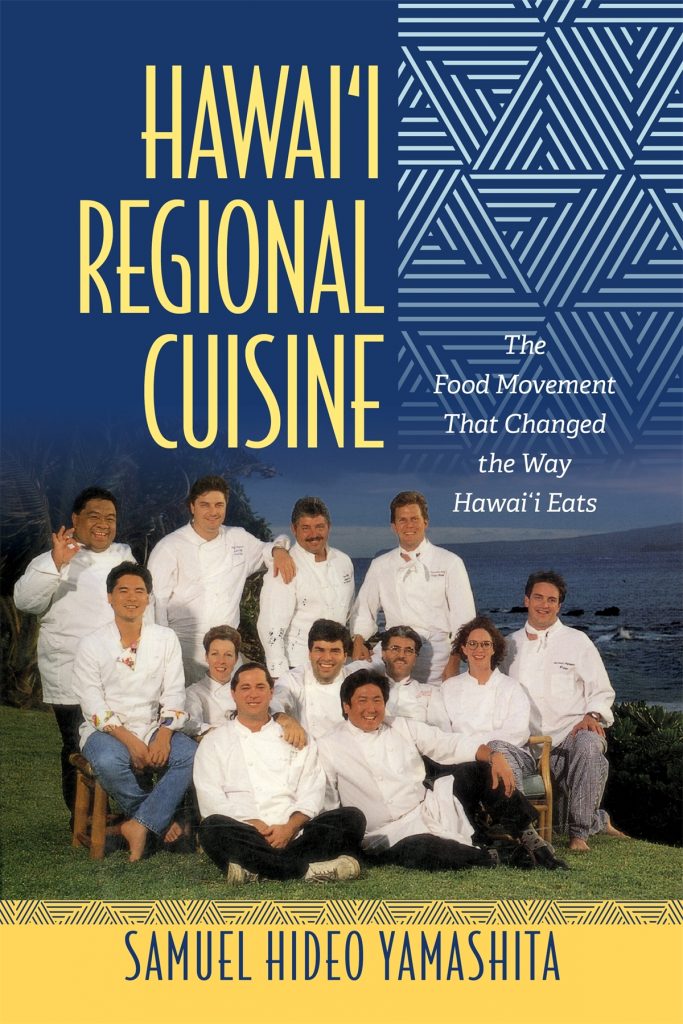 The Food Movement That Changed the Way Hawai‘i Eats

Today, we take for granted that our restaurant food will have influences from all ethnic groups and that the freshest Hawai‘i farm vegetables will be showcased. But this wasn’t always the case.

Professor Samuel Hideo Yamashita reminds us about fine dining in Hawai‘i nearly 30 years ago. The Kailua native, who now resides in California, has written a scholarly historical book titled “Hawai‘i Regional Cuisine: The Food Movement That Changed the Way Hawai‘i Eats,” published by the University of Hawai‘i Press. His name may sound familiar to Herald readers — his late father, Hideo “Hide” Yamashita, was a well-known baseball umpire.

Yamashita had a great idea to look back at those chefs who coined the phrase “Hawai‘i Regional Cuisine.”

Over the years, Yamashita returned to Hawai‘i and interviewed chefs and other food experts. He brings his expertise as a history professor at Pomona College in Claremont, Calif. He speaks Japanese and is considered a specialist in Japanese history and World War II. He owes his success to Mid-Pacific Institute.

“I was a terrible student, but I wanted to be a baseball player, so I boarded at Mid-Pac,” Yamashita said. “Because there were mandatory study hours, I learned to be a good student,” he said of his years at MPI.

In 1991, Peter Merriman brought together 12 chefs for a meeting at the Maui Prince Hotel to discuss a new way of highlighting the products of local farmers and ranchers. Chef Roger Dikon and entertainment guru Shep Gordon were instrumental in arranging this meeting. The chefs convened and dedicated their efforts to incorporate more Hawai‘i-grown ingredients and local styles of cooking into Hawai‘i’s high cuisine. Many are still cooking today and influencing our restaurants.

You still hear of them as leaders in our culinary world. The group and their affiliation at the time included:

Most were executive chefs at high-end hotels and lamented the lack of local produce being served. Many of the chefs, like Dikon and Ferguson-Ota, planted their own home gardens in order to be able to serve fresh vegetables, instead of imported food from the U.S. mainland.

At that time, local food was looked upon as “second-class.” In an interview I had with Chef Dikon in June, he said pre-Hawai‘i Regional Cuisine restaurants used frozen mahimahi (dolphin fish) and iceberg lettuce and tomatoes shipped in from the U.S. mainland.

Today, we have the luxury of enjoying locally grown herbs and vegetables in our dishes. Before the HRC movement, it was commonplace for the high-end restaurants to serve French, German or cuisine from other European nations, rather than Asian or Hawai‘i food.

Some of their innovative dishes sound dated today. But 28 years ago, a pineapple or lychee salsa or macadamia nut-crusted ‘öpakapaka (pink snapper) was breaking the strict rules created by European chefs that were running the hotel kitchens.

Yamashita was inspired to write this book after seeing soy sauce and chili pepper water in entrees at the high-end Mauna Lani Resort’s CanoeHouse restaurant. Alan Wong was the chef there at the time. Yamashita and his wife were shocked to see those condiments, which they thought were only used in local, home kitchens.

Yamashita credits Roy Yamaguchi for really inspiring the movement. Yamaguchi had created Euro-Asian cuisine successfully in Los Angeles and was able to translate that Japanese-influenced cooking in Hawai‘i.

Yamashita argues that the HRC chefs changed the way we eat today in at least three ways:

• They showed the world that ethnic cooking is not second-class;

• By encouraging farmers and ranchers to raise product for their restaurants, they helped the producers become more profitable; and

• They created innovative dishes that utilized the freshest products and local ingredients.

The book is valuable in its scholarly review of existing articles, books and some first-hand interviews. It falls a bit short by incomplete research and because Yamashita hasn’t lived in Hawai‘i since the mid-1980s.

Unfortunately, Yamashita should have interviewed four of the 12 HRC chefs. Roger Dikon moved back to Hawai‘i seven years ago and was available. Chefs Padovani and Josselin are easily seen at their establishments, and Chef Strehl is on the East Coast and could have been reached. Yamashita focuses on Chefs Yamaguchi and Wong, who are, undisputedly, talented, but skips over the accomplishments of the other chefs.

Also, I would have liked to hear the views of Bev Gannon and Amy Ferguson-Ota, who were the only two female cooks in those male-dominated days and are still in the culinary world.

Yamashita’s book is very plodding and more of a scholarly document. Some of his wording shows a lack of familiarity, such as calling Ko Olina “north of Pearl Harbor,” or Ed Kenney’s former spot on Monsarrat Avenue “upper Kaimukī” instead of Diamond Head or Kapahulu.

However, these criticisms are minor compared to the research he gives us.

The book comes alive mainly through Yamashita’s interviews with the newest chefs, young talents like Kevin Chong, Wade Ueoka, Andrew Le, Sheldon Simeon, Ed Kenney, Michelle Karr-Ueoka and others, at the end of the book. Yamashita insightfully notes that these post-HRC chefs now focus on recreating the foods they grew up with on their kitchen tables. They acknowledge the influence of the HRC chefs.

Kenney coins the phrases “Local, Fresh, Served with Aloha Always” and “Hawaiian Sense of Plate.” Yamashita quotes Le as saying his cooking is “one-part Continental . . . and one-part Vietnamese. So, it’s a combination of both.”

Yamashita’s “Hawai‘i Regional Cuisine” book is a valuable addition to our food history in Hawai‘i. Let’s hope he continues the research.

Samuel Yamashita says his wife is a better cook than he is, but he does make a few dishes. During the hot summer months, he likes to prepare Hiyashi Chuka (Japanese-style cold Chinese noodles) and makes his own dressing.

Cook the noodles according to the package directions. Drain, place in ice water to chill, then rinse well and drain again. Place in a flat bowl. Arrange toppings. Mix together homemade sauce of shoyu, two vinegars and oils. Pour over noodles. Enjoy. Serves two.

“Hawai‘i Regional Cuisine: The Food Movement That Changed the Way Hawai‘i Eats” by Samuel Hideo Yamashita; 200 pages, available in paperback for $19.95 and $68 for hardcover.