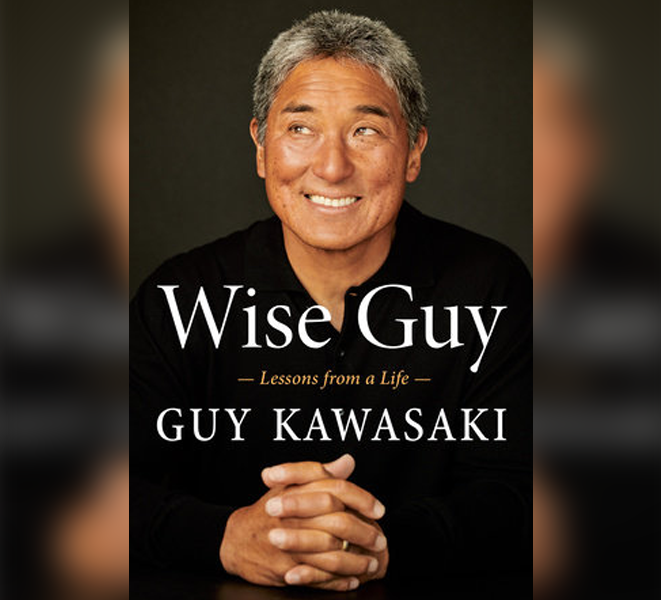 Lessons From a Life

For many local readers of The Hawai‘i Herald of a certain generation, Guy Kawasaki is best known as the son of the late local politician, Duke Kawasaki, and only secondarily as a local boy who made it good in the world of high tech in California’s Silicon Valley.

But for those who follow the high tech and venture capital scene, Guy Kawasaki is so popular that he is “the Guy,” literally needing only his first name to be recognized . . . like pop stars Madonna, Cher or Lady Gaga. His techno nerd fans gather around him after his talks and workshops, hoping that some of his business magic might rub off on them.

Kawasaki’s latest book, “Wise Guy: Lessons from a Life,” is a self-help compendium of breezy anecdotes about lessons gleaned from a life that reads like local boy goes to big bad Mainland and makes fantastically good. His electric, charismatic and slightly mischievous smile is a signature sign of “the Guy,” gracing many of his book covers, including this one. The photo is part of the tone of the book: breezy, mischievous, sometimes revealing and often funny. The lessons that Kawasaki imparts range from corny to the deep end of life.

Kawasaki first hit the big time as an Apple evangelist, charged with trying to popularize the then-new Macintosh computer at user groups, computer conventions and among individual users. He then moved on to various ventures, running his own high tech companies, funding start-ups, returning to Apple under co-founder Steve Jobs, leaving again and then becoming a venture capitalist, funding promising start-ups.

Along the way, Kawasaki ended up, almost as an afterthought, writing books. “The Macintosh Way” was his first book and, like many others afterwards, focused on what he thought made a business (Apple under Steve Jobs) successful and not so successful. As he continued writing, his subject matter expanded to include books in the self-help genre, such as his book, “Hindsights.” In the latter, Kawasaki interviewed people from all walks of life about what they valued and learned, including a former mobster and the late Harry Eto, a Hawaii Ki-Aikido sensei.

Like Kawasaki’s other books, this book in the booming genre of personal self-help is arranged simply. Each chapter focuses on one element of building a successful life, full of meaningful family interaction, social life, and work and play, all in balance. He fleshes out life lessons that resonate with many local ethnic families, but attuned towards a wider audience beyond our shores. In other words, Kawasaki credits the values he learned as a young man in Hawai‘i for his business and personal success: education, hard work, keeping your word even if it means short-term loss for long-term integrity, paying attention to your family and children.

The writing is very cleanly arranged with a basic theme for each chapter, a couple of amusing anecdotes and then the greater lessons learned from the experience. Chapter Two, for example, is on the value of education. He gives props to his parents, who scrimped and saved to send him to ‘Iolani School.

As a kid from the blue-collar neighborhood of Kalihi, he gained a first-class education. The private school also forged important connections to friends whose parents were white-collar workers (and it led him to envy the cool and expensive cars that his friends’ parents had, which was a simple motivator for him, at that age, to do well in school and have a successful career).

His horizon broadened and he eventually attended Stanford, accelerating his educational background and worldly experiences. He calls out his high school teachers by name and credits them for inspiring him to excel. And then in his “Wisdom” sections, he bullet-points the lessons he gathered from the experience. Like his teacher, Trudy Akau, Guy writes that you should step out of your comfort zone and go over and beyond to help people. You should thank those people who shaped your life positively before it’s too late to do so. You should study with the toughest teachers because they will make you a success later on.

For aspiring young entrepreneurs or anyone wishing to successfully follow a path that balances business and personal success, the book is an easy-to-follow inspirational and aspirational pep talk.

What may be a fault, and perhaps inevitable, is that the entirety of the book may be too glib. But that could be the problem with the entire genre of self-help and personal motivation, not just of this one book. It can be too easy to read the book and feel good about reading it because it agrees with your beliefs, and then you sit back and do nothing about your wretched situation except go and read another book. It becomes self-serving, but not enough to get you off of your ‘ökole and do something to really change your life.

As Kawasaki himself concedes, he was born into a situation that gave him a leg up. He wasn’t born with a silver spoon in his mouth. He didn’t inherit any great wealth. His ancestors left grueling farm life in Japan for greater opportunities in Hawai‘i. His parents set examples for him of an honorable work ethic and the importance of family life. His father’s political connections got him part-time jobs that introduced him to business mentors. And his family scrimped and saved to give him a good education with inspirational teachers. Kawasaki admits that he took advantage of these foundational building blocks to get a leg up on his life.

But there is never any guarantee of success. Kawasaki was in the right place at the right time (he admits this, as well) and had the right bulldog attitude to survive in the fast-paced world of the early Apple computer.

The problem is that the book, like many pop culture self-help books, doesn’t fully address young people who are at the bottom of the barrel of life. These are the young men and women who are barely hanging in there because they have little of the foundations that helped scaffold Kawasaki’s own success. Maybe they had parents who did not pay much attention to them as did Kawasaki’s parents. And/or they had terrible, incompetent teachers in failing schools that just warehoused them for 12 years. They had no exposure to people who had professional success to act as positive role models. Their peers are jerks that are no help in getting them out of their rut. They will never have enough financial support from their family and entry-level work to move away from their zip code (geography can be destiny that can be changed, as Kawasaki notes how going to ‘Iolani changed the trajectory of his life as a wild kid from Kalihi). To top it off, because of such vicissitudes, their own personal attitude is underdeveloped and wildly immature. There are numerous academic studies on all the reasons why students fail, why some young people fail at work, and why such underperformers statistically die younger and are in more ill health. The reasons are myriad, the results the same.

But again, this is not a book for young people on the very low end of the curve, who would not be motivated to even read this book.

Like all his other books, Kawasaki’s bright, acerbic and straightforward attitude shines through, perhaps even more so because this book may be his most personal and most autobiographical. For those young people who are motivated, this will be a great pep talk on balancing a positive family life with rewarding work. But for those who lack the basic foundations and personal motivation, a stronger sort of interventional medicine is called for.

“Wise Guy: Lessons from a Life” by Guy Kawasaki was published by Portfolio/Penguin Press, $28 hardcover at most bookstores or online book outlets.

Disclosure: The reviewer has met and interviewed Guy Kawasaki on several other occasions for The Hawai‘i Herald.